5 Ways of Looking at an Old English Sheepdog 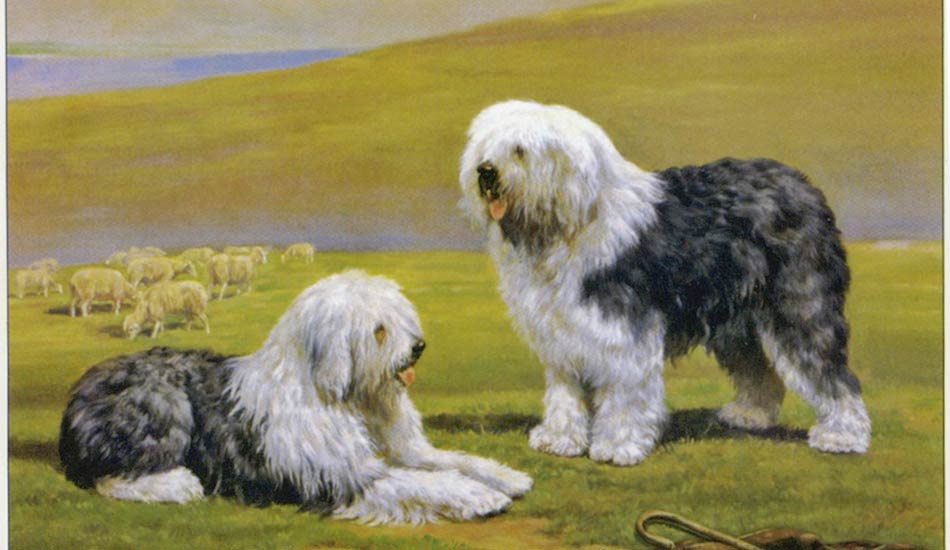 From “Times Past,” AKC Gazette:

1. Say “shaggy dog” and the Old English Sheepdog is the breed most people think of first. Beneath the profuse double coat is a square, muscular, big-boned herding dog standing 21 or 22 inches at the shoulder. Their eyes (when you can see them) are dark brown, or blue, or sometimes one of each; the nose is big and black. The OES breed standard tells us the skull is “capacious and rather squarely formed, giving plenty of room for brain power.” —WOOFipedia.com.

2. They can be dreadful teasers, with a merry glint in a half-buried, shining eye, huge bluffers, and very stubborn indeed if not treated with proper respect. Their hamming instinct has upstaged many a professional entertainer, upset many an obedience degree, and is a constant source of surprise and delight. They take a relaxed and comic view of life’s pressures and problems. They are most unsophisticated, uncomplicated, completely sincere creatures, unable to hold a grudge. —Serena Van Rensselaer, Breed Manual of the Old English Sheepdog Club of America.

3. While not a lazy dog, the breed does tend to have a casual approach to exercise. The suggestion of “walk” is not normally met with great enthusiasm, and if you put a dog on its own in a 10-acre paddock, when you return you will probably find it unmoved! The opportunity to accompany its owner on a leisurely stroll, however, will invariably prove sufficient motivation. —Andrew Brace and Anne Rogers Clark, The International Encyclopedia of Dogs

4. “God put hair over the sheepdog’s eyes so that he could not see the faults of those he loved.” —Anonymous

5. I remember John was amazed at seeing me being so loving to an animal. He said, “I’ve never seen you like that before.” I’ve since thought, you know, he wouldn’t have. It’s only when you’re cuddling around with a dog that you’re in that mode, and she was a very cuddly dog. —Paul McCartney on Martha, his Old English Sheepdog