The Rescuers: Breeds Who Save Lives 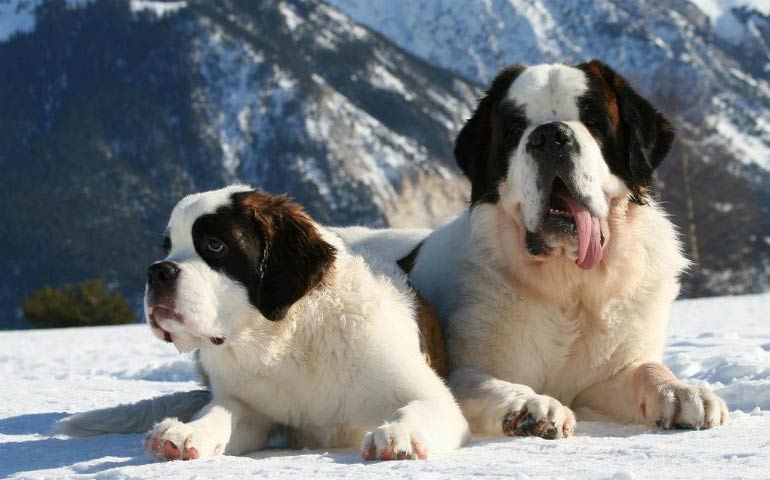 It’s a well-worn cliché that dogs are “man’s best friend,” but surely there can be no greater act of friendship than to save a person’s life. Two different breeds, the Saint Bernard and Newfoundland, were developed to do just that.

Rescuer of the Alps: The Saint Bernard

There is only one pass through the Alps between Italy and Switzerland. It is more than 8,000 feet above sea level and covered with snow for most of the year. Crossing through the pass was so dangerous that in about 1050, an Augustine monk established a monastery and a hospice there to provide aid and shelter to travelers.

Over the centuries the monastery continued, and in the 1660s the monks who lived there acquired several dogs. Most likely these were descended from mastiff-like dogs brought from Asia to Italy by the Roman legions.

At first the dogs probably served mainly as watchdogs and companions during the monks’ long periods of isolation in winter. However, it was found that the dogs had an uncanny sense to detect impending avalanches, so the monks began to have the dogs accompany them on the perilous mountain footpaths in the area.

By 1750, the monastery’s dogs were being assigned to accompany travelers through the dangerous pass. The dogs had a strong sense of smell and could find unfortunate souls who had been lost in the snow, so the dogs were sent out in groups of two or three to find lost or injured travelers. They would locate the person and dig him or her out of the snow. Then, while one dog went back to the monastery to bring help, the rest would lie around or on the stranded person to keep him warm.

As depicted in paintings, the original rescue dogs were well built and had a short coat that was white with reddish-brown markings.

By this time, the monk who established the hospice had been canonized as St. Bernard de Menthon, and the pass was named the Great St. Bernard Pass. And the breed of dog was called … Hospice Dog. Or Monastery Dog. Or Holy Dog, or Mountain Dog. Or Alpine Mastiff, or Swiss Alpine Dog, or any of a number of other names as well. It wasn’t until 1880 that the breed was officially recognized—in Switzerland, at first—as the Saint Bernard.

In the 1830s, the monks tried breeding their dogs with Newfoundlands. The idea was that if the dogs had longer hair, they would be more cold resistant. Instead, the longer hair got clotted with ice, which was the opposite of what the monks wanted. So they gave away the mixed dogs to the people in the surrounding valleys. After a few decades of interbreeding, the dog that developed and was recognized in 1880 looked more like the modern Saint Bernard than did the earlier dogs.

It’s said that the dogs at Saint Bernard rescued more than 2,000 people over the years. The last reported act of heroism occurred in 1897, when the dogs found and rescued a 12-year-old boy. Saints continued as work ing dogs in various capacities, including drafting and carting.

The Newfoundland breed is still rescuing people today. Coast Guards in England, France, and Italy take Newfoundlands on patrol with them.

The breed seems to have been made for water rescue. Newfoundlands are strong, brave, and gentle. They have webbed feet for strong er paddling. Their ears lie close to their head so water doesn’t get in. Their well-muscled tail can be used as a rudder, and their two-layer coat repels water.

How many of these advantages happened to develop naturally, and how many were bred into them? It’s hard to say. English fisherman and explorers in the 1600s went to Newfoundland, a large island off the eastern coast of what is now Canada, and found dogs who were large, strong, natural swimmers. They brought some dogs back to England, and the breed was refined there.

The name “Newfoundland” was applied to the dog by the 1700s, and for more than a hundred years after that, few sailing ships would head out of port without at least one Newfoundland on board. Lewis and Clark took Lewis’s Newfoundland, Seaman, along on their “Corps of Discovery” expedition.

The breed is credited with saving hundreds of lives by rescuing floundering swimmers or even towing boats safely to shore. Just as some breeds compete in field trials, Newfoundlands compete in water tests. Exercises include fetching objects that are under water, fetching floating objects in the correct order, leaping from a boat to retrieve a floating paddle, observing three swimmers and bringing a life preserver to the one who is floundering, and carrying a line to a person in a boat and then towing the boat to shore.

Newfoundlands and Saint Bernards both have physical characteristics that enable them to save human lives under difficult conditions. However, it is their shared personality qualities—both breeds are gentle, brave, and loyal—that make them want to do it.