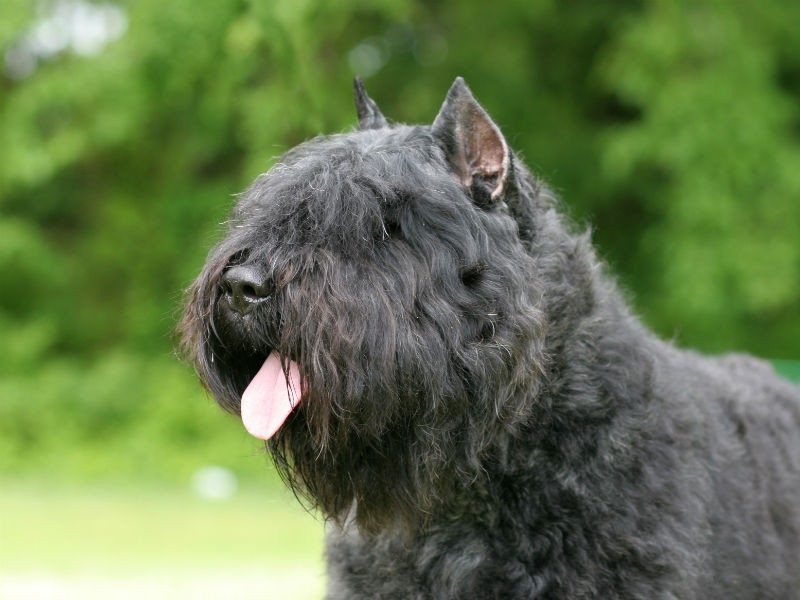 The Bouvier des Flandres (often shortened to Bouvier) is a large and powerful breed from the Herding Group, with a tousled harsh coat. These rugged-looking dogs were first developed for herding and driving cattle in Flanders, an area that used to cover parts of Belgium.

The Bouvier is also known as the “Koehond” (cow dog) and “Toucheur de Boeuf” (cattle driver). These names reflect the breed’s heritage as a hard-working farm dog. The farmers and cattle merchants in the region didn’t want the expense of several specialized breeds of dog to help them on the farm, they wanted one all-purpose breed. So they developed the Bouvier des Flandres. Besides working the cattle, the Bouvier was also used to pull carts for transporting products to market, guarding the farm and livestock, and even churning butter.

During World War I, Flanders became a battleground, and Bouviers took on a whole new line of work—carrying messages and pulling ambulance litters. Many dogs were lost during the fighting, and the breed nearly became extinct. Thankfully, a few dedicated people saved the Bouvier when they brought dogs to France and the Netherlands. Bouviers were also introduced to North America in the late 1920s. These brave dogs served again during World War II, and the breed again became endangered.

Bouviers are still holding jobs today. You might find them working a farm in many of the traditional ways, or instead serving humans in new positions, such as police dogs, search and rescue dogs, military dogs, or guide dogs for the hearing impaired or the visually impaired.

Another nickname for the Bouvier des Flandres is “Vuilbaard,” which means dirty beard. Along with its long, full fall (the hair over the eyes), the Bouvier’s long, lush beard is one of its identifying characteristics. Although these dogs are distinguished and attractive, their beards require frequent brushing and washing to keep them free of debris.

Bouviers have a double coat with a thick, rough, weather-resistant outer coat over top of a fine, dense undercoat. They are light shedders because most shed fur is trapped in the coat rather than falling out around the house. They need weekly brushing to remove that trapped hair and prevent mats from forming. The coat also needs to be trimmed regularly, either at home or by a professional groomer, every 6-to-8 weeks.

The Bouvier des Flandres is an energetic and highly intelligent breed. They need daily exercise for both their bodies and their minds. Positive daily training will also give your Bouvier a job to do, which is beneficial for this breed with a working heritage. In addition, their instinct to herd is strong, so you might find your Bouvier herding you, your children, and your guests around the house. A training program that teaches your dog how to express those instincts properly will prevent inappropriate behavior.

Bouviers are also fearless and protective, making them wonderful guardians. It’s important to safely expose your Bouvier to a wide range of people, animals, and situations in a positive way. These experiences will help teach your dog how to suitably channel his guarding instincts.

If you’re willing to put in the effort to intensely socialize your Bouvier des Flandres and maintain a life-long positive training program, you’ll be rewarded with an even-tempered, serene, and loyal family companion.