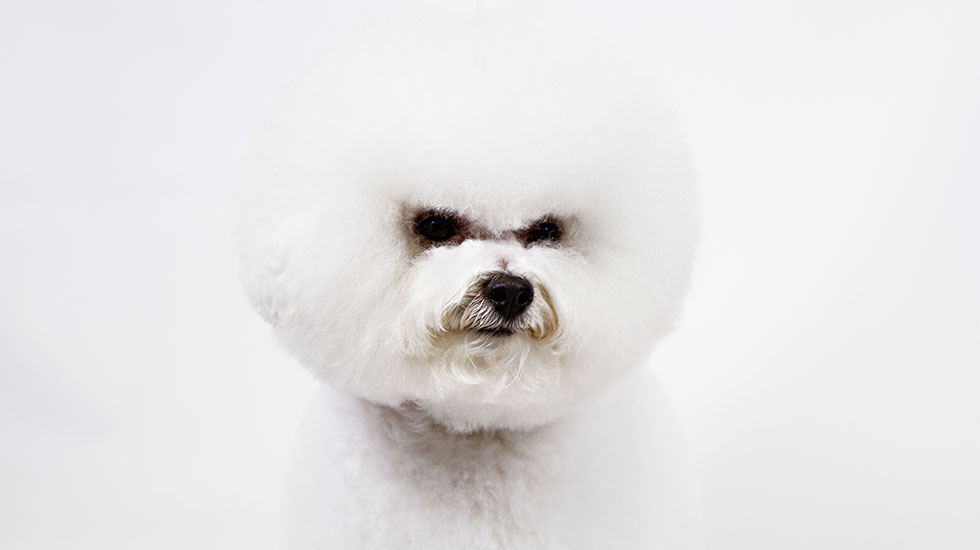 The adorable Bichon Frise (BEE-shon Free-ZAY) is among the canine kingdom’s great survivors, relying on charm and intelligence to weather history’s ups and downs. Bichons Frises have withstood world wars, revolutions, and the fall of empires by eagerly adapting to whatever challenge fate has sent their way.

Here are four snapshot looks at the roles Bichons have played on the stage of history.

The informal grouping of what can only be called “little white dogs” has exerted a fascination among royals and aristocrats for so long that we can’t say for sure how it all got started. We do know that small lapdogs were bartered around the Mediterranean basin for millennia. (For more on dog trading among the ancients, see “The Maltese, Toy Dog of Myth and Legend.”) Cleopatra, so the legend goes, was a “little white dog” fan.

More formally, members of this canine clan are known as Barbichon-type dogs, an umbrella term for such breeds as the Bolognese, Havanese, Maltese, and Bichon Frise. It is thought that these breeds began their modern development on Tenerife, the largest of the Canary Islands. One of these breeds became so closely associated with the island that it was known as the Bichon Tenerife. Quick, clever, and pleasing to the eye, the petite Bichon Tenerife dog became the primary ancestor of today’s Bichon Frise.

The breed’s close association with European nobles began sometime in the 13th century. Most notably, they endeared themselves to the royal courts of Spain, Italy, and France, and came into their own during the Renaissance.

Elaine Waldorf Gewirtz wrote in the AKC Gazette of how the Bichon’s irresistible charm could lead to some odd behavior among Europe’s crowned heads: “King Henry III of France (1574–1589) was so enamored of his Bichons that he carried a few whenever he went in a tray-like basket suspended by neck ribbons. Recognizing a trend, the court ladies adopted the same odd form of transport.”

We know a lot about the Bichon’s career as a royal lap warmer thanks to the many appearances the breed makes in portraits by the great painting masters. A celebrated Renaissance painting by Titian depicts Federico Gonzaga, the duke of Mantua, with a wooly, cream-colored Bichon at his side. Some 250 years after Titian’s time, a Sir Joshua Reynolds portrait known as “Miss Beatrix Lister, Sister of the 1st Lord Ribblesdale” (1765), shows that the Bichon was still sitting in the lap of luxury.

With the advent of the French Revolution in 1789, the Bichon’s days as the pampered pet of the aristocracy rudely came to an end. One by one the breed’s benefactors were trotted off to prison and the guillotine, and their Bichons lost their positions of privilege in townhouses and palaces. Many were turned out into the street to fend for themselves. Street entertainers took in the bright, agile dogs and trained them to turn somersaults, walk on their hind legs, waving both paws in the air, and perform other tricks calculated to coax a coin or two from passersby.

It wasn’t long before the Bichon was earning his keep as a circus performer. Trainable, impossibly cute, and always at their best when in the spotlight, Bichons were excellent candidates for showbiz success.

Pierre-Auguste Renoir’s “The Inn of Mother Anthony” (1866); by Renoir’s time, the Bichon had gone from the lap of the elite to the floor of the inn.

Circuses have always had a preference for white dogs, the gleaming coats making their form and facial expressions easy for customers in the cheap seats to see at a distance. The American Eskimo Dog and the Poodle are other examples of white-coated breeds that have wowed audiences around the world.

Thanks to their crowd-pleasing antics Bichons survived, but in the 20th century they faced hard times because of the shortages and austerities brought on by the two world wars. Once again, many Bichons found themselves out in the cold. Thanks to a few fanciers who gathered Bichons off the streets of France and Belgium, the breed survived and was recognized in France under the auspices of the Societé Centrale Canine in March 1933 as the “Bichon a Poil Frisé”—the Bichon of the curly hair.

In 1956, Helene and Francois Picault of Dieppe, France, arrived in America with six Bichons in tow, hoping to establish the breed in this country. Not long after, they succeeded in producing the first Bichon littler bred in the United States. For some years the breed’s small but dedicated following worked to stabilize important breed traits like size (the Bichon’s U.S. breed standard prefers a dog standing 11.5 inches) and facial expression before the Bichon was ready to take its place as show-ring royalty. In 1964, the Bichon Frise Club of America was founded in San Diego. The AKC accepted the Bichon into the Miscellaneous class in 1971, and full breed recognition in the Non-Sporting Group came in April 1973.Since then, dog-show regulars have seen many Bichons become big winners.

None was more famous than JR, a record-setting Bichon who in 2001 became the AKC/Eukanuba National Championship’s first Best in Show winner. He followed up two months later with a Best in Show at Westminster, becoming the first (and, so far, only) Bichon to take the top prize at that hallowed venue. Judge Dorothy Macdonald called him “as close to perfection as you can get.”

JR’s signature gesture after a big win was a two-pawed salute to the crowd. This was a delightful throwback to his breed’s days as a street performer, when Bichons was worked for their supper instead of show ribbons.

Smiles Are Their Business

The Bichon Frise has had a long journey, sometimes perilous but always fascinating, from royal companion and fashion statement to modern-day pet. Today’s pet owners cite many reasons why the Bichon was well worth preserving over the centuries.

The low-shedding, hypoallergenic coat is a major selling point to owners who don’t mind the daily brushing and routine scissoring required to maintain the coat in all its resplendent glory. The Bichon’s trainability, quickness, and deceptive sturdiness make him a natural for owners looking for a portable partner in obedience and agility training.

Lovers not fighters, Bichons get on well with their fellow mammals. Photo Deb Gibb

They are long-lived dogs, very adaptable, and although endlessly amusing they don’t require a lot of hard exercise. The Bichon tends to get on with other dogs and children. Alert and immensely loyal to their favorite human, Bichons make nice little watchdogs—but they are lovers not fighters, and operate under the assumption that there are no strangers, just friends they haven’t met yet. Their sociability and size make them ideal city dogs.

Finally, there’s the happy-go-lucky Bichon personality that draws smiles and hugs wherever they go. It’s no coincidence that Bichons make ideal therapy dogs. (JR, after his retirement from the show ring, had a second career as a therapy worker with a special knack for sick children.)

We have all known someone described as a “people person.” Well, the Bichon is a “people dog.” And to a Bichon, people are people—whether you’re the king of France, a dog show judge, or the pizza delivery guy, the Bichon wants nothing more than to win your heart.