Meet the Norwegian Buhund—Dog of the Vikings 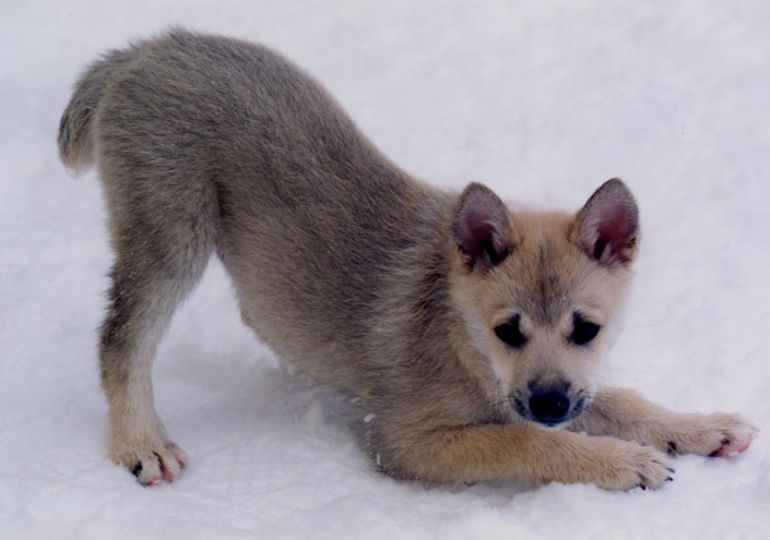 The Norwegian Buhund (Buhund) is a member of the Herding Group and a typical northern breed of the spitz type, with prick ears and a tightly curled tail. Although their exact origin hasn’t been identified, they were known in Scandinavia even before the days of the Vikings. Here are nine interesting facts about this alert, friendly, and lively dog.

1. The “bu” in the name “Buhund” comes from the Norwegian word for homestead, farm, or mountain hut. This is where the shepherd would live in the summer while looking after his herd. The second part of the name, “hund,” means dog.

2. The modern Buhund was developed on the western coast of Norway. The breed’s original function was as an all-purpose farm dog, used for herding cattle and sheep, and as a watchdog. In remote farms in Norway, they can still be found doing those same jobs today.

3. Vikings took Buhunds with them on their travels, both by land and by sea. In Norway, the Gokstad excavation of a Viking grave from around 900 A.D. uncovered the skeletons of six dogs. Those dogs were representatives of today’s Norwegian Buhund.

4. The Buhund has been considered a separate breed since the 1600s, although the first Norwegian Buhund show wasn’t held until 1920 in Jaeren, Norway. The Norsk Buhund Club was formed in Norway in 1939, and the first dog registered with the club was called Flink.

5. The Buhund’s personality is very affectionate, naturally gentle, and eager to please. Their even and cheery temperament makes them wonderful family pets, as does their desire to do whatever their people are doing. However, they do enjoy using their voices. They have a strong, intense, high-pitched bark, which is useful for carrying through the mountains when they are herding. Be prepared for your Buhund to bark to alert you to any moving object, from people to cars to birds.

6. According to the breed standard, the Buhund comes in two colors. The first is wheaten. This is any shade from pale cream to bright orange, with or without dark-tipped hairs. A black mask is acceptable with this color. The other color is black, without too much bronzing. For both colors, there should be as little white as possible.

7. The medium-to-short, easy-to-care-for coat has a smooth-lying thick and hard outer coat and a soft, wool-like, dense undercoat. The coat is longer on the neck, chest, and back of the thighs and comparatively short on the head and the front of the legs. The undercoat is shed once or twice a year, but year-round shedding is minimal. The coat doesn’t tangle when it sheds, so regular brushing should be enough to keep your Buhund looking tidy.

8. This is an exceptionally intelligent dog, with a lot of strength and stamina, so training should be started as soon as possible. They are easy to train, but are also sensitive, easily bored, and tend to think independently. Consider positive training techniques like clicker training and food luring to ensure success.

9. The Norwegian Buhund is a very high-energy dog that loves to have a job to do. Currently, they are being used as hearing assistance dogs. They were bred to work for hours at a time and have a playful personality, so they require a lot of physical exercise. Taking them for a run, playing fetch, or taking long hikes are great ways to tire them out. Dog sports are another way to put them to work. Excellent choices include obedience trials, rally, and agility.