The Maltese, Toy Dog of Myth and Legend 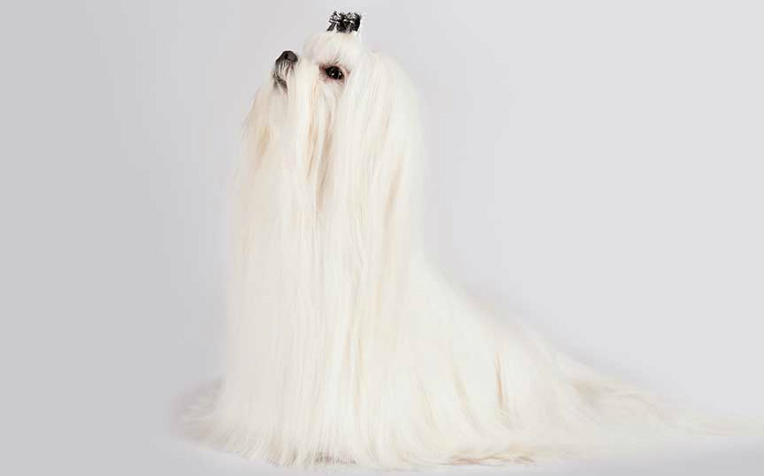 The Maltese, legendary “Comforter Dog” of dainty build and regal bearing, has seen the fall of Rome, the Dark Ages, and the conquests of Napoleon, and not only survives—it thrives.

Dogs in the Mist

A Maltese sails around a show ring—any show ring, any weekend—silky coat flowing, topknots bristling, coal-black eyes shining with enough personality for 10 ordinary dogs. At ringside, even the greenest novice can appreciate the dog’s dramatic air and effortless gliding gait; the old-timers exchange a look that acknowledges the little aristocrat’s essential dogginess.

For despite its exotic furnishings, this tiny visitor from the dawn of history is all dog: hearty, resourceful, adaptable. Many breeds that rivaled the Maltese in its formative years—bigger, fiercer animals—have been extinct since the Bible was a work in progress. It takes a whole lot of dog to win the hearts of three millennia.

It is customary at this point in a Maltese story to insert the phrase “The breed’s beginnings are shrouded in the mists of history.” It is invoked here as a nod to tradition, and because the dog-eared disclaimer is as true today as it was for the first historian who searched vainly in the mist for Maltese origins.

“Ye Ancient Dogge of Malta” is older than history itself, a living artifact from a time when a civilization was defined by its myths, and when praying to a golden idol of a dog wouldn’t raise an eyebrow. Not surprisingly, Maltese origin stories vary.

The rocky shores of Malta lie 60 miles due south of Sicily. Today, the 122-square-mile island republic is a charming postcard op for tourists on “If it’s Tuesday, this must be Malta” jaunts through Europe. But in ancient times, Malta was the literal center of the civilized world. Smack in the middle of the Mediterranean Sea, it was a crossroads for pilgrims, mariners, and wealthy merchants from three continents. As far back as 3500 b.c. Malta was a thriving seaport and a seat of finance and culture, a Bronze Age New York with ox carts instead of subways.

During a 2,000-year period beginning in 1500 b.c. this strategic gateway was conquered and occupied by successive waves of seafaring empire-builders—Phoenicians, Greeks, Carthaginians, Romans, Arabs, and Normans—for whom the island was a clearinghouse for precious commodities, such as spices, silks, gemstones, and a certain toy dog favored by leisured ladies the world over. It is likely that the little white lapdog was introduced to Malta by the Phoenicians, who ruled the Mediterranean before the rise of Greece. Historians have constructed lively theories setting the Maltese’s birthplace everywhere from Egypt to the Alps. Maltese scholarship regularly cites terriers, spaniels, or even spitzes as antecedents, but many fanciers insist that the Maltese is indigenous to Malta, is its own type, and is a contributor to other canine varieties.

The mist is burned away by the brilliance of Greek culture in the fourth and fifth centuries b.c. Hellenic artists and writers were fascinated by the Maltese’s geometric beauty and left behind a rich legacy of breed-specific treasures: The “Melitaie Dog” is depicted on Golden Age ceramics, and Aristotle refers to it as “perfectly proportioned,” notwithstanding a diminutive stature.

Roman aristocrats perfected the Maltese’s role of status symbol and fashion statement. In the years leading up to the Christian Era, a noblewoman wasn’t fully dressed without a “Roman Ladies’ Dog” peeking out of her sleeve or bosom.

“Portrait of a Lady with a Lap-dog,”
Lorenzo Costa, c. 1500, oil on panel,
Royal Collection, Windsor

Maltese-mania swept the empire; even the crusty Emperor Claudius succumbed to the breed’s spicy charm.

Arguably the world’s first “fad dog,” the Maltese was a persistent motif in Roman culture, most notably in the myths, poems, and fables in which the breed symbolized loyalty. (It is not a stretch to imagine that the first dog ever to be named Fido, the Latin word for “trust,” was a Maltese of imperial Rome.)

Of the many Roman legends connected with the breed, perhaps the most enduring concerns Saint Paul, the peripatetic apostle of early Christianity. The Acts of the Apostles recounts Paul’s shipwreck on Malta, where he miraculously healed the father of the island’s Roman governor, Publius. The grateful Publius, so the story goes, presented Paul with a Maltese.

The collapse of the Roman Empire in the fifth century brought on 600 years that were described by author William Manchester as a “melange of incessant warfare, corruption, lawlessness, obsession with strange myths, and an almost impenetrable mindlessness.” Life was cheap in the Dark Ages. Plague, famine, and ignorance decimated humans and animals, and vast forests patrolled by wolves and outlaws overtook the sparsely populated European continent.

Thanks to its citizen-of-the-world status, the Maltese floated above the wreckage of Western civilization. Bartered in the Far East since the days of the Phoenicians, the breed had taken root in China, where it was immune to Western upheavals. Asian breeders not only kept the breed alive, they refined it with judicious crosses to, among other Eastern breeds, the Tibetan Terrier. By the time Europe emerged from the Dark Ages, a new and improved Maltese was ready to reclaim its rightful place in the lap of Western nobility.

We might think of the Renaissance as a rediscovery of classical art and philosophy, but it was also a time of rebirth for utilitarian sciences—agriculture, shipbuilding, animal husbandry. The ancient pastime of dog breeding was revived, as was the notion of owning an animal simply for pleasure, though pampered Maltese had practical applications: They were used as hot-water bottles, extracting pain from delicate stomachs, thus earning the nickname “Comforter Dog”; and keeping a Maltese in your bed to draw away the fleas was the cutting edge of medieval personal hygiene.

Life at court wasn’t all velvet pillows. Machiavellian intrigues could turn a careless queen into a headless corpse overnight. Mary Queen of Scots, according to legend, was beheaded in 1587 with a Maltese beneath her petticoats. The dog survived the ordeal but died of a broken heart soon after. In another place and time—post-Revolution Paris, 1793—the grieving Maltese of Marie Antoinette jumped to his death from the Saint Michele Bridge as his mistress was led to the guillotine.

If both stories are not quite true, they certainly convey an essential truth: This little dog will love you to death.

Today’s Maltese, weighing no more than 7 pounds (4 to 6 pounds preferred), is a bit smaller and more elegant than the “Maltese Lion Dog” first registered by the American Kennel Club in 1888. But in most ways, it’s the same little dog that decorated the laps of Roman matrons. To appreciate just how consistent Maltese type has been, listen to breeder Sarah Lawrence’s description of her breed’s symmetrical lines—“The point of the withers to the base of the tail should be exactly equal to the point of the withers to the ground”—and then recall Aristotle’s “perfectly proportioned” dog of 23 centuries ago.

To round out its résumé as an ideal companion, the Maltese is known as a magnificent watchdog. As Lawrence puts it, “The Maltese does not know it is a little dog. No one ever told them that. They think they’re Great Danes!” Longtime breeder-exhibitor Annette Feldblum told the AKC Gazette that the dog “definitely has a Napoleon complex.”

Which brings to mind another Maltese legend. In 1798, Napoleon conquered Malta. It is said that one of his first acts as military governor was to select the finest Maltese dog on the island as a gift for his beloved Josephine. Whether or not the feisty little general recognized himself in the feisty little dog is, like so much about this ancient breed, shrouded in the mists of history.

Learn all about the breed from the experts at the American Maltese Association.