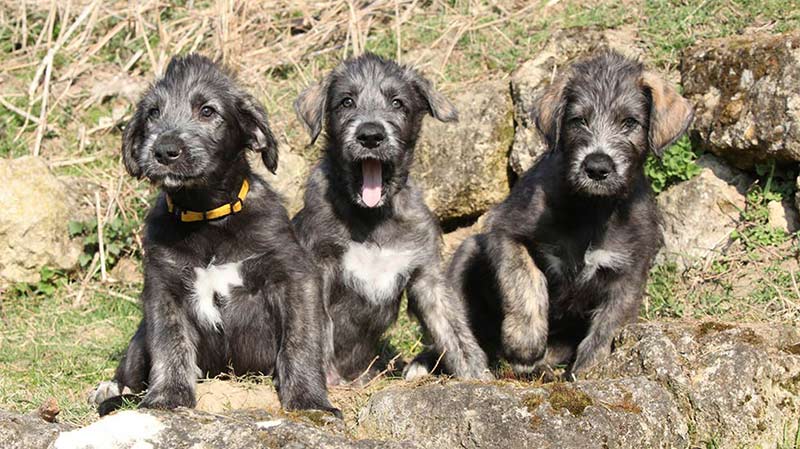 Are you considering getting an Irish Wolfhound puppy?

If so, it’s certainly understandable. These sweet-tempered creatures have beguiled us since ancient times. Originally bred as fearless big-game hunters capable of dispatching a wolf in single combat, Wolfhounds today are the most serene and agreeable of companions for owners of all ages.

But, with big dogs come big responsibilities. To help you in your decision-making, we consider here some of the unique challenges of raising giant-breed puppies.

With giant-breed pups, socializing is crucial to proper upbringing.

There is no official AKC height or weight requirement for what constitutes a “giant breed,” but such dogs are certainly easy to spot. In this unofficial classification is the Wolfhound’s fellow Hound Group member the Scottish Deerhound, along with such massive Working Group breeds as the Black Russian Terrier, Great Dane, Mastiff, Newfoundland, and Saint Bernard. There are several other giant breeds in the AKC and other registries around the world—but the Irish Wolfhound is acknowledged as the world’s tallest dog breed.

Measured from the withers (the top of the shoulder) to the ground, the average male stands 34 or 35 inches. When on his hind legs, he will stand higher than all but the tallest humans. And at anywhere from 140 to 180 pounds, male Wolfhounds will often outweigh their owners. Females will run smaller, somewhere between 115 and 140 pounds. That, of course, is still a whole bunch of dog.

With these titanic dimensions come special considerations over and above those confronted by owners of small or medium-sized dogs.

This little guy will grow to be about the size of an NFL wide receiver.

It is said that at birth it’s almost impossible to tell an Irish Wolfhound from his countryman the Glen of Imaal Terrier (approximately 35 pounds when full grown). Before long, though, the size difference between the majestic giant and the bandy-legged terrier will become apparent. At six months old, a male Irish Wolfhound might tip the scales at about 100 pounds.

The Wolfhound is a slow-maturing breed whose growth period can last for two years. (Considering the breed’s short life expectancy, something between six and eight years, they spend a good portion of their life growing.)

“They are huge puppies, and they stay puppies for a long time,” Joel Samaha, an AKC judge of the breed, told the AKC Gazette. Like all puppies, the Wolfhound will go through a teething stage—but “teething” for a puppy the size of a full-grown Labrador Retriever can take on monumental proportions. “We had a beautiful old apple tree,” Samaha says, “and one of my hounds stripped the bark off of it, and the tree died. I would tell people, this is what a 4-month-old puppy did.”

No matter how large the puppy is, it’s still a puppy. The bones and joints are still developing. Breeders have long debated how much exercise a growing Wolfhound’s skeleton can endure. Some advocate allowing a young Wolfhound just short spurts of running and romping. Others, like Zena Thorn-Andrews, who for years was among the United Kingdom’s top Wolfhound breeders, says the breed requires exercise from early puppyhood. “I … exercise my dogs right from 8 weeks old. My Wolfhounds have always been out. They’re not caged. And all this business about not exercising them until they’re six months old is just rubbish because by then, they’re totally wrecked.”

Perhaps the last word in the debate is the commonsense middle course outlined by Mel Mercer, DVM, in a Fall 2014 Harp & Hound magazine article:

“I tend to agree with the experienced breeders who allow their pups free play in areas large enough to allow galloping at will with pups their own age. I do not, however, recommend long or coaxed leashed walks, roadwork behind a bike, or excessive motivation to prolonged play, as in situations where ‘fence fighting’ is possible.

“Pups should be prevented from running with adult IWs or with puppies of smaller breeds who may be much more coordinated than the IWs at the same age, except in very limited and supervised situations. Jogging distances with a human should not occur until after the last growth plates of the skeleton close at 13 to 14 months.”

All agree that allowing children to ride Wolfhounds like ponies or having them pull heavy carts or sleds, tasks the breed was not built to perform, can be harmful to Wolfhounds of any age, but especially pups.

1960: The quizzical pup hanging with his grownup buddy grew up to be the great show dog Ch. Hillaway’s Padraic of Eagle.

A male Wolfhound pup will rapidly grow from a squirming gray fluff-ball to a pet roughly the size of an NFL wide receiver. And when it comes to expenses and living space, it really is like opening your household to another full-grown human. The food bill alone can be daunting; a growing pup will eat several meals daily.

“On average, the IW is a fairly expensive dog to properly maintain,” say the experts at the Irish Wolfhound Club of America, whose website is a treasure trove of breed information. “Any medications required (including heartworm preventative) will be two to three times as much in quantity as for the average dog, and the diet should be a quality one (what you think you would save buying cheap kibble you’ll pay over and over again with an unhealthy hound and vet bills). And of course there will be the bigger vehicle, the oversized sofa …”

Also, as giant galloping hounds of great speed and strength, they require a good-size parcel of securely fenced running room to stretch their mighty legs and indulge in their instinct for pursuit. Even picking up after a growing IW can be a challenge. As an old edition of the AKC’s Complete Dog Book so delicately put it, “The hygienic responsibility of owners with giant breeds is awesome.”

Training and socialization (see the e-book on socialization below) are crucial aspects of owning any type of dog, but they are absolutely imperative for giant-breed pups. An unruly 150-pound dog, even one with the friendliest intentions, or one that is suspicious or fearful, can be a menace in the home and around town. Acquiring an Irish Wolfhound pup from a responsible, reputable breeder will ensure that your hound will start off with the proper temperament to take training and socialization.

Happily, a well-bred Wolfhound will train very nicely and will enjoy the attention of the curiosity seekers that such conspicuous dogs inevitably attract in public. A good Wolfhound is as calm and docile as a dog can be. As the noted zoologist Desmond Morris puts it, “It is as though, like a heavyweight champion, it has nothing to prove and leaves yappy belligerence to the minor breeds.”

Hard to believe, but these big guys were once small enough to fit in the palm of your hand:

For more on the breed, see “5 Ways of Looking at a Wolfhound.”