The Many Ways Kids Benefit from Having a Dog 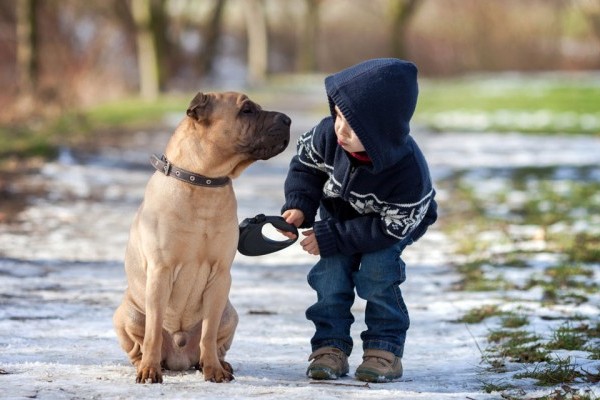 Having a family dog can benefit your child’s emotional intelligence, according to a collection of scientific studies outlined by Nienke Endenburg and Ben Baarda in their paper The Role of Pets in Enhancing Human Well-being: Effects on Child Development, which was reprinted from The Waltham Book of Human-Animal Interactions: Benefits and Responsibilities. Other research shows that pets can have a positive effect on your child's health, too. Here are seven ways kids who have a pet in the home have a leg up on those who don't:

1) They have higher self esteem: When given tasks to complete, such as helping with the care of a pet, kids show an improvement in self esteem. The tasks should be age-appropriate, though, the authors say, such as allowing a 3-year-old who is too young to walk a dog instead put the water bowl down.

2) They’re more compassionate: Multiple studies showed that children who owned pets were more empathetic towards others. “If there are pets in the house, parents and children frequently share in taking care of the pet, which suggests that youngsters learn at an early age how to care for and nurture a dependent animal,” Endenburg and Baarda write.

3) They feel supported: Several researchers found that children often name their pet when asked who they would go to with a problem. “Pets can make people feel unconditionally accepted, whereas fellow humans will judge and may criticize,” the report continues.

4) They have better cognitive skills: Some research has suggested that kids who talk to pets, whether by giving praise and commands or just babbling, show improved cognitive development.

5) They have less stress: Petting a dog has been proven to lower cortisol levels in both the person and the pet. Also, research has found that children’s stress levels decrease when reading aloud to a dog.

6) They're happier: Playing with a pet raises levels of serotonin and dopamine, which calm the mind and increase the mood.

7) They're healthier: Besides the obvious benefits of being more active and getting outside more often when playing with a dog, several studies have suggested that children who have dogs have a decreased chance of developing allergies. A current study is underway to determine if dogs could even have a probiotic-like effect on the human body. Read more about that here.

When selecting a dog for your child, make sure to research the breeds and speak to the breeder about your family’s lifestyle so that you can ensure the pet you get is the best fit for your whole family.

Also, be sure to educate children about dog body language and always supervise their interactions.

More like this:
How Dogs Help Children With Autism
Questions Parents Should Ask When Considering a New Dog