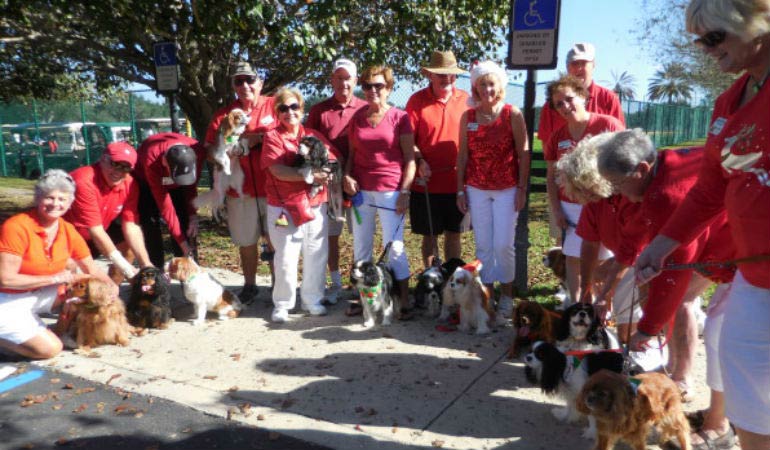 Many people get involved in the dog world because they grew up around conformation, or competed in Juniors, or a family member or friend convinced them to try it out. But ultimately, it doesn't matter how you get involved, everyone is welcome and it's never too late to start. We had the opportunity to speak with Kimberly Foreman of the Cavalier King Charles Spaniel Dog Club of the Villages, who competed for the first time this weekend at the AKC National Championship with her nine-year-old Cavalier King Charles Spaniel.

AKC: What event did you and your dog compete in this weekend?
Foreman: She’s nine-and-a-half-years-old and she was in the Veterans Sweepstakes. She competed against 14-year-old Cavalier King Charles Spaniels and came in second place. It’s kind of hard to beat a lady who’s 100-years-old in dog years the ring!

AKC: And it was your first time showing?
Foreman: It was. I joined this club as a pet owner and I was one of the few pet owners because most of the people in this club are breeders or professional handlers. When we joined as a pet, she was really a tiny petite little Cavalier. She was the runt in the litter and I wasn’t sure if she was going to grow. But I took really good care of her and always stayed with this club.

AKC: How did this club come about?
Foreman: I put out this ad in the recreational news, and said maybe I could start a Cavalier King Charles Spaniel social club and maybe we’ll get 10 people, and we can go to lunch together or something. No, 90 dogs joined. 90 dogs. It’s a new club and it’s a social club. We have veterinarians come and speak, we have all sorts of people come and speak at our club, including breeders. We have fake dog shows, just stuff to have fun.

AKC: So it’s never too late to get involved?
Foreman: No. We have people who have their dogs that are 10 years old that just joined the club, so its really a fun thing. They teach grooming, they teach things people didn’t know, like not to shave your dog because for a Cavalier, you know, they need their coat for winter and summer, both for protection.

AKC: Did you participate in any dog programs before the Veterans Sweepstakes?
Foreman: I started with therapy dogs and I went with Caring Canine Therapy Dogs in Lake County and started her at two-years-old and we worked in the hospitals. She got her THD an then she got her CGC, and then she got an Advanced Community Citizenship, so she has three little titles.

But she's been spayed, so she can't compete [in Conformation], but she could compete in Veterans, and it was my first chance and I thought, “Oh come on, let’s give it a whirl!” It was scary, but I had fun and everyone from the club was there to back us all up. Everyone who entered in the club, we all applauded for everybody. It was really nice.

AKC: Would you encourage other people to get involved?
Foreman: Absolutely, no matter what age it's better for the dog to socialize, and with their own breed, I think it’s nice. It’s a great community.

Interested in becoming more involved in the dog community? Join your local club and find out how you can get started in dog events like Conformation, Agility, or even Therapy Dog training. To learn more about becoming a Therapy Dog, download the free e-book below!