Instead of a “Designer Breed,” Consider the Undoodle: The Otterhound 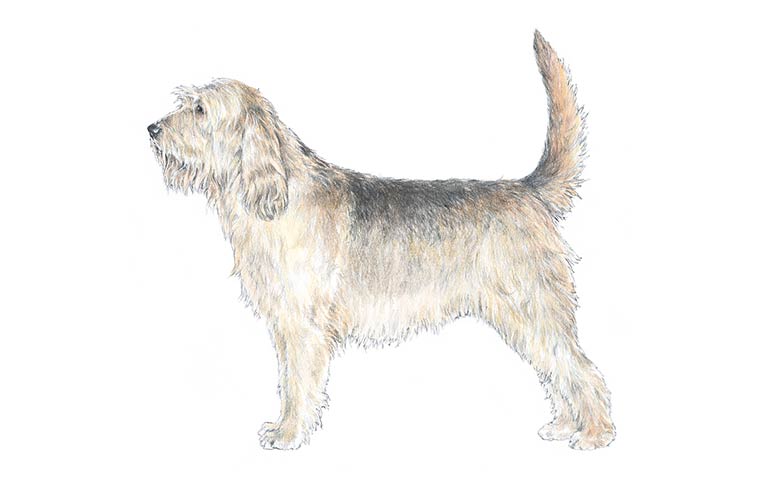 “Is that a labradoodle?”

“A what? I never heard of them. What were they bred to do?”

“Oh. My friend has a labradoodle.”

Probably every Otterhound owner has been part of a conversation like this. “Doodles,” whether “labra–” or “golden–,” are a popular trend, as are a number of other cross-breeds, frequently called “designer breeds.”

At the same time, some of our oldest breeds, like Otterhounds, are fighting for survival.

In fact all dog breeds were “designed” by humans through selective breeding in one way or another, usually to perform certain functions like hunting, herding, or guarding. Each breed’s distinctive appearance resulted from the traits suited to performing its job.

Today’s designer dogs are often bred solely for looks. Take the labradoodles and goldendoodles—who like Otterhounds are large, shaggy dogs with “goofy” expressions that attract owners and passersby.

Unlike doodles, however, Otterhounds have predictable appearance and temperament, including behavior dominated by their keen sense of smell.

“Doodles,” in contrast, though often endearing, can differ widely in appearance and have a variety of coats, from slightly wiry to curly to soft and fluffy. Despite claims that they do not shed, most doodles shed and mat, thanks to one parent, and need to be clipped, thanks to the other. The combination of the Poodle hair that keeps growing and the Lab and/or Golden fur that sheds profusely creates a dog who needs a vacuum and a groomer. They tend to be more substantial than Poodles, though often with many of that breed’s features. Curiously, many of them are larger than either of the breeds behind them, and few of them hunt, unlike the Goldens, Labs, and Poodles in their ancestry.

The Otterhound is an old breed of scent hound, developed with a wiry, waterproof outer coat and a softer undercoat to keep him warm as he patrolled land and water to keep river otters from decimating the fish populations in the British Isles. A good Otterhound coat repels water and dries quickly.

Everything about this scent hound—from his size, to his coat, to his large feet with webbing, to his sickle-tail that can be seen waving in the tall brush—is designed to make him efficient at scenting and pursuing his prey on land and water.

This centuries-old breed doing what they were bred to do. “Two Otterhounds Working at the Base of a Tree,” by Reuben Ward Binks (British, 1880–1950). Courtesy Bonhams.

Persistent and independent, Otterhounds are pack hounds, and they love fellow dogs, cats, and of course people. More than anything, however, they have those amazing noses inherited from their Bloodhound and Welsh Foxhound ancestors, who can scent on land and water.

All their appealing features have a purpose. While no longer used for hunting otters, which are endangered, the hounds still pursue careers in tracking and trailing. And while Otterhounds do shed, they shed less than most dogs, and their hair never needs to be clipped. The breed does not require trips to the groomer’s—just a comb and brush applied once a week.

The “doodle” population is on the rise, despite the often-high purchase price and upkeep cost, while the Otterhound breed is nearly as endangered as the otters they once pursued. With fewer than 1,000 remaining in the world, these clowns with the keen noses and sociable natures may soon go the way of the passenger pigeon. And that would be a loss. They possess most of the traits and looks of the “doodle,” and more—and they breed true. They can hunt, track, and visit folks in nursing homes and hospitals and kids in schools. They make great bed-warmers on winter nights, and they can find your keys and gloves for you. And they need dedicated fans of the breed to ensure that they are not casualties of the newer designer mixes.

Visit the Otterhound Club of America website for breeder referral and in-depth information about the breed.

Eibhlin Glennon has owned Otterhounds since 1986, when she got her first, a rescue named Sam. Her primary interests are in the breed’s working aspects—tracking and trailing. Five of her Otterhounds have been or currently are therapy dogs. She is co-chair of the OHCA’s rescue committee.