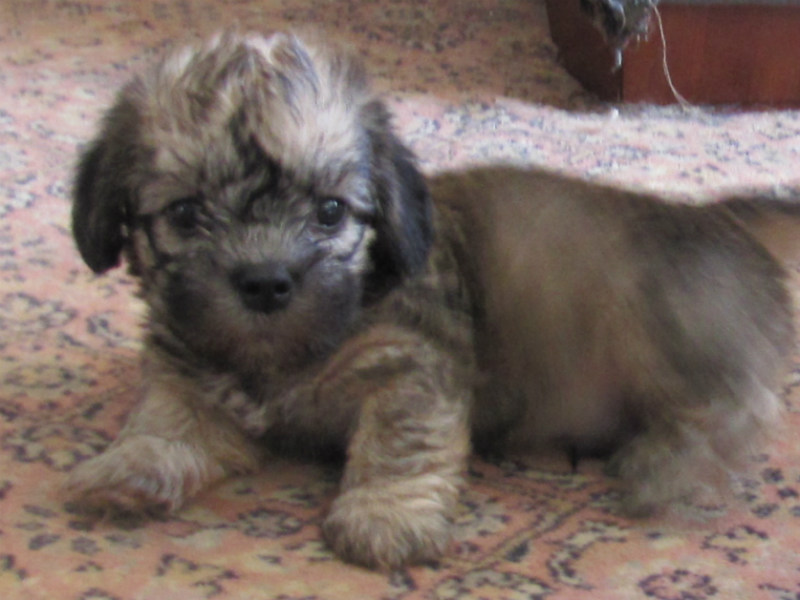 The Dandie Dinmont Terrier is renowned for his unique appearance as well as his literary connection. This long-bodied, low-to-the-ground dog is a member of the Terrier Group and while he exhibits some typical terrier qualities, he also has some unique characteristics.

During the late 1600s, the Dandie Dinmont Terrier originated in the border country between Scotland and England. Breeders selected specific representatives of the rough native terrier to create a vermin hunter that would go to ground after otters and badgers. Dandie Dimont Terriers were recorded as a distinct breed around 1700, making them one of the oldest terrier breeds.

However, the Dandie Dinmont existed for more than 100 years before earning his distinguished name. Sir Walter Scott made these dogs famous in his novel Guy Mannering, which was published in 1815. Sir Scott owned several of the terriers and was so taken with their personality that he wrote them into his book. One of the book’s characters, a farmer named Dandie Dinmont, owned six of the dogs, and thanks to Sir Scott’s depiction, the breed became known as the Dandie Dinmont Terrier.

One of the characteristics that so enamored Sir Walter Scott is the fearlessness of the Dandie. According to Sir Scott, “they fear naething that ever cam’ wi’ a hairy skin on ‘t.” This, coupled with its loud and surprisingly low-pitched bark, makes the Dandie a valuable watchdog.

There are no straight lines on the Dandie. His long back curves up over his loins, and his head is large and domed. Even his tail is curved like a sickle, being described in the breed standard as a “scimitar,” a type of curved sword. The Dandie Dinmont is a relatively short dog, standing 8–11 inches at the top of the shoulder and weighing between 18–24 pounds.

Dandies come in two colors. They can be pepper, which ranges from dark bluish-black to light silvery grey, or mustard, which varies from reddish-brown to pale fawn. The hair on the body is crisp, but the hair on the head, which grows in a characteristic full topknot, is much softer. The silkier the topknot, the better.

A Dandie’s coat is non-shedding, so they may be suitable for people with allergies. Unlike other breeds with continuously growing hair, like the Poodle, the Dandie’s coat has a set length, about two inches long. They don’t need to be clipped at the groomer, and in fact, shaving or clipping will ruin the coat. Instead, twice a year, the Dandie’s coat needs to be stripped (the dead hair removed). A thorough brushing and combing should also be done at least every other day.

Dandies are affectionate with their owners. They are patient and love to play with children, so are well suited to being family dogs. A good cuddle with their humans is right up their alley. Expect your Dandie to follow you around the house, although they are quiet household pets. They save their energy for walks and playtime.

Like many terriers, Dandie Dinmonts are independent, strong-minded, and smart. This can add up to some training challenges. They learn new behaviors quickly, but might not always do as you ask as soon as you ask. Be patient with your Dandie and train him using positive methods that emphasize motivation, so he will want to make you happy. They are able to adapt to any lifestyle, from a country life to apartment living, and will be happiest with a daily, brisk walk.

Learn more about the Dandie Dinmont Terrier in the video below.