Wasabi at the beach

Wasabi at the Hollywood Walk of Fame

Wasabi with his favorite kids

Wasabi with the King's mascot, Bailey 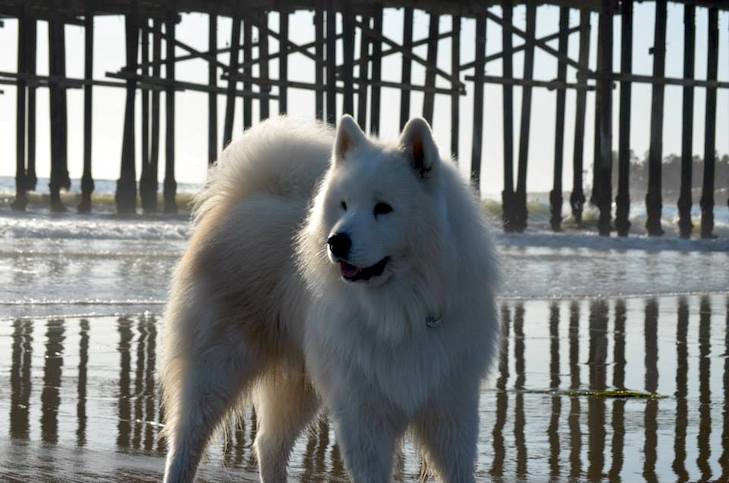 /
Wasabi at the beach 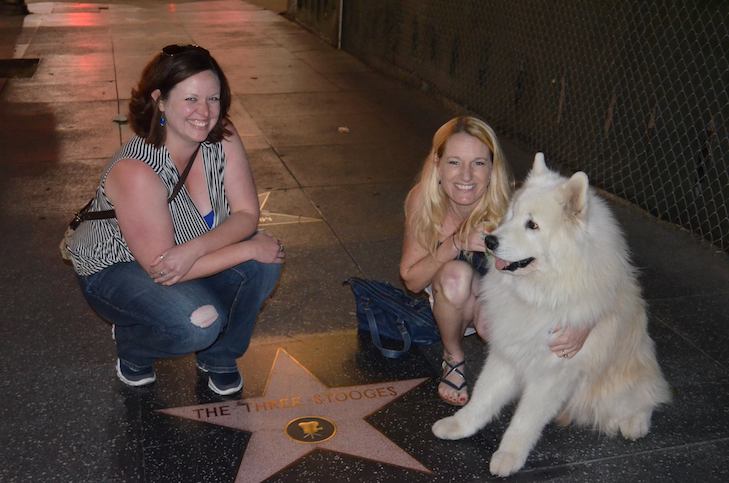 /
Wasabi at the Hollywood Walk of Fame 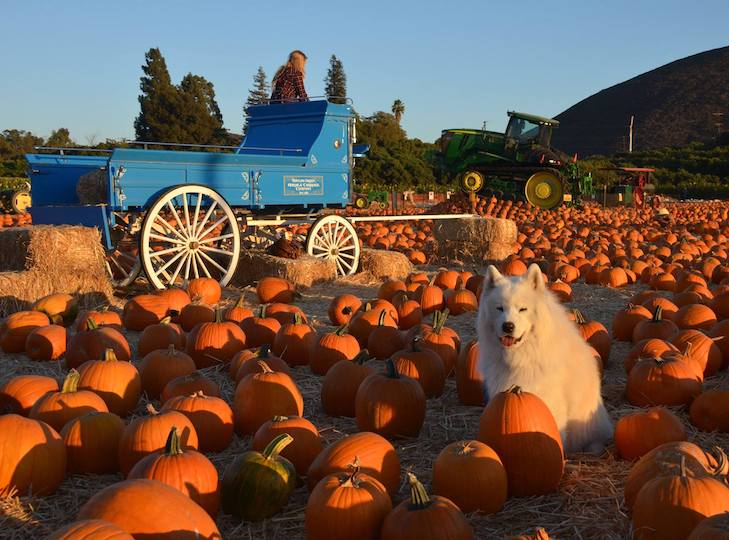 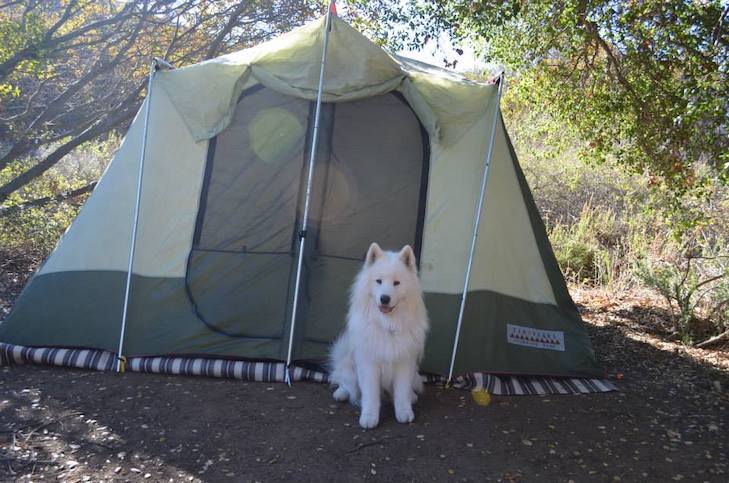 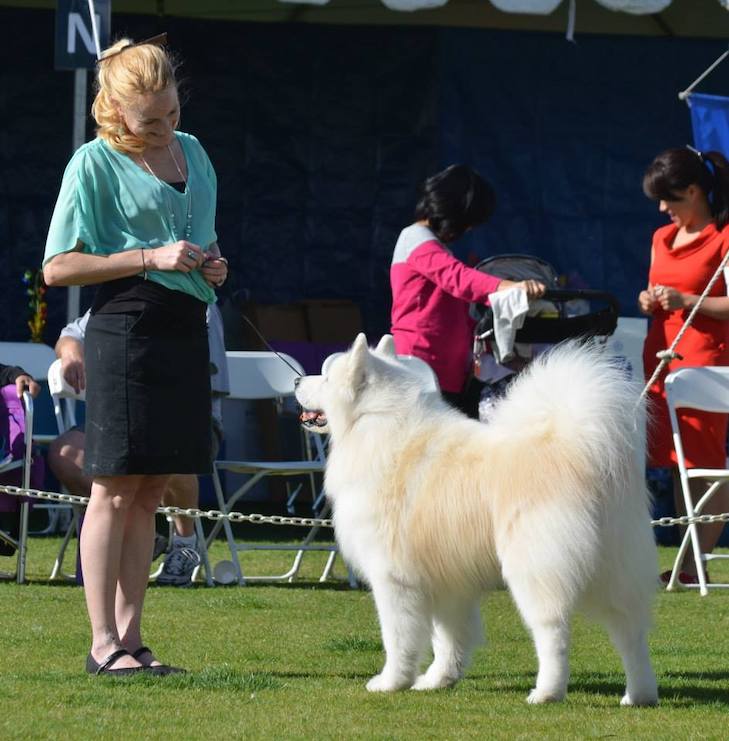 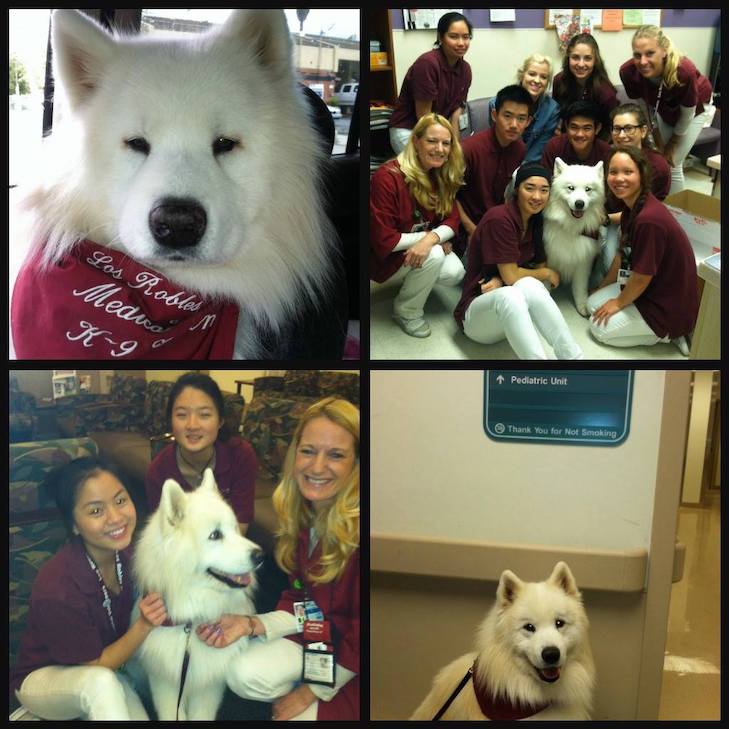 /
Wasabi with his favorite kids 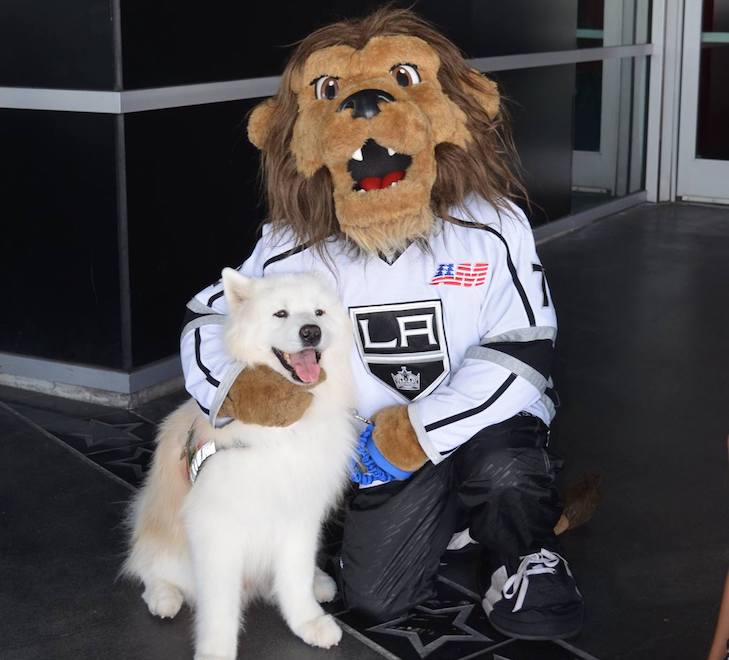 /
Wasabi with the King's mascot, Bailey

What’s that? A few white hairs in your dog’s muzzle? Come to think of it, your BCF (Best Canine Friend) catches more zzz’s than usual, and unlike the puppy years, doesn’t fly into a frenzy every time the doorbell rings.

Your senior dog is slowing down. Now might be a good time to make a bucket list of all the things you wanted to do with your dog but kept putting them off.

On a Friday in 2013, that’s precisely what Heather Stevenson of Thousand Oaks, California, did. After learning Wasabi, her 10-year-old Samoyed, CH. Oakbrook Hot N Spicy, CGC, TDI, WS, TDIA, WSX, THD, was diagnosed with kidney failure, Stevenson cried a lot but vowed to give her dog a grand send-off.

“The veterinarian said Wasabi might not survive the weekend,” Stevenson remembers. “Since Wasabi loved the beach and playing with his ball in the waves, I promised him a trip if he made it to Monday.”

Three days later, when the big white dog rallied, the veterinarian showed Stevenson how to give Wasabi subcutaneous fluids at home. Since kidney disease causes dehydration, the procedure would help him feel better.

“We had a wonderful beach visit, so I decided to make every day—as long as he lasted, as special as he could tolerate,” says Stevenson. “Every day was a gift, and I planned to do as much as I could for my dog.”

For this second-generation Samoyed breeder-owner-handler, every dog is priceless, but Wasabi was Stevenson’s heart dog.

“He loved people, and everyone loved him right back,” she says. “His characteristic breed Sammie smile grabbed everyone.”

“My dog always knew who needed a hug from him and alerted Michael, my ex-husband, to a seizure,” says Stevenson.

After the beach trip, Stevenson didn’t have a list of must-do, must-see, must-have items in mind, but it kicked into gear after a friend and canine holistic practitioner gave Wasabi a Reiki treatment.

When the Japanese healing technique perked up the Sammie, the owner began thinking of other ways to make her dog’s life happier. Food treats raised the bar. What dog doesn’t light up when getting what their owner is eating? For the first time, the Working breed tasted bites of chicken noodle soup, ice cream, tacos, and Cheetos.

“Depending on Wasabi’s demeanor, I planned his activities one day at a time,” says Stevenson, who continued giving the daily intravenous fluids. “I always said, ‘If he makes it until next week, we’ll do this or that.'”

Rather than engaging in over-the-top outings, Wasabi’s bucket list was all about filling the Samoyed’s last days with cheerful experiences.

“Knowing I could lose him at any time, I embraced the time we had together and brought him as much joy as possible.”

No antic was out of the question. The duo did it all, from riding in a golf cart to dancing in the rain and photobombing prom pictures. They went camping and hiking, dined at an outdoor café, strolled along Hollywood Boulevard’s Walk of Stars, and attended a San Fernando Kennel Club meeting with Wasabi wearing an honorary club jacket.

Friends tossed in innovative ways to please the dog, too.

“It was helpful to have so much support, not to mention all the connections,” Stevenson says.

When the LA Kings ice hockey team was named the 2014 National Hockey League (NHL) playoff winner, Wasabi scored his biggest bucket list coup. When friends arranged a photo op for the Sammie alongside the pure silver Stanley Cup championship trophy, the dog was in seventh heaven.

“Although dogs were not welcome to the private viewing, Wasabi’s story won them over,” says Stevenson.

The Samoyed was no hockey fan, and the trophy wasn’t a toy he could play with, but the dog loved everyone fawning over him.

“He never acted ill, mostly because Sammies are stoic and never let on that something is wrong until it’s too late,” says Stevenson.

But on December 2, 2014, 11-year-old Wasabi’s bucket list was filled. A year later, he received a posthumous nomination for the AKC Humane Fund’s Award for Canine Excellence.

Although few dogs can score a bucket list photo with the Stanley Cup, consider enjoying some small and big adventures with your senior canine while there’s still time. Here are some tips:

Whatever you choose to do with your senior dog, remember to treasure every day for as long as you can.

Related article: How to Know if Your Dog Is in Pain: Signs of Discomfort
https://www.akc.org/wp-admin/admin-ajax.php
Get Your Free AKC eBook