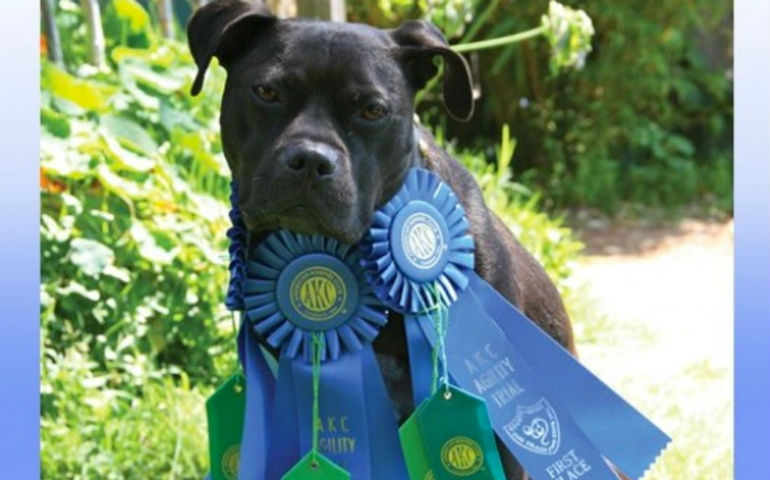 In 2007, football star Michael Vick plead guilty to federal conspiracy charges for running a dogfighting ring out of his “Bad Newz Kennels” in Virginia.

Fifty-one dogs were rescued during a raid, and many were rehabilitated. He served 18 months in jail, and then continued on with this professional life, playing for the Philadelphia Eagles and the New York Jets. And this week, he was signed to the Pittsburgh Steelers.

But instead of focusing on the bad “newz,” we are going to highlight the good that came out of this situation—the comeback of the tortured dogs who showed their unconditional love and resilience in round two of their lives by helping others and even earning AKC titles.

There was Audie (pictured above). After going to a new home with Linda and Bill Chwistek, Audie overcame his fear, lack of socialization, and even, thanks to surgery, physical issues. With Chwistek’s encouragement and training, Audie went on to pass her Canine Good Citizen (CGC) test and by 2012 had earned an advanced agility title and still continues to succeed at the sport today. Read his whole story here.

And Hector. He was only two years old when he was pulled from the fighting ring. But he then went on to live a happy seven years with a couple, Andrew and Clara Yori, in Minnesota, who helped him pass the CGC test and got him a gig as a therapy dog. He visited hospitals and nursing homes, comforting people who needed it most. His story came to an end when he succumbed to erythrophagocytic histolytic sarcoma (read how he had the last word here) in October 2014. Since then, the Yoris established The Hector Fund, where they encourage people to donate $7 in honor of the seven years he had a happy life after being rescued from Vick’s ring. The funds will help other dogs get a second chance as well.

Gracie, a black bow-legged pit bull, was taken in by Sharon Cornett, a member of the board for the Richmond Animal League (RAL). In Gracie’s honor, Cornett and RAL launched Gracie’s Guardians, an animal-welfare organization that serves pit bulls. Read her story here.

There are so many others. Handsome Dan inspired an animal welfare organization and has his own Facebook page. Layla passed her Canine Good Citizen, as did Oscar, and Georgia. Another Vick dog, Leo, became a therapy dog.

Did their owners get a big paycheck like the one Michael Vick gets as he continues to be signed by pro football teams? Nah. But they got something much, much better.