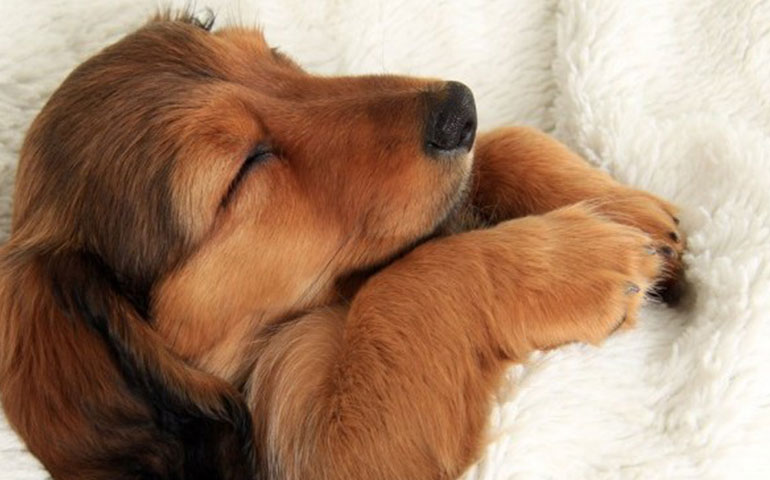 Your dog is fast asleep, when suddenly he starts whimpering, moving his legs or tail, or engaging in some other odd behavior. Could your dog be dreaming?

Scientists think so—in fact, they believe that dogs not only dream as we do, but also that they dream similarly to us, meaning that they replay moments from their day while they’re fast asleep.

How Do We Know Dogs Dream?

“No one knew for certain that animals dreamed the way we do, which can involve replaying events or at least components of events that occurred while we were awake,” said Matthew Wilson of MIT’s Center for Learning and Memory. “We looked at the firing patterns of a collection of individual cells to determine the content of rats’ dreams. We know that they are in fact dreaming and their dreams are connected to actual experiences.”

Because rats are intellectually less complex than dogs and cats, researchers make the assumption dogs and cats dream just as rats do.

How Can We Tell a Dog is Dreaming?

Dogs often bark or twitch their legs during REM sleep, the Sleep Foundation reports. But sometimes, watching a dog dream can be indicative of his breed. “Researchers found that a dreaming Pointer may immediately start searching for game and may even go on point, a sleeping Springer Spaniel may flush an imaginary bird in his dreams,” AKC Family Dog columnist Stanley Coren explained in Psychology Today. Coren also advises that owners who are curious to know if their dogs are dreaming to simply watch them beginning about 10 to 20 minutes after they fall asleep. If you can see their eyes moving behind their eyelids, they’ve begun to dream.

How Often Do Dogs Dream?

When it comes to how often dogs dream, apparently size matters. According to Coren, small dogs, like Chihuahuas, tend to dream more often during one night, with a new dream about every ten minutes, than large dogs. Vetstreet further reports that puppies and senior dogs dream more often than middle-aged dogs.

What To Do If Your Dog is Dreaming?

If you notice your dog having a dream, follow the old adage “let sleeping dogs lie.” Disrupting his sleep during the REM cycle can be startling (think about how you feel waking up from a dream), which can result in an unintended bite or, at the very least, a sleepy dog in the morning.