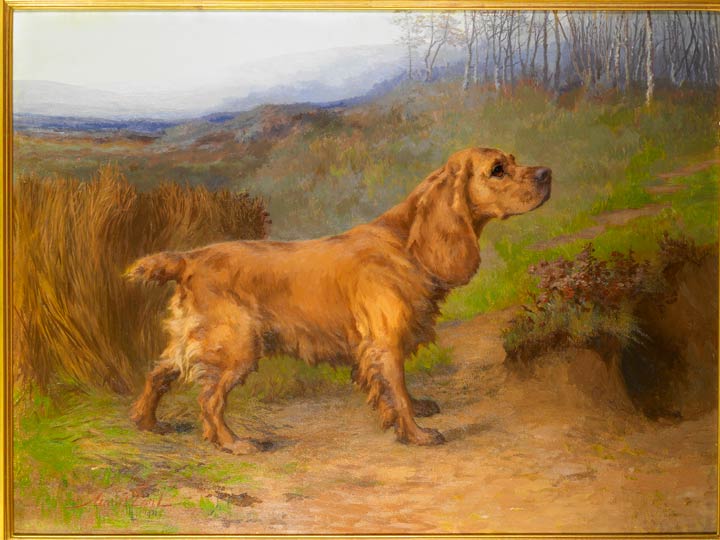 Originally published in the AKC Gazette.

A less flattering description was given in 1647 by the “Witch-Finder General,” whose dubious job it was to rid England of witches, when he stated that one of the witches’ familiars (evil spirit friends) was a fat spaniel, without any legs, named Jermara.

As with the other breeds, the advent of the gun affected the Cocker. Sportsmen needed much time to load and aim, and the merry, active (and impatient) Cocker was a nuisance; a slower, quieter dog was wanted, and the Cocker fell out of favor. It was soon seen mostly around London as a pet rather than a hunting companion. As with most things, this changed, and by the mid-19th century, Cockers were back in favor as working bird dogs. A minimum weight of 14 pounds was established to eliminate the then-popular toy spaniels from competing.

With the advent of shows, the problem of separating the spaniels resurfaced. If a dog was small he would be shown as a Cocker and when he grew bigger he would be shown as a Springer. In the 1870s, all Cockers were classified as Field Spaniels—even Mr. Farrow’s famous dog, Obo, was first shown as a Field Spaniel. By the end of the decade, the rage for black Field Spaniels had taken hold, and classes were now being offered for them. In 1883, a class for Cockers was offered, and Farrow showed Obo as a Cocker. Still, the confusion was not over, as the Cocker classes were open to “Spaniels, Cockers, and other small Fields.” It was 1892 before a class was offered for Cockers only.

From the start of the new century until after World War I, the advance of Cockers in England was consistent, without being sensational. But on the resumption of shows in 1920, registration skyrocketed. Finally, in 1935, Cockers became the most popular breed in England, eclipsing Wire Fox Terriers in annual registrations with the Kennel Club.

Cockers had come to the United States during the latter half of the 19th century, but 1884 marked the arrival of Obo II, a 23-pound son of Farrow's Obo. Obo II was ancestor to Robinhurst Foreglow, the dog that changed the Cocker, creating the more modern dog—up on leg and shorter of back. All of today’s winning Cockers trace back to one or another of Foreglow’s four sons. Just as in England, the popularity of the Cocker exploded during the ’20s and ’30s. A division in type was emerging between what started to be called the English and the new American types. By 1936, there were three separate varieties shown—Black, Parti, and English. Later, a fourth division was added for the ASCOBs.

Canine historian Dorothy Macdonald is a longtime AKC judge. In 2001, she judged Best in Show at the Westminster Kennel Club show. For her article “The Pointing Breeds: Steady and Stylish,” click here.