Can Brain Scans Predict Which Dogs Will Make the Best Service Dogs? 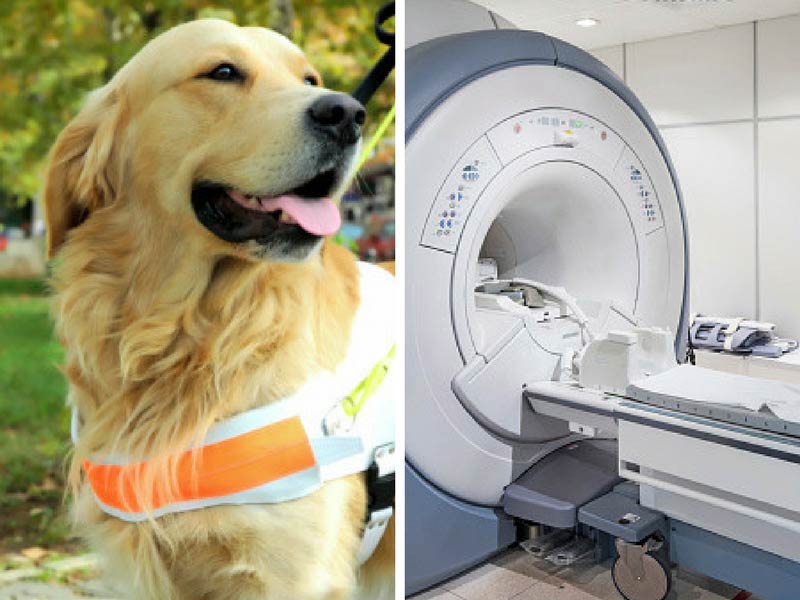 Few dogs are suited to life as a service dog, whether it’s as a guide dog for the visually impaired, a medical alert dog, or a psychiatric service dog. Therefore, service dog organizations need to be very particular about which dogs enter their programs. Despite that, many of the dogs that enter service dog training don’t graduate. And that training is an expensive, demanding, and time-intensive process.

Currently, many service dog organizations use careful breeding programs, specific rearing techniques, and behavior and temperament assessments in choosing their canine candidates. Yet, well over one-half of those dogs end up being considered unsuitable for service. A lot of time, effort, and money could be saved if candidates could be more accurately assessed. Any technique to better predict which dogs will make the cut would be a welcome benefit for service dog organizations. Could brain scans be the answer?

Researchers at Emory University and Dog Star Technologies set out to explore that question in a study recently published in the journal “Scientific Reports.” Researchers had previously observed a contrast between service dogs and non-service dogs in their response to a hand signal that predicted a food reward. They weren’t sure if this indicated a difference in the brains of the dogs or if it was a result of the specialized training service dogs had undergone. If there was an actual difference between the dogs’ brains, then the researchers realized there might be an opportunity to use brain scanning to predict which dogs were the most likely to succeed at service dog training.

Forty-three dogs, mostly Labrador Retriever and Golden Retriever crosses, completed the research study. Canine Companions for Independence, a service dog organization based in Santa Rosa, Calif., provided the dogs. The dogs were trained, using only positive reinforcement, to voluntarily enter an MRI machine for awake brain scanning. Functional MRI technology, the same as that used with humans, measures the activity of neurons in the brain and is totally safe for dogs. The scans were done during the service dog training program. During scanning, the dogs were shown hand signals by handlers and strangers. What the scans showed at this time was then used to predict the dogs likely to pass or fail service dog training, then the study followed the outcome of training to see which of the subjects graduated successfully.

It turns out that the brain scans did allow the researchers to predict the likelihood of a dog succeeding as a service dog. But their accuracy was similar to the other assessments, such as behavior tests, already in use. However, when the scanning results were combined with other data collected, including the sex of the dogs and their behavior during the training program, the researchers’ predictive power increased. The brain scans were particularly useful for identifying dogs likely to fail their service dog training.

So, brain scans theoretically offer a new assessment technique for service dog candidates. But is it a practical tool? An important consideration is the additional cost and time associated with training the candidates to allow MRI scanning. However, it can cost a service dog organization up to $50,000 to successfully breed, raise, train and place a service dog with a human handler. There is a potentially enormous financial reason to identify dogs that are not good candidates. The researchers concluded that the best use of brain scanning might be as an early screening tool, with dogs starting their MRI training at their first birthday and being scanned right before they are scheduled to start service dog training months later.

The future of MRI research holds so much promise. It might be the key to more efficient and effective service dog training. And that might carry over into dogs that work for us in other ways, too, such as police or military dogs. It might even give us an inner look into the canine mind in a way that behavioral observation alone cannot. It’s exciting to imagine what future brain scan research will tell us about what our dogs are thinking and how we can best serve each other.