Just Add Water! 16 Breeds That Are Born to Swim 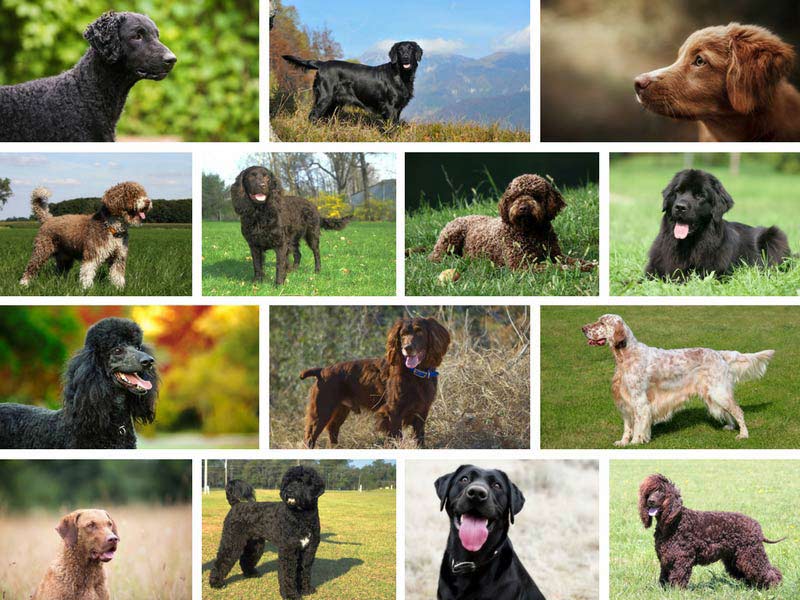 While some dogs will dip a toe in the water and maybe join you in the pool, other breeds are born for the water. These breeds were developed to work in the water, whether for hunting, retrieving, rescue, or as all-around helpers. Even though they’re perfectly happy on land, they’re truly delighted to hit the beach . . . or lake . . . or anything wet. If you’re looking for a canine companion that revels in boating and swimming, one of these is perfect for you.

This charming little Wisconsin-bred water dog is just the right size to hunt from a canoe or a skiff. Combining traits of a retriever and a spaniel, he’s used to working in water, everything from the marshes of the Great Lakes to icy expanses. The breed is pretty rare, but those in in the know love his eagerness and energy.

Although rare in the U.S., the Barbet has been a popular French water dog since at least the 16th century, when Henry IV hunted waterfowl with his Barbet. Friendly, outgoing, and energetic, the Barbet is drawn to water, even muddy swampy tracts. In fact, his nickname is “Mud Dog.”

Those who hunt wild turkey and waterfowl in the swampy and marshy terrain of the American South treasure this medium-size spaniel. He’s a great companion for an active family — lovable, trainable, and eager. And he’ll outlast you in the water, every time.

His name says it all. With his oily waterproof coat, strength and endurance, this rugged gundog was born to work the rough, often icy waters of the Chesapeake Bay. This versatile, energetic breed thrives with active, outdoorsy families.

This English dog is one of the oldest retrieving breeds. Hard working, versatile, and extremely smart, the Curly will retrieve in the iciest water, and he is still a favorite of hunters. Some call him “the thinking man’s retriever.”

For such an amiable, sweet, and gentlemanly dog, the English Setter is also an energetic athlete. Originally bred as a bird dog to point, his happy place is the water. With proper training and encouragement, swimming can be one of his favorite things, along with hanging out with his people, of course.

His beautiful coat is actually quite functional: it protects him from harsh weather and icy water. Originally bred to hunt on land and water, the Flat-Coat is better known today as a happy, energetic, water-loving, and forever-young family companion.

One of the largest and oldest of the spaniel breeds, he has a naturally water-repellent coat, along with intelligence, endurance, and eager attitude. These traits combine to make the Irish Water Spaniel a versatile gundog, especially for waterfowl. He’s also a lovely companion, often called the “clown of the spaniel family.”

One of the most popular breeds in the country, the Lab was bred to retrieve waterfowl, often under difficult conditions. He’s an ideal family and sporting dog and is always, always ready for a swim. In fact, he's an excellent swimmer and will happily spend the day retrieving from the water.

This ancient breed is thought to be the original breed from which all water dogs are descended. Originally used as a gundog to hunt waterfowl, today he’s prized for his ability to hunt for truffles. In fact, he’s the only purebred dog recognized as a specialized truffle searcher. However, he hasn’t lost his natural water dog qualities and is an excellent swimmer.

You might not think of this giant sweetheart of a dog as a water dog, but the breed was developed as a water rescue dog. He has natural lifesaving instincts and, with a large lung capacity, can swim long distances to bring a victim to safety. On land, he’s used for carting or drafting . . . or just being an adored family pet.

This beautiful medium-size dog is the smallest of the retrievers. Intelligent and outgoing, he has the energy to work or play all day long and them some. Tollers were developed to lure waterfowl within gun range and then retrieve the dead or wounded birds from the water. They’d lure ducks with their playful activity along the shoreline, which would attract the ducks’ attention.

Rarer than the Giant Panda, the Otterhound was bred for hunting otter. He’s a big, boisterous dog, humorous, friendly, and affectionate. Fans of the breed call him “the clown of the hound group.” His rough double coat and webbed feet are ideal for the water, and he’s an exceptionally strong swimmer.

This intelligent and athletic dog is truly the fisherman’s friend. In his native country, this web-footed breed was used to “herd” fish into the nets, as well as to swim out and retrieve broken nets and lost equipment. He needs a great deal of exercise and attention and will be even happier if all this takes place in the water.

It’s unusual that a top-notch herding dog is also considered an excellent water dog, but this breed is both. In fact, he’s happiest with a job to do. Although his origins are unclear, we do know that this is an ancient breed used for herding and to hunt on both water and land. Athletic and sturdy, he’s an expert swimmer.

Despite his elegant looks, the Standard Poodle is more than just a runway model. With his athleticism and intelligence, he excels in obedience and other dog activities. In France, he was used as a waterfowl retriever and still enjoys a good swim today.