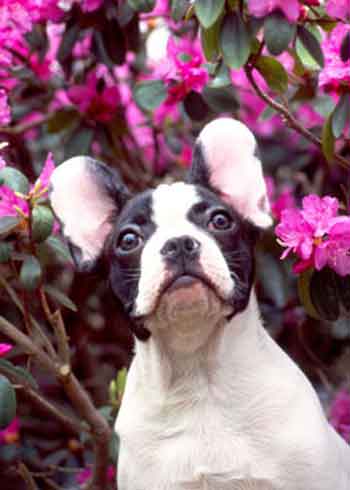 Long before smushface” and “wigglebutt” became the ubiquitous dog monikers, these seven breeds were given nicknames crafted specifically for them.

the Clown Prince of Dogs

At various times devotees of at least a dozen different breeds have claimed this title for their dogs. But to our knowledge only one group of fanciers has incorporated canine clowning into its official identity. The website of the Klun French Bulldog Club of the Free State (South Africa) explains, “The club’s name Klun is the phonetic version of the word clown in French, describing the character of the French Bulldog.”

the D’Artagnan of the Show Ring

The “heedless, reckless pluck” mentioned in the Irish Terrier breed standard reminded some old-time fanciers of the devil-may-care hero of The Three Musketeers. (Other high-spirited Irishmen who wore the name D’Artagnan proudly include Gene Kelly, Gabriel Byrne, and Chris O’Donnell—all actors who played the role in film versions of Dumas’ classic novel.) A more familiar nickname descriptive of the Irish Terrier’s fearless nature is “Daredevil.”

If you have ever seen the Weimaraner’s sleek gray coat and stealthy style of hunting, this nickname needs no explanation. A 1947 Field & Stream article, “The Gray Ghost Arrives,” began America’s continuing fascination with the breed.

His imposing size, intelligence, and versatility have earned the Airedale Terrier the epithet “King of Terriers”—though it’s hard to imagine independent-minded terriers living too long under a king before plotting a revolution.

This inelegant but evocative translation from an African dialect describes the Basenji’s habit of leaping to see above the high grass of the Congo plains. A better-known nickname for this yodeling hound is “The Barkless Dog.”

With archeological evidence dating it to at least 2200 b.c., the Afghan Hound is among our oldest breeds. A popular myth says a pair of Afghans represented the canine race on Noah’s Ark. When the storm-tossed ark began to spring leaks, Noah asked his loyal hounds to plug the holes with their long snouts. This explains (to all but those who insist on facts) why dogs to this day have wet noses.

A nickname for the Bulldog, it alludes to the wrinkly, aggrieved-looking face of the breed. Sourmug has been a popular term of endearment among Bulldoggers for more than a hundred years.