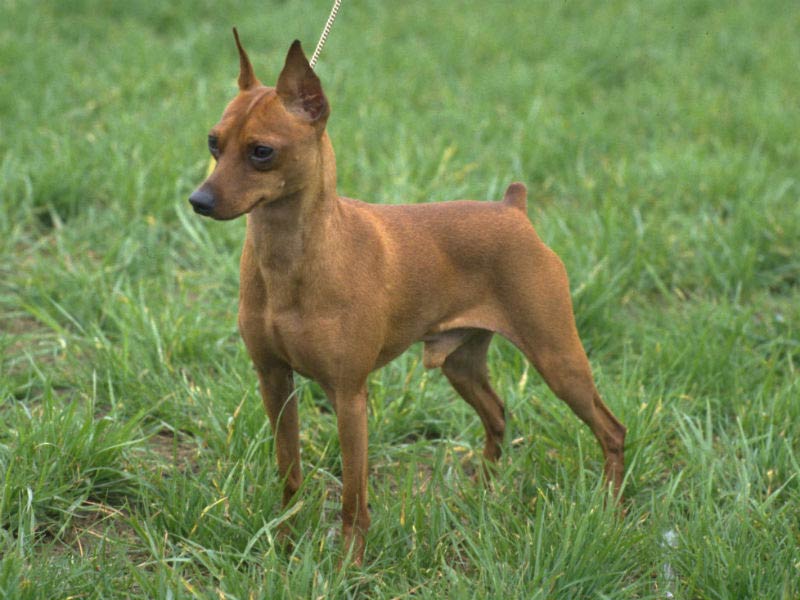 There is a lot to love about Miniature Pinschers, aka the “King of Toys,” aka “Mr. Personality,” and we’ll get to that in a minute. But first let’s clear up a few misconceptions and point out some salient characteristics of the breed.

2. Another breed the Miniature Pinscher is often confused with is the Manchester Terrier. This dog, however, is also a distinct breed from the Min Pin.

3. Until the early 1900s, the Miniature Pinscher was virtually unknown outside of Germany and Scandinavia. It wasn’t until 1925 that the first Min Pin was registered with the AKC. But once here, the breed’s popularity grew steadily.

4. The word “pinscher” may derive from the English word “pinch” or the French “pincer,” which means to pinch or catch. It’s a descriptive term, like “setter” or “retriever,” that describes the way dogs in the pinscher family work. They typically catch their prey by jumping on it and biting fiercely. Other dogs in the pinscher family include the Affenpinscher and the Schnauzer.

5. One of the most distinguishing characteristics of the Min Pin is his gait. If you’ve ever seen one prancing around the room, you’ve seen what’s known as his hackney gait. That high-stepping gait derives from the movement of the Hackney horse, which could trot at high speeds. The Miniature Pinscher Club of America describe the movement like this: “The forelegs and hind legs move parallel with feet turning neither in nor out. The hackney-like action is a high-stepping, reaching, free and easy gait in which the front leg moves straight forward and in front of the body and the foot bends at the wrist. The dog drives smoothly and strongly from the rear.”

6. Now, some things to love about this spirited little dog:
• The Min Pin doesn’t seem to know he’s a small dog; he’s proud, self-possessed, and fearless. This little extrovert has a huge personality. Full of pep and intelligence, he makes an ideal playmate for young and old, alike. He forms a deep bond with his humans and is a great little watchdog.
• He’s also a handsome, naturally clean dog, with a sleek, shiny coat, high-set ears, and expressive dark eyes.
• The Miniature Pinscher is a clever, spirited dog and a bit of a comedian. But he trains well, although it may take some persistence. He keeps his playful personality well into old age, and combined with his devotion, the Min Pin will be your BFF for life.