Celebrate the 4th with 5 State Dogs 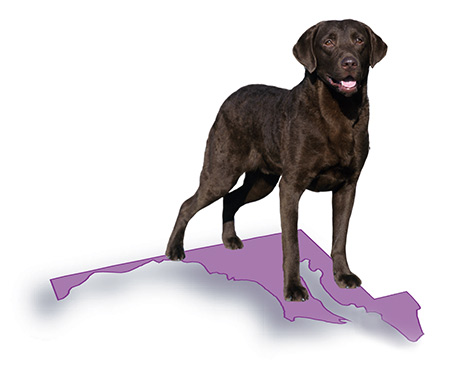 On the day we celebrate all things American, let’s remember that dogs have played a vital role in the formation of our national character. They occupy such a special place in our hearts that some states have designated particular breeds as local treasures. Here are five AKC breeds that are official state dogs.

Backstory: The Chessie had an indefatigable advocate in Elmer M. Jackson Jr., editor of the Annapolis Evening Capital. Jackson wrote extensively about Maryland and knew of the Chessie’s role in the state’s history. He pushed long and hard to get the lush-coated retriever officially recognized. After the governor signed the bill making the Chessie Maryland’s state dog, the legislature issued a special resolution commending the crusading editor for “such service in informing the citizens of our State of Maryland of the history, nature and value of the Chesapeake Bay Retriever as the official Dog of the State of Maryland.”

Backstory: In his bid for recognition the “American Gentleman,” as the Boston Terrier is known, had a tireless advocate in “a feisty Irish lady named Irene Ryan,” as a Boston Terrier publication describes her. In 1978 after the state senate turned down a bid made by fifth-graders from Marlboro, Irene took matters into her own hands. She single-handedly wrote hundreds of letters resulting in the passage of the bill, about 109 years after the breed was created in Boston.

Backstory: The Dane’s claim to fame is its purported connection to William Penn. Pennsylvania muralist Violet Oakley, commissioned to paint a historical scene in the governor’s mansion, chose to depict Penn’s banishment by his father. At the young man’s side is a fawn Great Dane, his “best friend.” Officials in the governor’s office speculate that Oakley may have seen evidence of the family’s association with the Great Dane, since her research was extensive. But neither the state nor the Great Dane Club of Western Pennsylvania, sponsor of the legislation, has unearthed definitive proof.

Backstory: Developed about 70 years ago, the flop-eared Boykin Spaniel counts the Cocker, Springer, and American Water spaniels among its ancestors.

The Boykin’s quest for state-dog status began in 1978, when the legislation was introduced in the state senate. The Boykin Spaniel Society rallied in support. The bill soon cleared the senate and was referred to the House Agriculture Committee, but went no further. In 1984 the topic surfaced again. The society’s second attempt was a success, with Governor Dick Riley proclaiming the opening day of the 1984 mourning dove hunting season to be Boykin Spaniel Day. With a stroke of his pen, Riley made the breed’s position as state dog official the following year.

Backstory: The American Foxhound, whose development was fostered by none other than George Washington, was recognized by the AKC in 1886 and became Virginia’s state dog eight decades later. The club responsible for introducing legislation was the Virginia International Foxhunting Association. AKC judge and American Foxhound fancier Polly Smith recalls that club president Pat Ireland, of Culpepper, was “the moving force behind getting the breed recognized as state dog.”