Toy Spaniels: The Rise and Fall and Rise 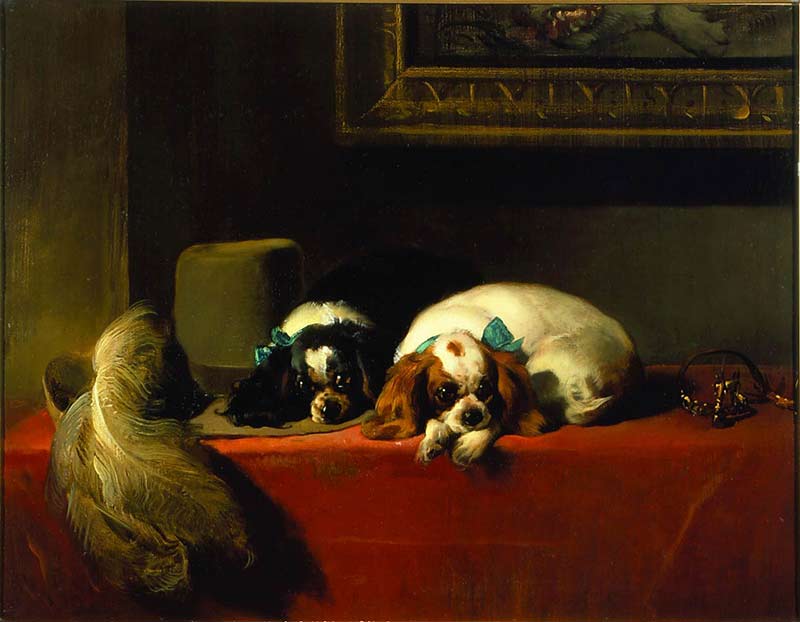 According to an article on Continental Toy Spaniels by Baron Albert Houtart, the spaniel family, regardless of size, belongs to the “braccoid” classification of the canine species, as defined by Pierre Megnin. One distinction that Houtart makes is that all spaniels characteristically have short hair on the skull, muzzle, and fronts of the legs with offsetting fringes on the ears, thighs and back of the legs. In his 1576 “The Dogs of Britain,” John Caius described spaniels as “delicate, neate and pretty kind[s] of dogges.”

It is generally thought that the spaniel was imported from China to Spain and then to the rest of Europe. That there were toy spaniel-type dogs bartered around the Mediterranean during the Greek and Roman eras is well-established and was probably the doing of the ever-traveling Phoenicians. The spaniel was known in England early in the Middle Ages and was mentioned in many writings at the time, including Chaucer’s “Canterbury Tales.”

Certainly, it was the Black and Tan Spaniel that was beloved by both King Charles I and, after the interregnum, by Charles II. This variety was subsequently named the King Charles Spaniel. In his famous diary of years 1659 to 1669, Samuel Pepys wrote that after visiting the King's Council chambers, “All I observed was the silliness of the king playing with his dogs all the while and not minding business.”

With the succession of James II to the throne and his conversion to Catholicism, English nobles invited William of Orange and his wife, Mary, daughter of James II, to come over from Holland and depose the Catholic king. William and Mary were, of course, Protestant. When William and Mary came to England, they brought with them their favorite toy dogs: Pugs. It then became good politics in England to have Protestant Pugs instead of Catholic Toy Spaniels. This phenomenon almost led to the extinction of the Toy Spaniel in England.

The Offshoots: Chin and Paps

When interest in the breed was rekindled close to a century later, the crosses used to bring the breed back produced a far different look, having borrowed much from the Japanese Chin. In her book “Toy Dogs and Their Ancestors,” the Hon. Mrs. Neville Lytton claims that “today’s square-jawed, heavy, noseless type did not appear on the scene until 1840.”

However, in the “Shooting Directory of 1804” the description of one variety, the Blenheim, reads “[A]nother variety of cocker, much smaller, is the Marlborough breed kept by his Grace. They are red and white [with] very round head—blunt noses.” This would seem to make the actual date that English Toy Spaniels as we know them today appeared on the scene a bit vague.

It was as a result of this change that, in 1926, American fancier Roswell Eldridge offered prize money in the amount of 25 pounds for the best Toy Spaniel of the “old type,” as depicted in the artwork of Sir Thomas Gainsborough and others. The reward was collected for the first time in 1928, and from this the original spaniel breed was revived and the Cavalier King Charles Spaniel came into existence. It was definitely not a new breed, but rather the revival of a much-loved breed from past centuries.

Also in the Toy Spaniel family is the Papillon—a descendant of the Continental Toy Spaniel—which was claimed by both Belgium and France and was equally popular in Italy. In fact, so many European aristocrats kept Papillons as lapdogs that they were also known as Royal Toy Spaniels. The breed’s immense popularity led to its frequent depiction by artists, including Sasetta in the 14th century and Titian in the 16th.

By the 17th century, these dogs dominated portraits, many of which were painted with such realism that the philosopher Diderot was known to remark about a Jean-Baptiste Greuze rendering: “If you stare at it for a few minutes, you will hear it bark.” These artists depicted drop-eared dogs, because that is what people preferred at the time.

It was not until the last years of the 19th century, however, that there appeared among these Continental Toy Spaniels a type with erect ears that were carried obliquely, like the spread wings of a butterfly. No known cross is recorded that caused this change from the normal spaniel ear type, although there is some unsubstantiated speculation of a cross to the Chihuahua. Today the breed is judged with both ear types—erect on the Papillon (butterfly) and drop on the Phalene (moth).

The Japanese Chin, which is actually of Chinese origin, is also a descendant of the Toy Spaniel. There is some disagreement as to how the breed got to Japan, whether by direct trade with China or from Korea. The Japanese Chin appears to trace its ancestry to an extinct version of the Pug known as the Loong Chua, or Feathered Pug. Another breed that contributed to the genetic makeup of the Chin is the virtually extinct Happa Dog.

Chin were kept as pets by royalty and were given as gifts to diplomats and foreigners of rank. When Admiral Perry opened the doors of trade to Japan in 1853, he was given a pair which subsequently were given to Queen Victoria. This was definitely not the first appearance of the Chin in Europe, as the breed is closely tied to several of the early spaniels on the Continent and to the revival of the English Toy Spaniel.