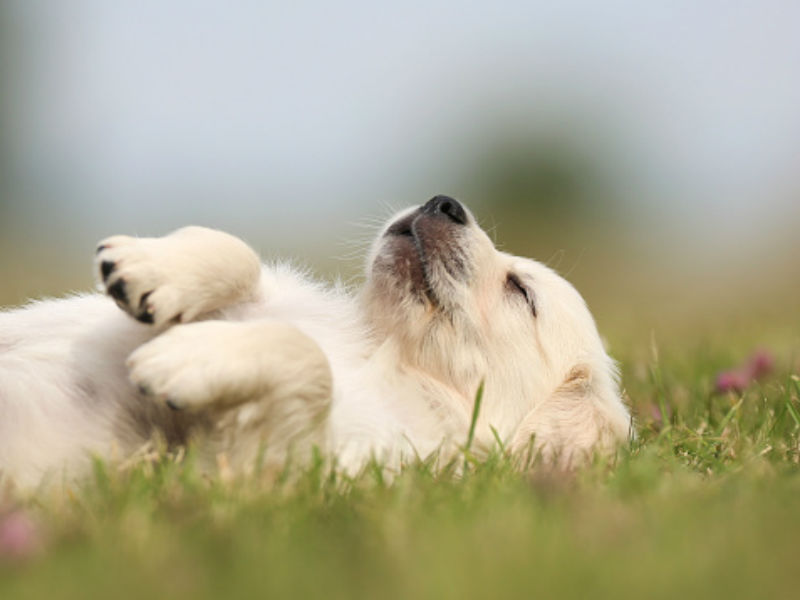 If you've ever had a dog before, you may have witnessed him sound asleep and periodically making twitching movements or even vocalizing little yelping or “crying” noises.

It would be normal for you to wonder if he was experiencing typical behavior, such as a dream, or if your dog was having a seizure.

Seizures are abnormal, uncontrolled motor responses that start from the brain, and that both people and animals can experience. The more common seizures that people recognize are grand mal-type seizures, in which the person or animal has sever thrashing or tremors (a “fit”) over his entire body. Some seizures, however, can be petit mal, in which just a portion of the body experiences a rhythmic, uncontrolled movement, tremor, or behavior (such as fly biting). Most dogs have a seizure while awake or shortly after waking up. Some dogs, however, can have a seizure while asleep. There are many reasons a dog can have a seizure: epilepsy, metabolic disorders, neoplastic growths, etc. This will be up to your veterinarian to diagnose.

Dreaming, on the other hand, is a way the mind processes various memories. We don’t know for sure, but it appears that dogs seem to dream about running, chasing, playing, or protecting. As in humans, dogs have stages of sleep: short-wave sleep (SWS) and rapid eye movement (REM), so it's common to see rapid eye movement in dogs when they dream.

What is the difference between a seizing dog and a dreaming dog?

All dogs dream, and some manifest dreaming with twitching, paddling, or kicks of their legs. These movements are often brief (lasting less than 30 seconds) and intermittent. Seizing dogs’ limbs, on the other hand, tend to be rigid and stiffer, with more violent movement.

Though we mention that dreaming dogs can easily be woken, it is best not to do so, and especially not to touch a dog when he is dreaming, as it may startle him, and he could possibly bite or scratch involuntarily. The old saying: “let sleeping dogs lie” was said for good reason!

If you feel the need to wake a sleeping dog because you are concerned by his movements, it is better to call his name loudly or make a noise, such as dropping an object on the floor, and see if he responds. If he wakens, he was probably dreaming, and then you can gently reassure him if he is startled.

If your dog is having a seizure, stay calm and do not try to prevent him from swallowing his tongue, as this is a myth. Instead, try to protect him from falling or hurting himself. When he is coming out of a seizure, even though you may have felt panicked, try to be calm and reassure your dog, as he has no idea what just happened. If possible, try to time the length of the seizure. If your dog seizes more than 3-4 minutes continuously, prevent him from overheating by gently cooling him with cool wet towels on the head, neck, and groin.

Also, if your dog experiences a seizure and comes out of it, but has another seizure within 24 hours (or multiple seizures), these are called cluster seizures. All seizures should be reason to contact a veterinarian right away, but cluster seizures require emergency action.

Last, if you are unsure whether your dog is having a dream or a seizure, you should videotape the event on your smartphone and email it to your veterinarian.