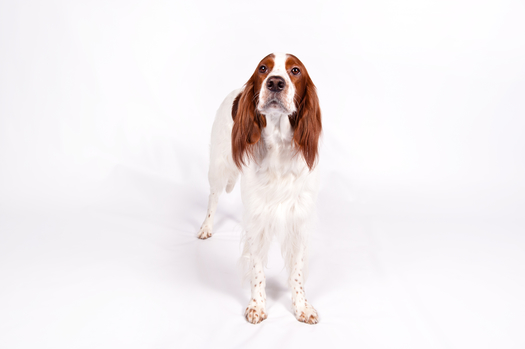 While going through boxes of dog-related material one day, I came across some interesting facts about porcupines. I live in a small country town nestled in an area consisting of mostly woods, streams, stone walls, and rock formations, where an all-too-curious Red and White might possibly encounter this prickly creature.

Since two of my Red and Whites, Luke and Hunter, recently found themselves in very “sticky” situations, I thought some of the porcupine knowledge I’ve acquired might just come in handy for fellow dog owners.

This elusive animal would prefer to keep his quills and remain hidden in a stone wall or up a tree. However, as many of us hunt with our dogs or take them for runs in the woods, there’s a good chance they might come in contact with this little fellow. As the breed is known for a strong prey drive, they are at risk of getting a noseful of quills—or worse.

The quills can cause serious harm, but for the most part a trip to the veterinarian’s office makes them easy to deal with.

There are a number of misconceptions about porcupines and their quills, as well as many interesting facts.

Myth #1: A porcupine can throw or shoot his quills from a distance.

Not so. If your dog gets a snoot full of quills, it’s his own fault, as he would have had to come in direct contact with the “porky” somehow. A dog can also get quills in his mouth from biting the animal. When confronted, the porky will always turn around, showing his tail or back, which is his defensive mode.

Myth #2: The quills have a hook or barb at the end that makes them impossible to pull out.

Not exactly. The quills are part of the porcupine’s body and are a modification of its hair, and each quill has tiny bumps on the surface. These tend to hold the quill in an attacker’s skin. As the dog’s tissue swells where it has been pierced, the quill becomes harder and harder to dislodge.

Myth #3: If you cut off the end of the quill, thus relieving the “vacuum,” the quill will pull out easier.

Not so. Cutting off the end of the quill won’t make those tiny bumps go away.

I have found that pulling quills out is fairly simple. Using a pair of pliers, get a good grip and pull. However, this hurts the dog. I have been successful in removing quills from a couple of my dogs in cases where there were only a few in the muzzle and nose. However, with my others, it was literally impossible, and they needed a trip to the vet’s office. Once they were sedated, the removal was painless, and they were no worse for the wear.

Myth #4: Once having had such an unpleasant episode, a dog will be careful not to go after another bag of quills.

From personal experience, I have learned that once a dog aggressively encounters a porcupine, he will most likely do it again.

If you live in or have your dog in an area were there might be a porcupine population, don’t be overly concerned, as there is only a slim chance of his encountering this prickly creature. If your dog should get a nose full of quills, however, you can try pulling them out—that is, if you are lucky and your dog cooperates. Otherwise, go to a local vet, and he will easily take care of the problem.

Postscript: I have since taken Luke and Hunter to the woods without getting themselves into another “sticky situation.” What good boys they are!