In Japan, there are Inu (dogs) and there are Chin. To the Japa­nese. the distinction needs no clarification: Chin are royalty. They are descendants of dogs that warmed the laps of Chinese aristocracy and kept court with the women of the Imperial Palace.

The Japanese Chin‘s true origin is in China, where the breed’s chronol­ogy dates bad to at least the Fourth Century. Records from monasteries, historic artifacts, and temple paintings indicate an ances­tral relationship between the Chin, the Pekingese, the Shih Tzu. the Lhasa Apso, and the Tibetan Spaniel, all of which were honored for their symbolic religious ties to the Buddhist “lion dog.”

Ancestors of the Chin were gifts to Japanese nobility by the Emperors of China, and were thus held in high esteem, so much so that they were cared for with an “exaggerated sense of reverence.” Chin were pampered, fed delicacies, warmed in silk-pillowed beds, and, in hot weather, hand-fed ice to keep them cool. Servants were given strict in­structions not to disturb a sleeping Chin, and anyone unlucky enough to tread upon a tail or paw had to answer to the severity of imperial law.

Mere peasants were not allowed to own Chin, and the tiny dogs became more valuable than gold.

The Japanese refined the Chin with a particular emphasis on size—the smaller the better. Pup­pies were given Saki to stunt their growth. Adult Chin weighing less than three pounds were highly prized, as these diminutive dogs could be carried under the sleeves of the kimono or in small baskets. Kept in virtual seclusion, Chin were rarely brought in sight of western eyes. 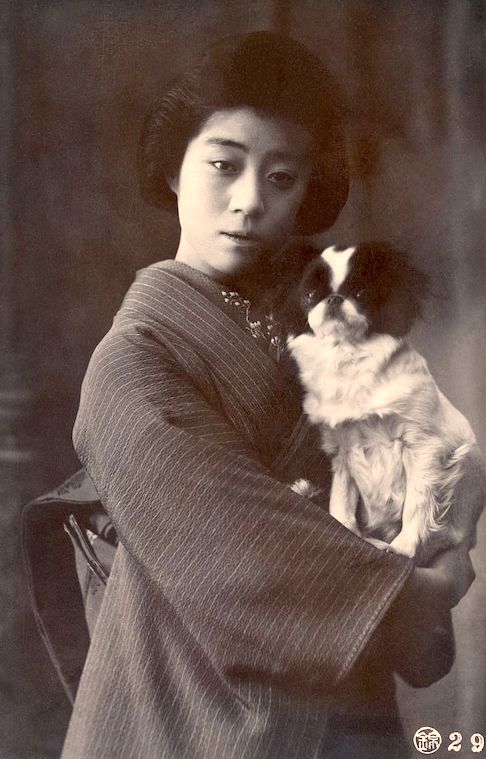 Yachiyo, a famous Geiko from Osaka with a Chin around 1910.

Japan chose to isolate itself from Westerners in the 1600s, when the Tokugawa shogunate took control of the country. Thus, with the exception of a Dutch trading post, Japan was closed to the Western World. This 200-year isolation ended in 1854, with the signing of the Treaty of Kangawa. This is when the first Chin (known at the time as “Japanese Toy Spaniels” and “Japanese Pugs”) were exported. That same year, Commodore Perry brought Queen Victoria a pair of Chin.

Shortly after Queen Alexandra married King Edward VII, son of Queen Victoria, in 1863, the British royal family gifted Alexandra a Japanese Chin. Alexandra continued to collect Japanese Chin as they were imported from Japan and China. She was regularly photographed or painted with her dogs. The queen played a major role in the breed’s increasing popularity in England, as well as in Europe. 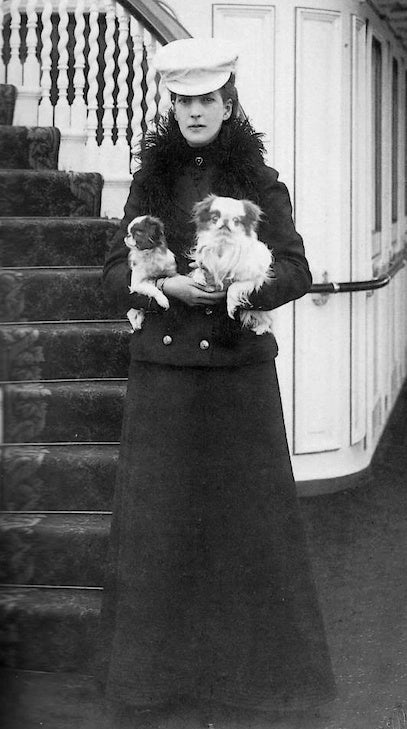 Queen Alexandra in the late 1890s. She played a major role in the breed’s increasing popularity in England, as well as in Europe.

Chin in the United States

In 1888,  the Japanese Spaniel — as the breed was known in the United States until 1977 – was an early breed to become AKC recognized. Soon after, a dog named, “Jap,” became the first “Japanese Spaniel” registered by AKC.

The breed quickly became popular among the American upper crust and by 1940, had inspired en­thusiastic support among Ameri­can breeders. But World War II brought an end to importation from Japan, forcing dedicated American enthusiasts to work with domestic dogs and a few imports from Europe in order to maintain the breed. After 1977, the name was officially changed to Jap­anese Chin.

In Japan, all dogs are known as inu, meaning dog (Akitainu, Shiba Inu, Tosa Inu). The only exception is the Chin.

Bred strictly as companions for royalty, the Chin’s only job throughout time has been to charm, comfort, and amuse humans. Its regal ancestry is revealed in its dignified demeanor. At the same time, it’s easy to understand why the Chin has been a cherished companion for centuries. They are gentle, affectionate, sensitive, and celebrated for their sense of humor.