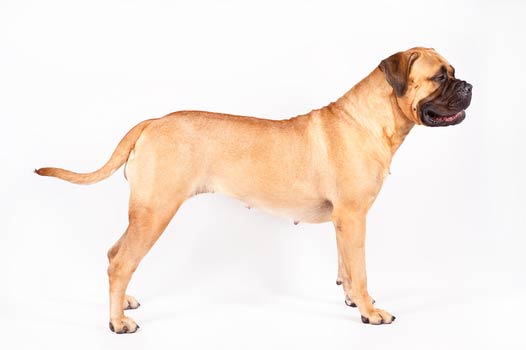 The only mentions of pigment or color of mask in the Bullmastiff breed’s AKC standard are “ears darker in color than the body,” “a dark muzzle is preferable,” and “nose black.” There is actually no mention of “mask” in our standard. However, what mask would imply technically would be the “spectacles” around the eyes, which should be dark/black. Mention of muzzle/mask is actually interchanged to describe the pigment around the muzzle and eyes.

When evaluating the head and expression of the Bullmastiff, one must consider pigment and masking. The AKC standard asks for a “dark muzzle,” and a variable degree of pigment can be seen on the Bullmastiffs of today. Masking and pigment are desired to complete the expression of the Bullmastiff, and a completely black mask extending up to the eyes or ears is not any more desirable than a dark mask that covers the muzzle and eye-rims. Because dark pigment is so important to maintain Bullmastiff expression, a dog with gray, liver, or diluted mask, otherwise known as Dudley pigment (part of an undesirable mutation), should never be rewarded in the ring or used for breeding.

Be wary of how pigment can change the overall look of the head, and rely on manual exam, not visual inspection, to conclude on correct structure. And remember that while a full black mask may be striking, there will always be a natural blend between body color and the mask/muzzle and start of the ear color. Young dogs carry more pigment, and as the dog matures, the mask lessens as the head grows. Be suspect of masks that appear dyed or artificial or have a “dunked in a bucket of black paint” look. Masking is obviously an inheritable trait, and as shows exist for the evaluation of breeding stock, the color of the mask should not be artificially enhanced, as this is against AKC rules, and obviously the dog would not produce the mask that is enhanced.

Please be aware there has been an increase in the use of artificial means to darken or enhance the mask and muzzle of the Bullmastiff. Judges (as well as breeders) should be aware of this disturbing and unnecessary practice and should not reward dogs that have been artificially enhanced, as a Bullmastiff should always be shown in a natural state. While a beautiful black mask on a clear coat can be initially impressive, overpigmentation or lack of pigment can change the appearance of the head on first impression and visual exam.

From the AKC Rules:
“A change of appearance is if the dog has been subjected to any type of procedure that has the effect of obscuring, disguising, or eliminating any congenital or hereditary abnormality or any undesirable characteristic, or anything that improves a dog’s natural appearance, temperament, bite, or gait.”  The DQ procedure is the same as with the DQ for aggression. Before the dog leaves the ring, the superintendent and the AKC Field Representative should be called to the ring, and the judge must complete the “DQ for Change of Appearance” form and clearly explain to the exhibitor that their entry has been disqualified and that it cannot compete at any future AKC event until the dog has been reinstated.