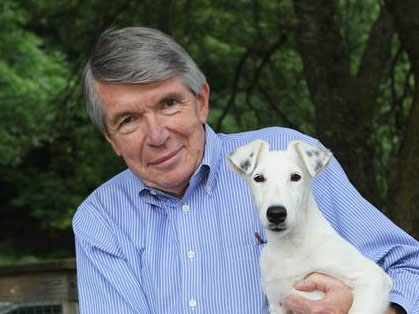 Smith, the 2012 AKC Breeder of the Year, attended his first dog show with a Dalmatian in 1956 and has been involved in the sport ever since. He quickly gravitated to the terrier rings and acquired a Wire Fox Terrier in 1957. His first Smooth came in 1962.

The AKC delegate from the Dalmatian Club of America for 26 years, Smith now represents the Washington State Obedience Training Club. He is in his third separate term as president of the American Fox Terrier Club, having previously served as vice president, AKC delegate, and secretary.

Smith was not active breeding and showing for a large part of the 1990s during his tenure as a member of the AKC board of directors. He has also served on AKC ad hoc committees, most recently the one which revised the judges’ approval process.

In 1999, Smith acquired a Smooth from Eddie Boyes, and his interest and involvement has proceeded full-speed ever since. Absolutely has produced over 50 bred, owned, and campaigned champions, Best in Show dogs, national and regional specialty winners, and numerous group winners. Preservation and maintenance of the breed are paramount, while adherence to the standard is constantly reviewed.