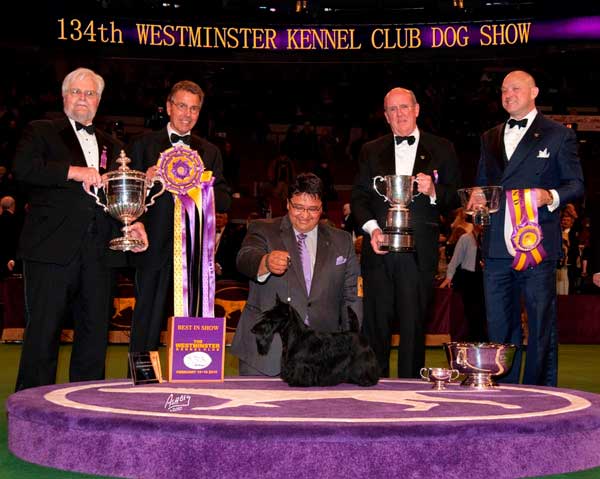 (AKC Breeder of Merit Buffy Stamm was co-breeder of the 2010 Westminster Best in Show winner, GCh. Roundtown Mercedes of Maryscot. In 2008, She was named AKC Terrier Breeder of the Year.)

A few years ago, our most promising young stud dog had already sired the Best of Winners at two national specialties. One of his offspring was among the top Scottish Terriers in the country. We were riding high when we got the dreaded phone call from a breeder who had used him. He had produced a puppy with cerebellar abiotrophy (CA).

This was a newly discovered condition in Scottish Terriers, the first having been diagnosed in 2000. On the advice of Clinical Associate Professor of Genetics Dr. Jerold Bell, our club had established an open database where the pedigrees of all known affected dogs were published. There was controversy about participating in the database. Many breeders feared that admitting to having produced CA would cause other breeders to stop using their stud dogs and buying their puppies. Our decision to participate in the open database was a hard one. The carrier dog and his sons made up most of our stud force. For the first time in 50 years, we had to depend on our bitches to help us reduce our risk of producing CA.

As predicted, of course, stud services at Anstamm initially fell to an all-time low when we posted the name of our stud dog on the open CA database. This, however, was where our policy of keeping outcrossed bitches worked in our favor. While most of our stud dogs were at high risk for producing CA, so far, at least, our bitches were fairly low risk.

With a couple of well-chosen outcrosses, we have bred low-risk males who are just starting their show and stud careers. These dogs will make it possible for us to continue to produce healthy but also typical “Anstamm” Scottish Terriers for the years (or months) remaining until we have a DNA test for our latest genetic disorder.—B.S., 2009