Russian Toy vs. Chihuahua: How to Tell the Difference

There’s a new “Toy” in town! The Russian Toy is one of the latest breeds to be recognized by the American Kennel Club. But this lively little dog might remind you of another beloved member of the Toy Group: the Chihuahua. If you saw them standing side by side, would you know which was which? Learn more about these two charming breeds and how to tell them apart. 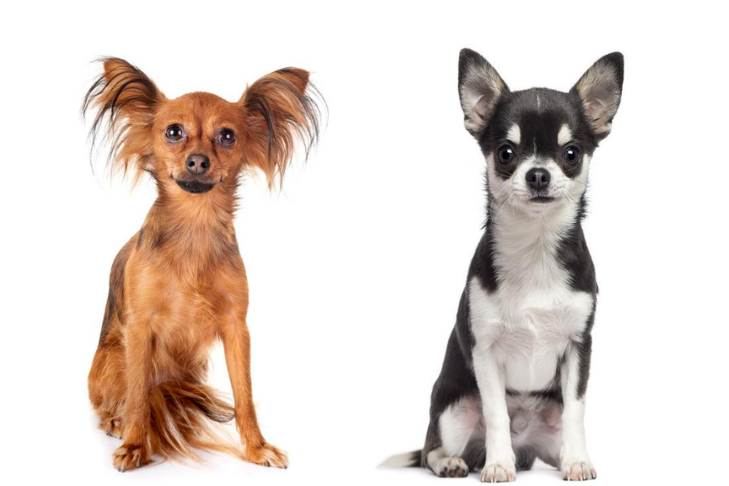 Nona Dietrich has been a breeder for over 20 years and has had Russian Toys for 10. She notes that both Russian Toys and Chihuahuas are small; as members of the Toy Group, they are meant to be companion dogs. And that leads to mix-ups. Dietrich says, “In the beginning, and still today, people confuse the breeds.”

Allynid “Lynnie” Bunten, president of the Chihuahua Club of America, has been breeding and exhibiting Chihuahuas since the mid-1980s. She sees similarities between the breeds, as well, and points out that both come in two varieties: long coats and smooth coats. She says, “I would expect that the two breeds might be confused for one another but might also be confused with some other breeds of similar size and structure.”

Dick Miller, who purchased his first Chihuahua in 1957 and has been judging the breed since 1992, says there are many differences between the breeds. He believes some of the most significant include the coat and the ears. For example, the long-coated Chihuahua should be double-coated, whereas the coat of the Russian Toy has very little undercoat, if any. And the ears of a Russian Toy should more closely resemble those of a Papillon in terms of placement, size, and fringing.

Dietrich adds that there is a difference in body shape. Chihuahuas are rectangular, being slightly longer than they are tall, whereas Russian Toys are square, their length equaling their height. She continues, “Chis have short legs and Russian Toys have long legs. Russian Toys are considered lean and elegant in appearance, Chis not. Chis are not necessarily great performance dogs, like in Agility, while Russian Toys are great.”

According to Bunten, only a few coat colors are allowed in Russian Toys, but Chihuahuas can be any color. Also, there is no height mentioned in the Chihuahua breed standard. It simply states that they should not exceed 6 pounds. On the other hand, the Russian Toy breed standard says the dogs can weigh up to 6 1/2 pounds but should be 8 to 11 inches high at the top of the shoulder.

Although the AKC first recognized the Russian Toy as a breed in 2022, the breed originated over 100 years ago. Dietrich explains, “Russian Toys were developed in Russia in the early 1900s. Breeders started with Manchester Toy Terriers and mixed them with a variety of other dogs they had available. They were trying to achieve a small companion dog for the Russian nobility. They started as all smooth coat and in the 1950s, the long coat was developed.”

On the other hand, Bunten explains, there is no well-documented origin for the Chihuahua. “The history of the Chihuahua, prior to the late nineteenth century, is largely legend. They seem to have originated in Mexico, but more than that is speculation. The modern Chihuahua is primarily a companion animal that fits into smaller spaces, such as apartments.”

The sweet and sassy Russian Toy is a fantastic little dog who will do anything for food. According to the Russian Toy Club of America, they have larger-than-life personalities. Dietrich emphasizes they need regular socialization during their entire first year. She says, “The Russian Toy is very sweet and loyal to its owners but sometimes aloof with strangers. They are little imps with plenty of energy that also love to cuddle on your lap and give kisses.”

The Chihuahua is equally sassy and should have a Terrier-like temperament. Miller believes their definitive characteristic is being a big dog in a small dog’s body. “The Chihuahua is not a ‘wimpy’ dog,” he says. Dietrich agrees, saying Chihuahuas should be self-confident, outgoing, courageous, and loyal. Although they may want to be in charge, they make delightful companions. And despite their bravado, they need protection in some situations. “For example, they should be supervised when outdoors and caution should be practiced when taking them out for walks to protect them from larger dogs and other dangers such as hawks, owls, and such. Chihuahuas can be very protective of their humans and might try to bite off more than they can chew.”

Both these breeds can be wonderful family members. But be sure to do your research to ensure their purpose, size, and personality make a good match. And next time you see a tiny toy dog with a sassy personality, you will know if you’re meeting the charming Chihuahua or the cuddly Russian Toy.

Related article: 10 Things You May Not Know About Breed Recognition
https://www.akc.org/wp-admin/admin-ajax.php
Get Your Free AKC eBook