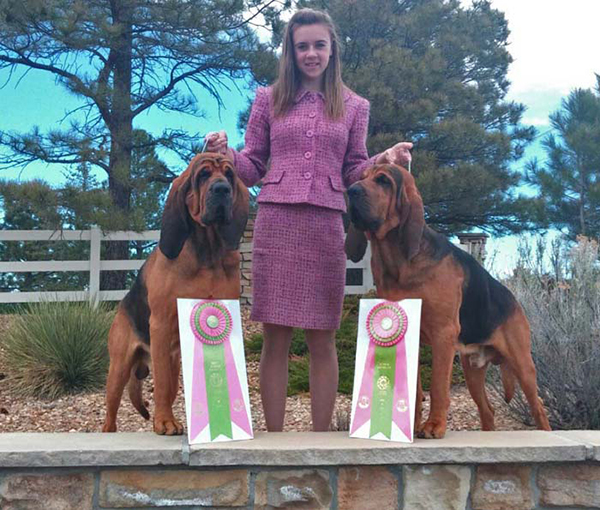 What a thrilling dog show weekend at the Terry-All Kennel Club dog show in Brighton, Colorado.

The Juniors in my area are truly fabulous and most of them are my dog show friends. Honestly besides my family, the Juniors ring is where I get most of my support in the sport. We are a fun group and we all know each other’s dogs and parents, often we have dinners together or pizza in the hotel pool area.

I have been using my younger bloodhound Major more and more as my Junior Showmanship dog, and sometimes in the large Junior classes he gets fidgety. Saturday our judge was Meghann Lord Fenn, from Colorado, and she was herself a Junior handler. She had Borzoi and understands large dogs, hounds, and to my amazement she selected me as Best Junior. We spoke afterwards at the photographer’s set up and she said she appreciates any Junior that has to handle their dog. It was a wonderful win for me, and I am extremely grateful to her, and thankful for the kind comments from the other Junior participants and parents. (After the show I went back to my grandparent’s house and we celebrated with a delicious chocolate cake).

The next day I decided to give Major a break, and I switched my Junior dog from Major to Sebastian (Major’s dad). He is my other bloodhound who I have shown for about 2 years in Juniors, breed, groups, even at the national and the American Bloodhound Club Top 20. Sebastian has some elements for me in Juniors that are easier than Major, but he also has some elements for me in Juniors that are more challenging. Basically even though they are both bloodhounds, I do show them differently to show them each at their best. Unlike the day before where the inside show ring was pretty typical, this show ring was really awful, it was in an uneven dirt floor barn which they did not water down and the dust was really bad for dogs and people. One of my friends was even have some asthma issues.

Okay, so Sebastian and I were less than thrilled with the barn and the dust, but in we went. We showed well, as did Caitlin and her Smooth Collie, which was pulled in front of me in our open intermediate class. I was going to be very happy with 2nd place in the big competitive class, but then the judge sent us around again, and I was able to have another opportunity to “show” my dog to the judge. I asked Sebastian for a free stack, had to fix a foot, but then went on to showcase his ears and headpiece. The judge came over and Sebastian moved when the judge walked behind him, so again, I had to “handle my dog”. Then the judge stepped back and looked at us both and moved me forward. I did not see that coming, but wow!

The line-up for our Best Junior was filled with many of my talented dog show friends. From the Masters Class, Taylor with her Pharaoh Hound, and from the Senior Intermediate class, Ann with a Rhodesian and of course the other class winners who I don’t know quite as well but who are also very good. I had thought the best Junior win would be either Taylor’s or Ann’s as both of these Juniors are beyond good, and their dogs are stellar too.

Before we started Juniors, Sid Marx, the judge, he said two things, (1) Have Fun, and (2) Be Competitive; and it was interesting he is a “hound judge” and the first three dogs in for best Junior were in fact hounds. Since I have a Bloodhound, I did some of the special Bloodhound things – the ears and head, and always the neck; and I believe this day, my Bloodhound gave me the additional handling elements to amazingly take Best Junior. It was a fabulous dog show weekend and one I will always remember; that I took Best Junior one day with one of my Bloodhounds (Major), and then the next day took Best Junior with my other bloodhound (Sebastian). I am sure there are other Juniors who may have done something similar, but this is my first Back to Back Best Junior, let alone with two different dogs (and two different Bloodhounds).

I really want to THANK all the Juniors Judges who have rewarded a Junior (like me) with a more difficult breed (like a Bloodhound) in the Juniors ring!

And, I guess I better apologize to those of you who take this article as nothing more than a brag, because what I really want to say to the other Junior handlers (and even to adult handlers), please continue to handle your dog until the judge is done, as it just might make things turn out in your favor!