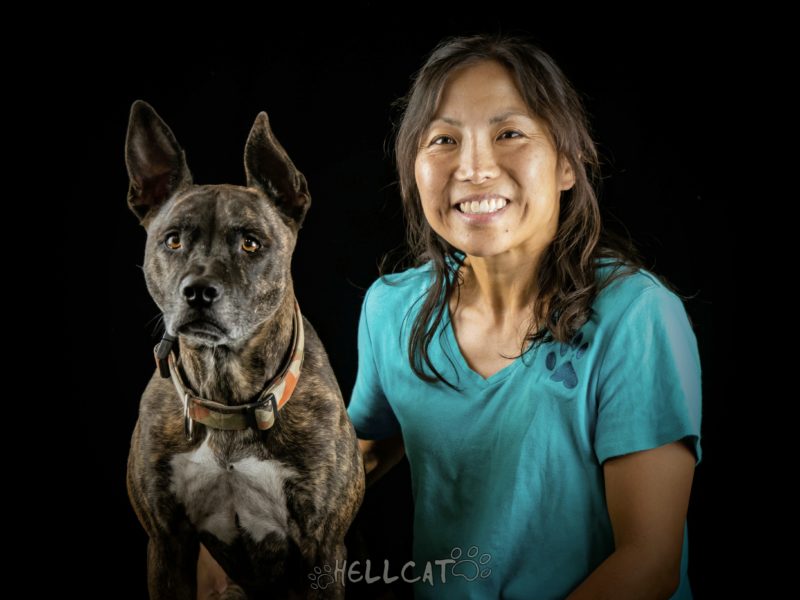 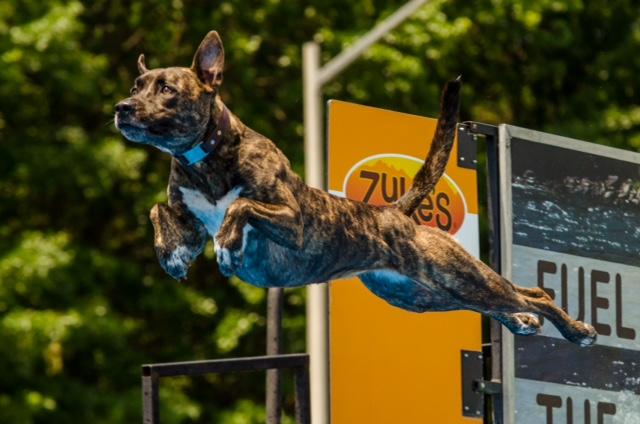 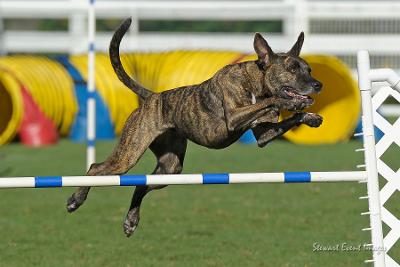 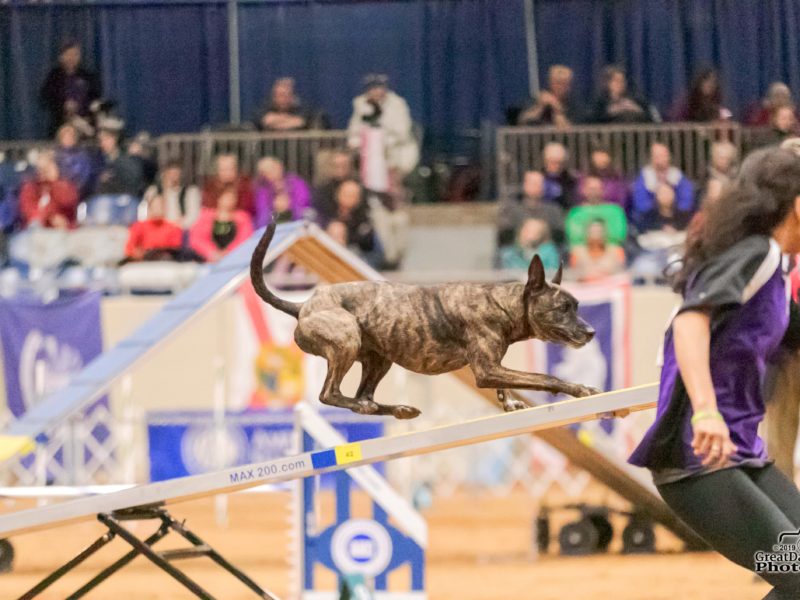 Late Start in Agility Does Not Slow Down Joelle

Joelle, formally known as Ma Belle Joelle MX MXJ MJB XF T2B CA BCAT DM CGC, is an 8–year–old rescue dog who did not start taking agility classes until she was nearly 4 years old. Her owner, Ali Park of Williamsburg, Virginia, thought she was getting a laid-back Mastiff when she agreed to foster Joelle, and she had never heard of agility.

This unlikely team has risen to the top of this fast-paced sport and made the finals of the competitive 20-inch jump height division on their first trip to the AKC National Agility Championship. Read on to hear their story:

The Craigslist advertisement seeking a home for a Mastiff puppy piqued the curiosity of Ali Park.

The then-California resident had always been interested in the giant low-key breed and she asked for a photograph.

“When they sent me a picture of her, she looked more like a pitbull-mix and when I told them that, they said ‘No Ma’am her mom is a 90-pound French Mastiff.’”

Living in an apartment with two older dogs and a roommate, Ali did a reality check and decided that she better think about bringing a dog of that size into her household.

“But then they said they had to get rid of her that night because the movers were coming at 7 am the next day. So, I decided to take her and foster her until I found a great home for her. And you can figure out how that story ended!

It did not take long for Ali to see that she did not have a couch potato as a house guest.

“I knew right away she was no Mastiff mix. For one thing, she was high energy. When I took her for walks, I would often let her have some off-leash time so she could burn some energy, and she would do these crazy zoomies at warp speed, zig-zagging in and out of bushes. Her speed was jaw-dropping – nothing like the calm dog that her previous owners assured me that she was.”

A DNA breed identification test revealed no traces of Mastiff – but showed a heavy concentration of American Staffordshire Terrier and Boxer.

As Ali became convinced that she needed to find a more appropriate home for Joelle, she found herself more attached to the beguiling pup.

“She was super sweet and stunningly beautiful, but also crazy energetic, and in my mind, I thought she would be difficult to train and control. But as I fell in love with her, I did research on high-energy dogs and learned that they in fact have the potential to be even more trainable than others. This was completely eye-opening to me.”

Instead of finding a more suitable home, Ali decided to create a better environment for Joelle. They began running every day and playing ball and disc at parks. Joelle proved to be an amazing retriever.

“On several occasions, people came up to me and asked if we did competitions. That got me thinking about competing with her, but I did not know how to get started.”

In 2014, when Joelle was 3 years old, Ali relocated for her job as an active duty musician with the US Army. They moved to Virginia where Ali started instructing at the US Army School of Music.

The move opened more opportunities for training. Joelle started obedience classes, earned the AKC Canine Good Citizen title, and even passed therapy dog certification – a role in which she is calm and well-mannered!

A friend told Ali about the sport of agility, and she began watching videos of the fast-paced obstacle course for dogs. So, at nearly 4 years of age, Joelle began agility training – late in life for most dogs that compete in the sport.

“We were having fun, but it was a huge learning curve for me, and I felt really bad that I was making so many mistakes with my poor girl. Then we hit a wall with the weave poles. She was very slow and did not enjoy it. Having taken several classes during our first year, I decided to take a break for about 6 months. When we started agility training again, we switched to a different facility where the classes were not ‘just for fun.’ I like to dream big, and I wanted Joelle and I to become the best team we could possibly be.“
The team started competing in agility in February 2017 when Joelle was 5 ½ years old, but they struggled with drive and speed. Ali knew how fast that Joelle could run but she did not demonstrate that speed in competitions.

“I knew that part of the reason was that I didn’t know what I was doing, and I was always correcting her. I often lamented that she is such an incredibly smart, athletic dog who was extremely biddable and fast that I wished she was my second agility dog.”

But their dedication paid off in fall 2017 when the pair started coming together as a team, and Joelle turned on the gas, putting in much faster times. The success inspired Ali to consider entering national events instead of just local trials.

The two qualified for the 2019 AKC National Agility Championship (NAC) in Tulsa, Oklahoma, and decided to enter “to get some experience under our belt and have some fun. My goal was to stay connected with my dog and to run fast and clean.”

At the NAC, Ali and Joelle put in three clean (without error) runs and suddenly found their names on the list of finalists for the competitive 20-inch jump height – the only mixed-breed dog to make the finals of that division.

“Nobody told us what a feat that would be, so I honestly never ruled out the idea. Running in the finals was a surreal experience. Joelle ran her heart out as she had done in all her previous runs, and if it weren’t for my memory slip near the end, I’m sure she would have done very well, placement wise.”

In addition to agility, the now-8-year-old Joelle competes in dock diving with a personal best jump of 25-feet and coursing and FAST CAT. Ali has added two other rescues to the family: a 5-year-old pitbull and a 2-year-old pit mix who is doing very well in agility. On their off days, the entire family loves to go to the beach for exercise and swimming.

Future goals for Joelle include qualifying for more national events, including the 2020 NAC and the Westminster Kennel Club Master Agility Championship.

“It would be amazing to advance into the finals in these national events in the future, but I have to remind myself that this is all about having fun with my dog.”