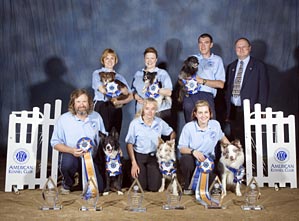 More than 1,000 of the Nation’s Most Athletic Dogs Competed for Top Honors

Agility events allow dogs to demonstrate their athleticism and versatility by racing against the clock and overcoming a challenging course of different obstacles. Success requires proper training, as it is a sport of physical skill, control, patience and – most importantly – teamwork between handler and dog. There are six different height categories, so dogs compete fairly according to size.

Six agility dogs and their owners – one dog/handler team in each of the six height categories – were crowned at the event, which brought together more than 1,000 dogs from across the country.