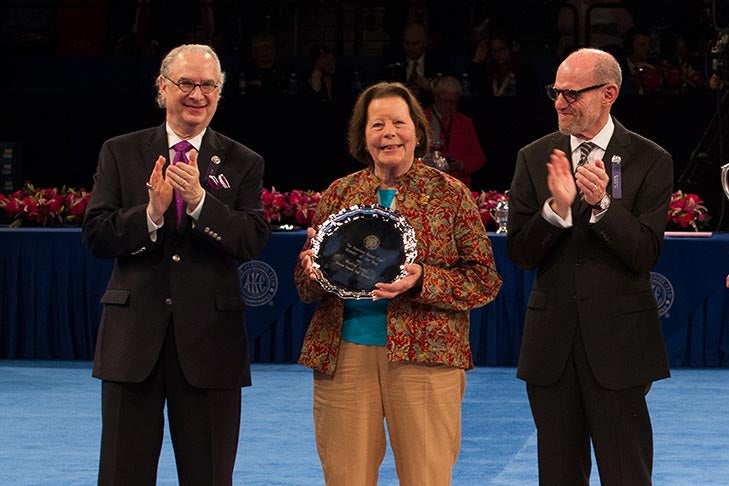 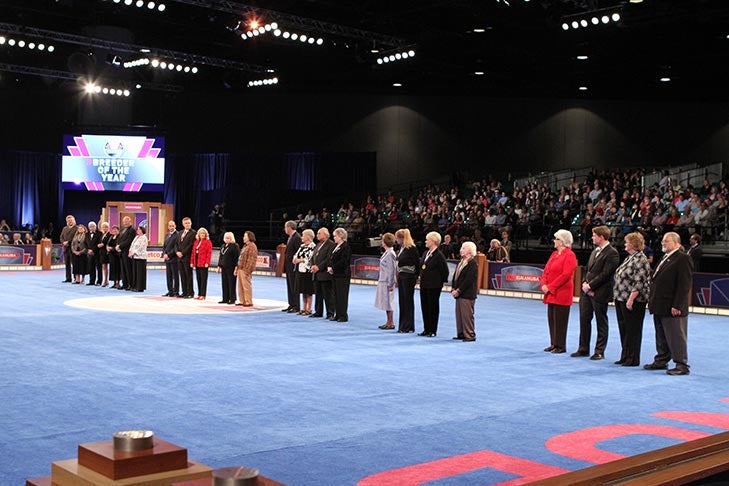 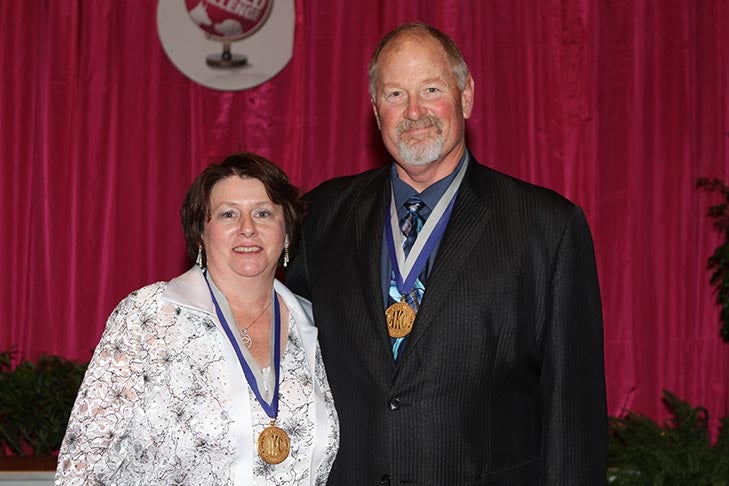 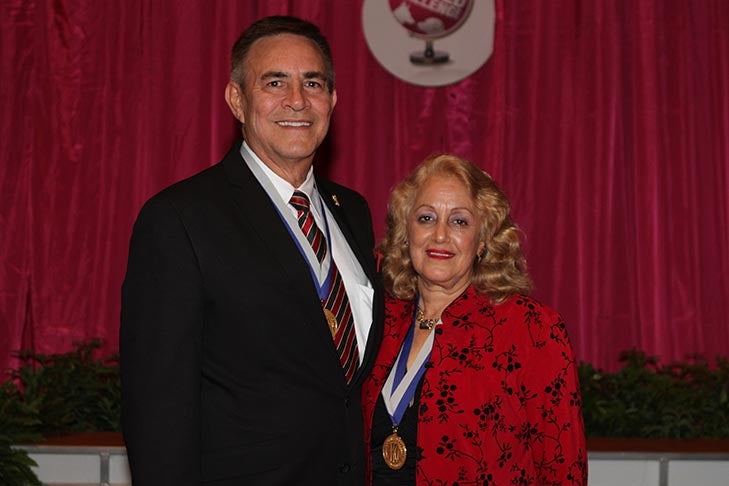 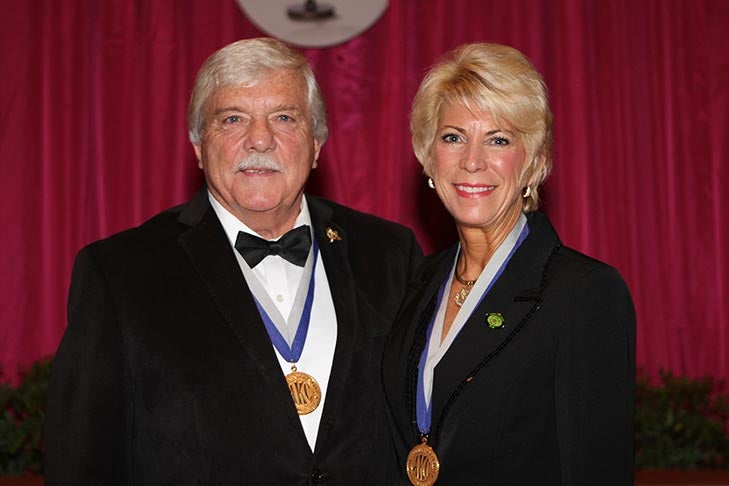 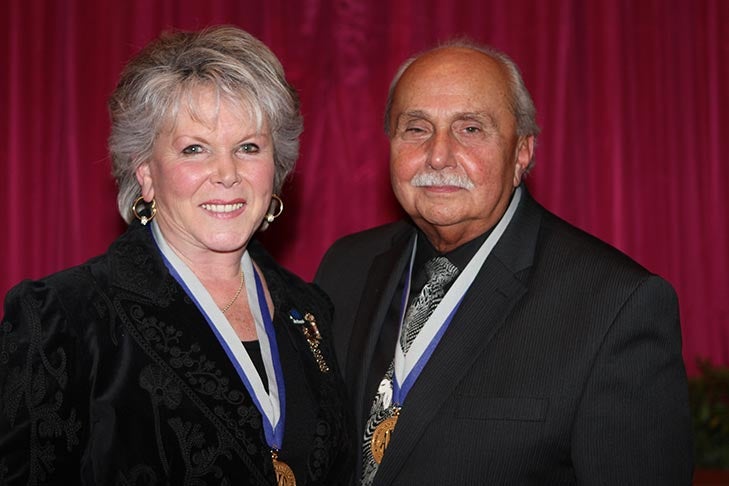 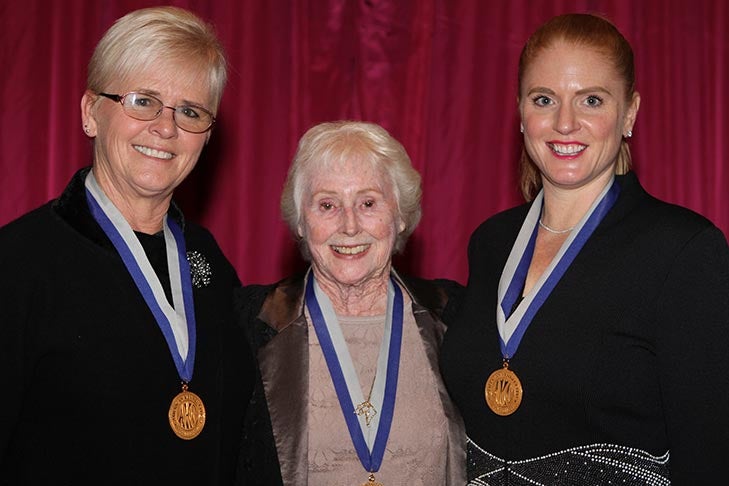 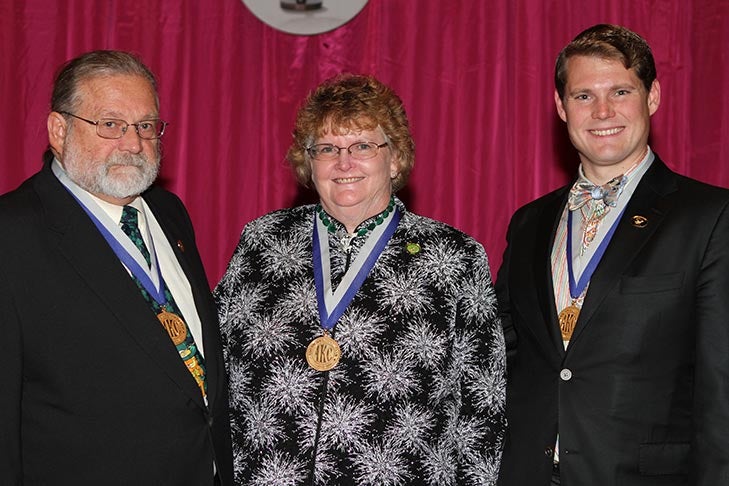 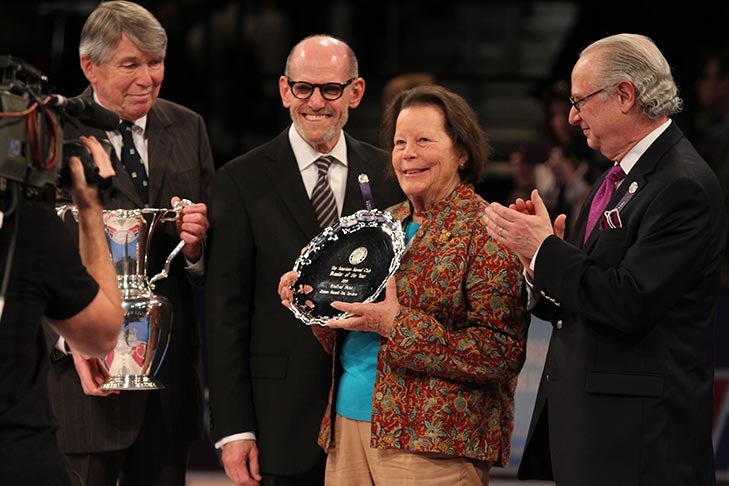 Winifred Stout of Foster, Rhode Island was presented with the 2013 AKC Breeder of the Year Award for her Quissex Smooth Fox Terriers at the AKC/Eukanuba National Championship on Sunday, December 15, 2013.  The annual award recognizes the hard work and commitment of breeders dedicated to improving the health, temperament and quality of purebred dogs.

“Breeders are an integral part of everything AKC does, and we’re proud to recognize them annually at the AKC/Eukanuba National Championship with the AKC Breeder of the Year Award,” said Michael Canalizo, AKC’s Director of Event Management. “Congratulations to Winifred for achieving one of the sport’s highest honors. Her years of dedication to the Smooth Fox Terrier have made a great impact on the breed and the sport of purebred dogs.”

Every fall, one honoree is announced from each of the seven groups: Sporting, Hound, Working, Terrier, Toy, Non-Sporting, and Herding. From those seven, one Group winner is selected as “AKC Breeder of the Year” during the AKC/Eukanuba National Championship.

As the 2013 AKC Breeder of the Year recipient, Stout will be honored with a commission from a canine portraitist to memorialize a prominent dog from her kennel and her name will be inscribed on a perpetual trophy, both of which will be displayed at the AKC headquarters in New York City.

About Quissex Smooth Fox Terriers
Stout grew up in the 1930s on a farm outside Philadelphia, where she was introduced to Junior Showmanship by her foxhunting neighbors. After graduating from college in 1955, she acquired her first Smooth Fox Terrier from Barbara Fallass, whose Andely kennel was prominent before and during World War II. Stout moved to Boston to work as an editor for the Atlantic Monthly, married, and raised her first litter of Smooth Fox Terriers in 1960. After moving in the late 1960s to a farm in Rhode Island, she began a 35-year teaching career, and started breeding Smooth Fox Terriers under the “Quissex” prefix (from the French qui s’excuse, s’accuse, which is loosely translated as “Never explain!”).

Quissex has produced some 300 AKC champions, specialty and all-breed Best in Show winners and performance titlists. Stout joined the American Fox Terrier Club in 1962 and has served in numerous positions, including editor of the AFTC Annual and manager of the club’s rescue and breeder referral programs. She has served a number of consecutive terms on the AFTC Board of Governors. She has said that a life in dogs has brought her deep and rewarding friendships with man and beast and the intellectual challenge of a learning experience that never ends.

All seven Group honorees were presented with medallions during the show on December 15, 2013.  Group winners included: