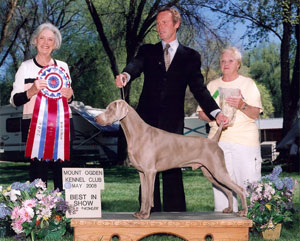 “We are excited to see such an exceptional dog complete the AKC Grand Championship title. This title was created to give breeders and owners a way to showcase their AKC champions and that’s just what we’re seeing,” said Robin Stansell, AKC Vice President of Event Operations. “Congratulations to Stoli and his breeder, owners and handler who are very deserving of this honor.”

Proving he can excel in both AKC Conformation and AKC Performance events, Stoli, a multiple Best in Specialty Show and Best in Show winner became the first and only Best in Show winning Weimaraner to earn the AKC Master Hunter title in March 2009.

Stoli’s co-owner and handler recently suffered a great loss when his breeder and owner Elizabeth Krupinski succumbed to a battle with leukemia just two short months ago. Walden described her as, “an avid AKC supporter and quality person.” Krupinski’s obituary cited breeding Stoli as one of her greatest accomplishments in her life.

“To see Liz’s dream of a versatile Weim that loved to show, loved to hunt and was the ultimate best friend become the first Grand Champion is truly special,” said Tim Bintner, Stoli’s co-owner and husband to the late Elizabeth Krupinski. “The breed was her passion and I only wish that she could have been here to share it with us, although in Stoli, I know her hard work and dedication will live on.”

This new title is available to AKC Champions of Record, creating the opportunity for Champion dog owners to return to the show ring with their dogs and further showcase the quality of their breeding stock. Competition for this new title began at AKC all-breed, group and specialty shows on May 12, 2010, concurrent with the implementation of the 2010-2011 AKC Point Schedule.

Stoli, like all dogs who complete their Grand Champion title will receive an invitation to the AKC/Eukanuba National Championship.

Stoli is the first and only Best in Show winning Weimaraner to earn the AKC Master Hunter title. Photographer: Jennifer Follett

Stoli trotted into the AKC history books for a second time when he became the first dog to earn the AKC Grand Champion title. Photographer: Sheryl Hoyle