Top Dogs Appear at Top of the Rock 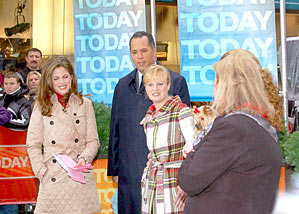 The American Kennel Club® announced today that the Yorkshire Terrier, fondly called the “Yorkie” by millions of enthusiasts, has overtaken the beloved Golden Retriever and the iconic German Shepherd to become the second most popular purebred dog in America according to AKC® registration figures. The Labrador Retriever is the most popular purebred dog in the country once again—a spot it has held since 1991.

The 10 most popular breeds appeared at the Top of Rock™ Observation Deck at Rockefeller Center, symbolizing their status as “top dogs.” Top of the Rock™ includes three lower levels and three upper levels housed in the 70-story architectural heart of Rockefeller Center, 30 Rockefeller Plaza, and offers a stunning, unobstructed, 360-degree panorama of New York City. A photo opportunity took place of the Labrador Retriever being crowned on the 69th floor, amidst a dozen dainty Yorkshire Terriers and the other breeds that rounded out the “top 10.”

AKC’s Gina Lash appears on NBC’s Today Show to announce the top dogs in the nation according to AKC registration figures.

The Labrador Retriever, (#1) strikes a pose as AKC’s Lisa Peterson looks on.

The top 10 dogs in the nation line up for a photo shoot while AKC’s Lisa Peterson narrates the presentation.

A Yorkshire Terrier shows off her shiny coat.

Two Yorkshire Terriers celebrate their moment in the spotlight.

Proud Yorkie owners surround the Labrador Retriever as she regally models her crown and cape.

While they might be rivals for the top spot according to AKC registration figures, the Yorkshire Terrier and Labrador Retriever make perfect pals.

The media clamor for the Lab’s attention at the photo shoot.

The Labrador Retriever shows off her regal demeanor.

The Labrador Retriever finds all this attention rather tiresome!