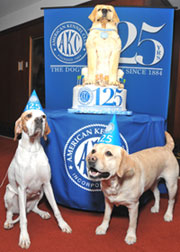 For the 18th consecutive year, the Labrador Retriever is the most popular purebred dog in America, according to 2008 registration statistics released today by the American Kennel Club® (AKC) But, while more than twice as many Labs were registered last year than any other breed making it a likely leader for many years to come, the Bulldog continues to amble its way up the list. The breed made news last year by returning to the AKC’s Top 10 for the first time in more than 70 years and now has jumped 6%, advancing two spots to land in 8th place.

“The playful Lab may still reign supreme, but the docile and adaptive nature of the Bulldog is gaining ground as a family favorite,” said AKC Spokesperson Lisa Peterson.  “It’s no surprise to learn that this devoted family companion is still growing in popularity.”

Launching a celebration of the AKC’s 125th anniversary the current ‘top dog,’ a Labrador Retriever, joined a Pointer — the most popular breed at the time of the organization’s founding — at a party thrown in recognition of this milestone, complete with a canine-themed cake.

125 Years of History
Like the Bulldog, the popularity of breeds ebbs and flows over time.  The AKC is proud to be celebrating its 125th Anniversary during 2009. In 1884 at the time of the organization’s founding, AKC registered only nine breeds versus the 161 it recognizes today:

These original breeds are all current members of the Sporting Group — dogs bred to help man find and retrieve game. They all have innate instincts in the water, field and woods. While none of the original nine is anywhere near the AKC Top 10, the qualities that made them effective hunters — trainability and desire to please — make them ideal family dogs today.

“I think the comparison of our original nine to the current top 10 illustrates the different needs that dogs fill today,” said Peterson. “In the 1880’s most breeds served a specific purpose or function. Today dogs still serve man and in even more diverse roles — from guide dog to bomb detection K-9 – but most of all, dogs are now companions that ground us to nature in a busy and increasingly technological world.”

Pet Preferences: Top 50 Cities
While time periods are indicators for the popularity of certain pets, so is geography. Each year, AKC looks at the most popular breeds in each of the 50 largest cities in the U.S.  Some highlights:

Some of the most notable recent trends in the past decade include:

Dog lovers can see and learn more about all of their favorite breeds on Saturday, January 31, 2009 when the AKC/Eukanuba National Championship – where the country’s top dogs compete for $225,000 in prize money and the title of “National Champion” – airs on Animal Planet and the Discovery Channel from 8-11 p.m. (ET/PT). Highlights from the AKC Agility Invitational will air on Animal Planet on Saturday, Feb. 7, 2009 at 8 p.m. (ET/PT).