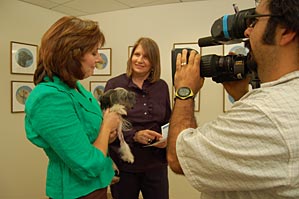 On July 10, CNN paid a visit to the AKC Headquarters in New York to kickoff AKC’s new presidential poll encouraging dog lovers to vote for Barack Obama’s new “number two”. AKC initiated the poll based on Obama’s promise to his family that they would get a dog following the presidential race. All five breed were represented and each had their turn to woo reporter Jeanne Moos and her crew. AVP Communications, Daisy Okas was interviewed for the segment.

To vote for the next canine candidate for the White House visit www.presidentialpup.com