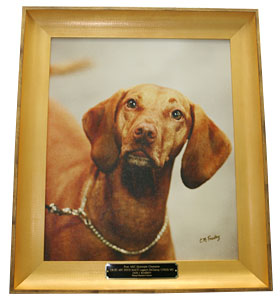 Dog Recognized as Most Accomplished in AKC’s 122-year History

New York, NY – The American Kennel Club® announced today that a portrait of the most titled dog in AKC® history, the Vizsla CH FC AFC OTCH MACH Legacy’s DeChartay UDX(5) MH, affectionately known as “Chartay”, will be unveiled in a special ceremony at the AKC Operations Center in Raleigh, NC on August 18, 2006.

Chartay became an AKC Conformation Champion (CH) in 1993; acquired her Field Champion (FC) title and Amateur Field Champion (AFC) titles in April and November 1995, respectively. She went on to earn the Obedience Trial Champion (OTCH) in 1997 and then earned the Master Agility Champion (MACH) title in June 2000.

“I’m so proud of what she’s accomplished and by donating her portrait to the American Kennel Club I’m hoping it will represent a goal for other people to work towards,” said Chartay’s owner and handler Jack Sharkey, of Alexandria, VA. “Chartay’s quintuple crown not only highlights the Hungarian Vizsla’s natural abilities but demonstrates the versatility of what pointing breeds are all about.” Chartay, whelped on May 31, 1991, was bred by Dianne Shearer and Gregory Gollick and passed away on August 1, 2004.

AKC President and CEO Dennis B. Sprung, Chief Operating Officer John L. Lyons, and Assistant Vice President of Companion Events Curt A. Curtis, other AKC employees, and Vizsla Club of America members will be on hand to celebrate the outstanding accomplishments of this team. The 27- by 30-inch framed photograph portrait, taken by Christina W. Freitag at the Vizsla Club of America National Specialty, will be displayed in the Lobby of the American Kennel Club Operations Center in Raleigh.

During their seven-year journey, Chartay and Sharkey, himself an AKC Field Trial and Hunting Test Judge, exhibited to numerous AKC judges in various events. Sharkey said obtaining the OTCH title in Obedience was the most challenging of the Championships to complete.

“It is always thrilling to be the judge who awards the last points needed to complete an OTCH, but to be part of this particular dog’s amazing career is an honor,” said AKC Obedience Judge Marie Huffman. “Chartay was always a pleasure to see in the obedience ring. She was a happy, willing worker who came into the ring with a style and a presence that personified the AKC’s vision of an ideal performance dog. Jack Sharkey was always a gentleman and a true sportsman whether in the ring competing or outside of the ring. He is the epitome of the exhibitor in our sport of obedience. Together they make a team truly worthy of special recognition.”