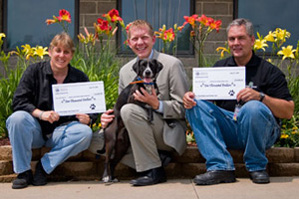 NEW YORK, NY – The American Kennel Club® and AKC Companion Animal Recovery (AKC CAR) are pleased to announce that the AKC CAR Canine Support and Relief Fund has donated $10,000 to the Kirkwood Foundation for the Friends of the Animal Shelter Fund, the non-profit group associated with Cedar Rapids Animal Control and $10,000 to the Friends of the Animal Center, the non-profit group associated with Iowa City Animal Control for their tremendous efforts to care for the displaced animals during the recent flooding in Iowa.

Presenting checks on behalf of AKC CAR to Misha Goodman, left, of Iowa City Animal Control and Sgt. Kent Choate, right, of Cedar Rapids Animal Control is Cedar Rapids Kennel Association President Scot Northern. Pictured with Scot is Buddy, a stray dog that was rescued during the flooding and has now been adopted.

The AKC CAR Canine Support and Relief Fund is a permanent charitable fund which provides resources, support and other assistance to not-for-profit animal shelters and similar not-for-profit organizations providing care for domestic animals orphaned or displaced as a result of natural or civil disasters.

Both animal control agencies were tragically affected by the rising flood waters. They had to evacuate their permanent facilities and at the same time set up temporary shelters for more than 1,000 displaced companion animals for a month in the aftermath of the devastating flooding.

Cedar Rapids Animal Control and the staff at the Kirkwood facility have now successfully reunited all displaced dogs with owners, adopted out others, and worked with regional shelters and purebred rescue groups to find homes for all dogs temporarily housed at Kirkwood College.

Iowa City Animal Control, after setting up a temporary shelter at the Johnson County 4-H Fairgrounds, found themselves up against a timetable to move displaced animals from the fairgrounds to a new temporary facility since their permanent home had been extensively damaged in the flood. All animals have been safely relocated to the animal control’s new temporary home.

In addition to AKC CAR’s $10,000 donation to each animal control group’s not-for-profit organization for their response, earlier donations such as crates, supplies and other resources were sent to the area immediately after the disaster.

AKC and AKC CAR would like to thank Scot Northern, President of the Cedar Rapids Kennel Association for his leadership role in helping us coordinate disaster relief in the area and for all the volunteer work area club members contributed to this effort.

In addition, we would like to thank all the individuals, AKC clubs and other organizations that assisted with monetary donations. We would like to acknowledge the various clubs who have contributed so far, including the thoughtful and creative “matching fund” program conducted by the Cardigan Welsh Corgi Club of America.

The Bichon Frise Club of America

“AKC and AKC CAR will continue to assist those animal control agencies and other non-profit sheltering and rescue organizations that may find themselves faced with caring for displaced companion animals during natural disasters,” said Tom Sharp, VP and CEO of AKC CAR. “Currently we are working with local authorities in California, sending crates and supplies where needed as wildfires remain a threat throughout the warm summer months. Additionally, we are coordinating with local chapters of the Red Cross and state emergency personnel in Texas and other areas now that hurricane season may make evacuations necessary for pet owners.”

Four years ago, the roof of my two-story kennel flew off in the pounding wind of one of the several hurricanes, which blew through Florida. The kennel and apartment above were a complete loss. Twenty plus dogs, some were clients’ dogs sent home and others my own, were farmed out to foster homes. With much certainty, in a flash, my family’s life as we knew it had changed. My mantra became “everything happens for a reason.” So, one could say that, I am quite sensitive to the affects in the aftermath of a natural disaster.

One year after that hurricane, an opportunity to work at the American Kennel Club crossed my path. Here I am, in Weston, Missouri (approx. population of 1,500) working as an AKC Executive Field Representative, attending conformation dog shows in the Midwest.

The weekend of June 21, 2008 my scheduled show to work was the Hawkeye Kennel Club in Iowa City at the Johnson County 4-H Fairgrounds. Due to the flood conditions, it was obvious that the shows either would be relocated or cancelled, the latter being the outcome. The fairgrounds became a FEMA and Red Cross disaster relief compound, as well as the Iowa City Animal Care & Adoption Center. The Animal Shelter in Iowa City flooded and evacuated all animals. They relocated, making their home in three barns at the Fairgrounds. I contacted my office and asked if I could go and work as a volunteer in the animal shelter. Without hesitation, Mr. Darrell Hayes, AKC’s Vice President Judging Operations said, “Absolutely, go, whatever you need, let us know.”

I spoke with Liz Ford on Friday, the volunteer coordinator for the Iowa City facility. Liz asked if I could do a toy drive, as the dogs were all bored in the confines of the makeshift facility. Saturday morning I walked store to store in the ‘small but mighty’ downtown of Weston, Missouri. Generous Weston storeowners, individuals and the Yorkshire Terrier Club of Greater Kansas City donated more than $500 to the toy drive. A local artist, Marie Mason, donated 100 t-shirts printed with her painting of ‘Journey Home’. The painting of dogs and cats at sea seemingly fit the situation very well. Saturday evening the neighbors took me to buy toys and grab a bite to eat.

Sunday morning I hit the road with toys, t-shirts, dog food, leashes and collars in tow. The four-and-a-half hour drive to Iowa City went quickly with the interstate highways clear and passable. The flooded crops along the journey weighed heavy on my mind, knowing the economic struggle the farmers will face in times to come.

One of the displaced animals

There were approximately 300 assorted species of animals at this shelter, and other volunteers tell me that there were about 800 animals in the Cedar Rapids emergency facility. Staff was on call 24 hours and working 12 hour shifts. Dedicated volunteers reported to work like soldiers called to duty.

Volunteers came to help from around the country. I met Diane, a College Professor from Athens, Georgia with a fondness for English Springer Spaniels. On her way to visit family in Wisconsin, she thought Iowa City was perfect to stop and volunteer for a week at the shelter. Another woman flew in from Chicago, and a group of college students studying to be vet technicians came from Minnesota. Regular volunteers, working prior to the flood, came to the shelter at scheduled times knowing exactly what to do and how to do it. One young woman split her days between the Cedar Rapids and the Iowa City locations, which was about a thirty-minute drive one-way.

Dachshund and Rottweiler keeping safe until owners can return home

Misha Goodman, the Iowa City shelter director, spent her days investigating potential buildings to relocate the operation. After all, this was only a temporary set-up and there is no guarantee that, the flooded shelter is restorable. The tireless staff of four to five people never missed a beat. They moved methodically from barn to barn caring for animals, accepting new arrivals, doing temperament testing, bathing, giving medications, taking donations and working to reunite the displaced animals with their owners. The cool control, organization, and determination of the staff and volunteers, to keep business as usual, for their own peace and for the animals were amazing.

Cats at the shelter in donated Cat Havens

As for me, I did manage to leave with a dog. An adoptable black Standard Poodle named Gloria. Gloria was already in place as an adoptee prior to the floods. Volunteer coordinator, Liz, said that Gloria was a kindred spirit and her beautiful eyes could look into the soul. She was right. I contacted the Poodle Club of America Rescue and they arranged for me to transport Gloria to one of their foster homes. Today, I was happy to hear that Gloria has found a home in St. Louis!

Gina Wieser and Gloria Share a moment after a grooming session

This is mere glimpse of a long, complicated journey home for the people and animals left to rebuild after the floods. The short time I spent with the animals, the shelter staff and the volunteers was quite a revelation, rewarding, and extremely humbling.

I read this “Quote of the Day” in daily inspirations. I cut it out and put it on my fridge as a reminder.

How true it is…

“Sometimes when we are generous in small, barely detectable ways

it can change someone else’s life forever” ~ Margaret Cho

HOW YOU CAN HELP

In anticipation of the needs of future canine victims, we are accepting monetary donations. If you wish to make a tax-deductible donation, you may send it to:

The AKC CAR Canine Support and Relief Fund is a permanent charitable fund which provides resources, support and other assistance to not-for-profit animal shelters and similar not-for-profit organizations providing care for domestic animals orphaned or displaced as a result of natural or civil disasters.