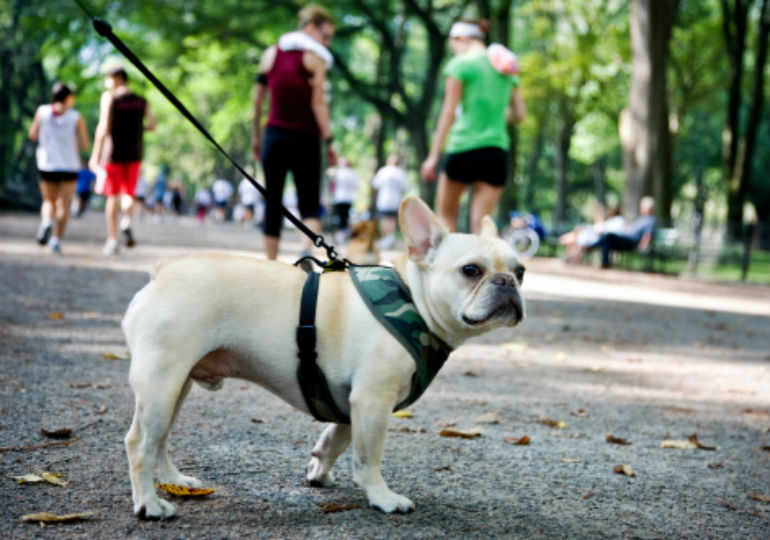 The first moment I met my 8-week-old Leonberger puppy, Miss Emily von Alpensee, she took one look at me and peed on the floor.

I used that opportunity to open a conversation with the breeder about housetraining.

“Oh, it’s easy,” the breeder said. “Leonbergers get it very quickly. As soon as you see the puppy circling and scratching, pick her up and take her outside.”

I paused, thinking about how this would work, given our unique situation.

She pondered a few moments, then gave her advice.

“Good luck,” was all she could offer.

So, Emily and I set off into a strange, terrifying, uncharted sea, at least where housetraining was concerned. There are rules that apply for big puppies in homes with yards and rules for tiny puppies living in apartments. But housetraining an oversized pup in an undersized urban studio would take a little creativity and a great deal of patience and humor.

My first step was to hit the Internet and the library for guidance. Most modern training manuals will have a chapter or two devoted to the topic. Recently, there have also been whole books about it, some more than 200 pages long, such as:

Many trainers offer classes on housetraining, in addition to offering puppy socialization classes.

Beyond that, there are dozens of products, such as piddle pads, potty bells, and various kinds of scents, sprays, and enzymatic cleaners to help make the process smoother.

Who would believe that the simple act of teaching your dog to refrain from, as McCullough put it, turning “your nicely decorated home into a canine outhouse” could be so complicated?

How long did it take before Emily got the idea? It was only a couple of weeks before she started crying when she had to go, but since I couldn’t get her down to the street quickly enough, we had several accidents. Also, she had trouble generalizing what she learned in the apartment to the many places and situations that, like many urban dogs, she had to deal with. It wasn’t just a matter of distinguishing between house and yard. She had to learn to control herself in:

If you approach it with an upbeat attitude and humor, you may one day look back on this period of intense sleep deprivation with a smile. I cherish the memories of being out with Emily at 1, 2, and 3 a.m., alone on the city streets except for an occasional taxi, other puppy owner, and, every so often, a drunk staggering home from a bar who would cheer for Emi’s progress as enthusiastically as I did.

It was rough and messy, and I was about to plunge into a state of despair, when the trainer in our puppy socialization class (where Emily peed a few times on the floor) gave me a gift — a sheet with lines drawn for every half hour of the day and eight columns: Place, Food, Water, Activity, Pee, Poop, Accidents, and Notes.

For several weeks, I wrote everything down. Soon, I was able to see patterns and that allowed me to get ahead of Emily. For example, every night at around 2 a.m. she’d start to cry and scratch. By the time she started fussing, it was too late. So, I set an alarm for 1:45 and got her to the street in plenty of time. Writing everything down, including when she had an excitement squirt after people squealed at her (which was often), made all the difference. By the time she was five months old, we were over the worst of it, and by eight months her potty habits were, I say with no small amount of pride, impeccable.