How to Clicker Train Your Dinosaur 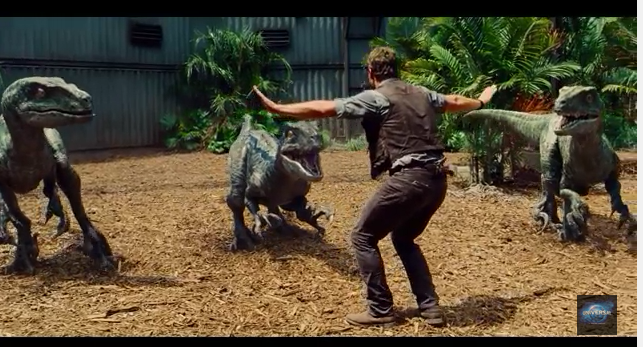 Sure, it has stunning special effects that make it seem as if those dinosaurs are going to leap into your lap. It has a hunky heartthrob, Chris Pratt, playing the central role of dino wrangler Owen. On its first weekend, it grossed an eye popping $200+ million.

But, for many, the buzz surrounding Jurassic World isn’t about any of that. It’s about whether, in a real-life situation, Owen’s clicker-training technique would have gotten him eaten in the first scene.

Reactions from professionals ran the gamut from outrage (“For clicker trainers this was painful to watch!”), to giddiness, as exhibited by images posted on Twitter and the web site Nerdist of zookeepers around the world copying the super-macho pose Owen assumed to keep his raptors at bay. (The chickens and the walruses were cute, but our hats are off to the guy striking the movie pose in front of three bemused rhinos.)

So, how was Owen’s clicker proficiency? And is it possible to use this method to train a dinosaur? We asked Karen Pryor, who pioneered clicker training, for some answers.

As to whether this method could work on a gigantic prehistoric reptile, Pryor’s answer was a resounding “Yes!”

Today, zookeepers routinely click-and-treat all kinds of wild animals. That includes one that is as close to a dinosaur has we have in this modern world—the Komodo dragon. These lizards, which live on the islands around Indonesia, can grow to 10 feet long and weigh as much as 200 pounds. Smithsonian.com characterized them as “an all-purpose killing machine,” all teeth and claws and toxic saliva.

But through the use of a clicker, a target on a stick, and a lot of dead mice, these fearsome creatures have been taught to follow zookeepers around like puppies.

But what about the way Jurassic World’s hero was clicking?

“He was not using it very well,” Pryor says. One big mistake was that he clicked over and over. This would just confuse his dinosaurs because the sound—a single click—is supposed to mark the exact moment when the animal is doing what the trainer wants.

Owen clicked frequently and way after the movement was done. This was telling his toothy charges that they had finished the exercise and that something yummy, like a dead rat, was coming.

“He was using the cue to signal that the work is done, now here’s your treat,” she said. “It’s a beginner’s mistake.”

Had he fine-tuned his technique, Owen might have been able to teach his monsters to do something useful, like close their mouths. “In the case of the Velociraptor,” Pryor says, “I think it would be wonderful to train them to close their mouths—and keep them closed.”