What to Wear to Your First Dog Show 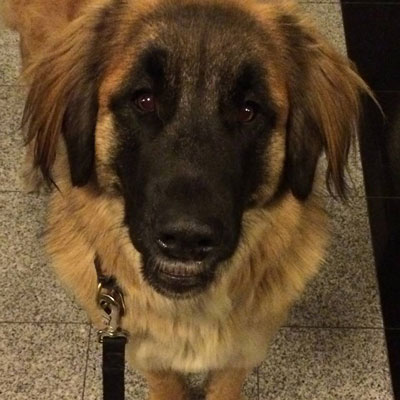 Miss Emily von Alpensee, 2 years old, is an exquisite, reasonably well-trained young Leonberger. This weekend, we’re going to see how she does in the conformation show ring.

As a newcomer, that means I’ve had to figure out how to “gait” her (essentially running with her on a leash in a straight line known as the “down-and-back” or in a circle), stack her (get her to strike a pose), and allow someone to lift her lip and peer at her teeth, which, my vet tells me, are perfect. Her toe fluff will be trimmed and she’ll be shampooed, conditioned, and puffed, making her even more beautiful than she is normally, if that’s possible.

But that’s not the hard part. The hard part of this whole thing for me will be getting dressed. Dog show attire is a prime, perennial target for ridicule. Remember “Dog Show Fashion Police, or that time the woman wore UGGs in the Best In Show ring at Westminster? People still talk about it, in hushed, sometimes terrified tones.

As Caroline Coile wrote in her guide to the ring—Show Me!—owner handlers, like me, “too often look like they’re off to slop the hogs, go to a funeral, do the laundry in a creek, or go to a nightclub.”

Since, except for the nightclub part, that pretty much describes my wardrobe, I prefer to concentrate on a different terror—falling in the ring.

It’s a real fear. “This is one of the only sporting events in existence in which the contestants may be running at full speed wearing a suit or dress,” says Coile. The wrong shoe could spell disaster, so that means pretty much anything with a heel is out. Running shoes are standard in agility, but they generally are teamed with jeans or running tights. For CGC training and testing, as well, pretty much anything will do.

What do you wear when you have to run next to your dog in a skirt?

Sensible shoes are the way to go, and that means flats. They have to be fastened on well enough so they won’t fall off my feet when I run next to my young, long-legged 90-pound dog. Ballet flats are out for me, because if they are loose enough to be comfortable, I lose them when I walk. If they are snug enough to stay on, they dig into the back of my heel, raising welts and blisters, which would make it impossible to smile at the judge.

Luckily, I discovered Mary Janes, plain shoes with a strap that holds them on. They come in black and other sensible colors, and some are produced by companies that have developed a reputation for mixing comfort with, if not high-fashion, at least a little style.

In the end, I chose two, a pair of simple black Mary Janes from Clarks, the kind of shoes that would certainly fit the “sensible” category. In other words, if offered to me in junior high school, I’d have fled to my room with shrieks and tears. I will certainly be able to run in these, even if I make the unwise decision to wear one of my pencil skirts.

Then, because they looked cute and were comfortable, I chose a second pair. These I’d willingly have worn as a teenager. It’s a pair of novelty Mary Janes from Hot Chocolate Design, a company “renowned for its mismatched shoes.” They are fabric, a black base with a design of iridescent blue, purple, and hot pink butterflies. Really cute. An hour after I posted the picture of them on my Facebook page, several female friends wanted to know where I got them. One guy I’d know for years left a one-word assessment: Sexy.

My butterfly shoes could certainly brighten up my show look, but I’m not going to wear them. For one thing, the Clarks really are more comfortable and less likely to result in a fall.

But what really got them the boot was a line on the company’s promotional materials: “Be different. Be unique.”

That’s not what this is all about. It’s not about me. I should be invisible. If I do this right, no one will look at my shoes or anything else I’m wearing.

If I do this right, all eyes will be on that glorious creature my side, Miss Emily von Alpensee.