It all started about seven years ago, when Jim Moritz, a mailman from Somerdale, New Jersey, was browsing Craigslist.

The face that caught his eye—and captured his heart—was Buddy, an 8-year-old Cocker Spaniel whose owner was moving to a place where she couldn’t have a dog.

The next day, Jim and his son, Daniel, who was about the same age as Buddy, visited the woman’s home for a meet-and-greet.

There was no way he could have predicted that this Cocker Spaniel, who was covered with fleas, was about to start them on an incredible journey. 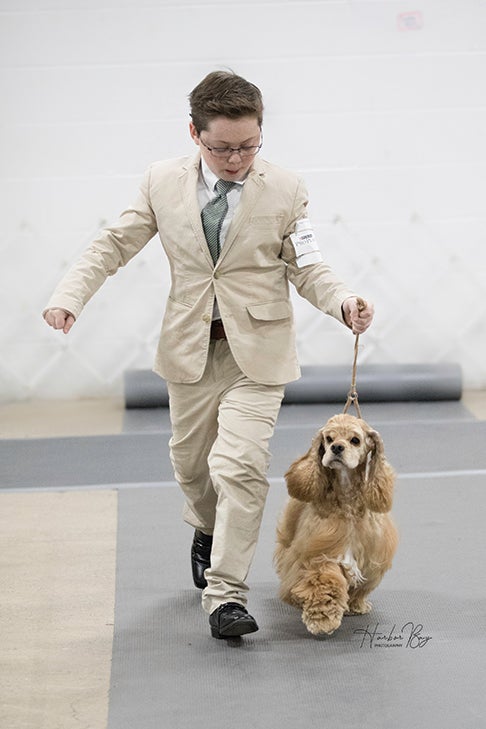 Jim grew to love the breed, so he and his son began spending time with the Southern New Jersey Cocker Spaniel Club (SNJCSC).

In 2018, Danny, Jim, and Buddy showed up at the club’s puppy fun match, just to watch. A club member there suggested they try some of the activities.

Just like that, they earned their first AKC titles.

Jim was stunned, and he wasn’t the only one. The Cocker crowd was very impressed with the newcomers.

“People saw how much Buddy looked at Danny, and did what Danny wanted of him, whether it was sit in a box or push the shopping cart,” says Vavolo. “You know, he didn’t practice for that. He just went in there and    did it.”

The SNJCSC sent a story about the team to the CGC evaluator’s newsletter. From there, they were featured in AKC Family Dog.

“I want to go a lot further with this,” Danny told a Family Dog editor at the time.

Jim, too, was bitten by the dog-show bug but didn’t know how to get started or whether, on his salary, he could afford it.

A Little Help From Friends

Then some amazing things happened. First, fancier Kristin O’Dowd offered Jim a retired champion—Beaker. He asked the price. She said no charge. “I thought, there’s got to be some kind of catch,” he says. “But that was it. They just wanted him to go to a good home.”

Beaker joined the pack, and Jim and Danny started visiting Vavolo regularly, helping out with her dogs and getting a crash course in Cocker Spaniels. “I learned to groom from Kim, just by watching her,” Jim says.

Danny told Vavolo that he wanted to do what she did—show dogs in conformation. He started weekly handling classes.

Cocker Spaniel people rallied around the newbies. One woman offered Danny show suits that her son, another Juniors competitor, had outgrown. Someone else sent grooming equipment; other exhibitors were generous with advice and support. 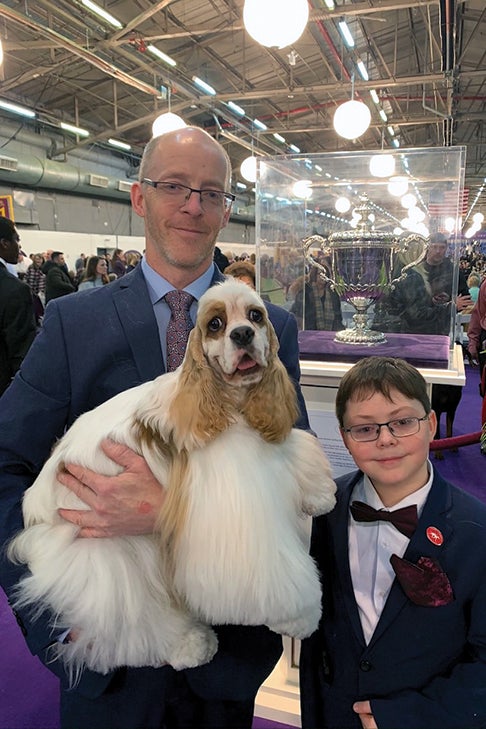 Danny and Beaker soon took their first steps into the Junior Showmanship ring and started earning ribbons. A little more than a year after the fun match that Danny entered on a whim, he and Beaker placed second in their class at the National Dog Show. In January, he was a cheerful, tireless ambassador for Cocker Spaniels at AKC’s Meet the Breeds event in New York.

Unlike many Juniors, Danny was not raised in a dog-show home, and his family is of modest means. But Vavolo, who has seen a lot of handlers in her 27 years in the sport, says he has something special.

“He has the want,” she told Family Dog. “He’s going to keep his nose to the grindstone.”

Vavolo says he also has another essential. “All the dogs love him.”

That was one reason why breeder Bettie Campbell agreed to sell Jim a show-quality puppy. The pup, Ice, is a son of Vavolo’s Chase.

“I think Danny and Ice will make a great team,” Vavolo says.

Family Dog caught up with Danny shortly after COVID-19 shut down dog shows everywhere. He was disappointed, but noted, “this is a great opportunity to get some extra practice.”

Buddy, now over 13, is still going strong, he says, romping around the yard with Beaker and Ice.

“If it weren’t for him, we wouldn’t have any of this,” Danny says. “I’m so glad we got Buddy, and that led to Beaker, and Beaker led to Ice. And all these dogs led to showing.”

Do you know a youngster like Danny who is interested in showing dogs? The AKC’s new “Conformation for Beginners” course, part of AKC Canine College, can help. It covers the basics of how a dog show works, what to expect, and how to get started showing your dog. The course is free and open to all.