‘When Harry Met Minnie’: The Fateful Story of Two Bull Terriers and Their Owners

Bull Terriers (and soulmates) Minnie and Harry cuddle up on the couch.

“When Harry Met Minnie: A True Story of Love and Friendship,” by Martha Teichner. Celadon Books. $26.99.

OK, admit it. When you see that book title your first thoughts turn to the popular 1989 romantic comedy, “When Harry Met Sally,” starring Billy Crystal and Meg Ryan. Some of the same elements are in this tender, affecting volume, also with a New York City backdrop.

No Crystal and Ryan here. The centerpieces are a pair of Bull Terriers whose owners morph into best friends on an accelerated timeline, since one’s health is failing rapidly due to liver cancer.

Author Martha Teichner, an Emmy Award-winning “CBS Sunday Morning” correspondent, and Carol Fertig, a notable interior designer, artist and fashion stylist, are polar opposites brought together by a mutual friend, Stephen Miller Siegel, with a sense of urgency who is, ironically, seemingly always late for every get-together.

Just to get things straight from the outset: Teichner owns Minnie and Fertig is Harry’s “caretaker.” Both enter this melodrama with plenty of emotional baggage, Teichner having lost Goose, her other Bull Terrier six months earlier, and Fertig, facing the daunting challenge of finding a home for 11½ -year-old Harry, her “money pit” with a profusion of ailments, before she passes.

The refreshing interplay between the two women is all about timing. A missed few minutes here or there and they possibly never meet after a chance encounter July 23, 2016 at the Union Square Farmers Market between Teichner and Siegel, who she recognized from walking with Goose and Minnie along the Hudson River at Chelsea Piers a couple years earlier.

Teichner describes their five-minute exchange: “Chance had just made us characters in a remarkable story, a very New York story about friendship and community . . . about life and death, as gloriously rich and funny as it inevitably turned out be achingly sad.”

Add to those ingredients: vibrant and enriching.

Studies have shown that strangers elicit more smiles, friendly glances, and even social interaction when they’re with dogs. Otherwise it’s a passing glance or inattention. Make no mistake about it, Harry and Minnie are the focus here, but they’re not playing those roles without the budding friendship and commitment from their owners.

Had the two not been Bull Terrier owners who knows whether this engaging narrative would have ever been written. (More on that later.)

For instance, Teichner writes, “Bull Terriers are odd dogs. With their egg-shaped heads, slitty eyes and pointy ears, they’re funny looking. Think Spuds MacKenzie or the Target dog.  BT’s are opinionated, exuberant, stubborn, extremely silly, and loving, but at times too smart for their own good. What does that say about Bull Terrier owners? Every BT person I’ve ever met admits liking that these animals are subversive by nature. So right away, I figured that I understood something about Carol and that we’d get along.”

In other words, it takes one to know one!

Author Martha Teichner relaxes with her Bull Terrier Minnie after a walk about the streets of New York City.

This was the late Carol Fertig’s favorite photo of herself with Harry, taken circa 2009.

Teichner’s depictions are dishy and personal, which add yet another invigorating dimension for readers in these crazy COVID times of masks and 6-foot rules.

Their early meetings involve play dates chiefly at Teichner’s apartment to determine the compatibility of the two BTs and to strengthen the budding friendship of the two women. It was a form of psychological pingpong for all four. These meet-and-greets eventually morph into sleepovers for Harry, doggie-cam observations, a trip to a nearby St. Peters Chelsea for a Blessing of the Animals, where neither dog demonstrates an interest in being blessed, and other outings.

As Fertig’s condition begins to decline, Teichner becomes the sole caretaker of Harry without committing she would become his eventual owner. In the process, Teichner maintains a diary to make certain she doesn’t overlook anything regarding Harry’s extensive care needs. 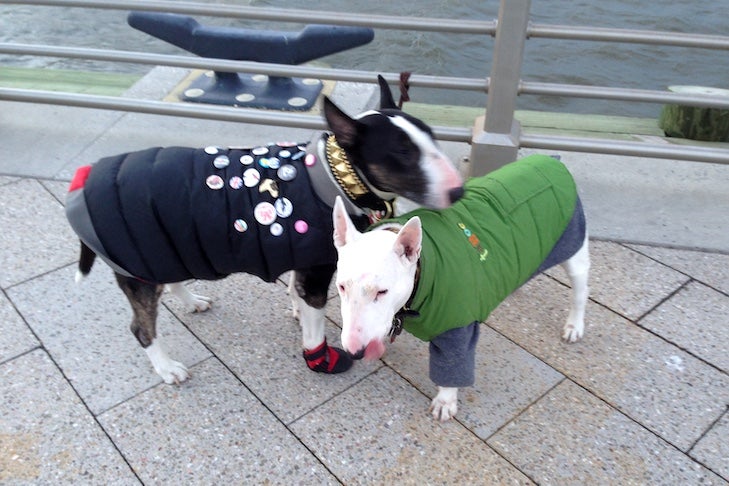 The two love mates pause together on a chilly day by the Hudson River.

This is a journey across a brittle landscape on which the two women travel together with humor and candor. In the process Teichner is embraced by Fertig’s wide galaxy of friends and becomes a family member in the process.

“I felt cheated that I had only known Carol for three months,” the author laments. “I was jealous of all the people who had been her friend for decades. I remembered the night she brought Harry over, that I said, ‘I wish I’d known you for 20 years.’ She replied, ‘Me, too.’ I felt cheated that there would be no more years. But we were friends, close friends there and then, and I was grateful.” It resembled a cognitive cul-de-sac.

Fertig’s longtime friend Siegel, who played matchmaker at the outset and late-arriving driver throughout, is the conduit throughout this narrative of intersecting lives fraught with memories, laughter, and pain.

Much of the heart and soul here is saved for frank bedside discussions between the two women before Fertig passes December 7, 2016. At one point, Teichner writes, “I didn’t know what to say. I had used up all my words,” as her BT buddy rested uncomfortably alongside with oxygen tubes in her nose while ecstatic her chief priority, Harry, was forever in good hands. 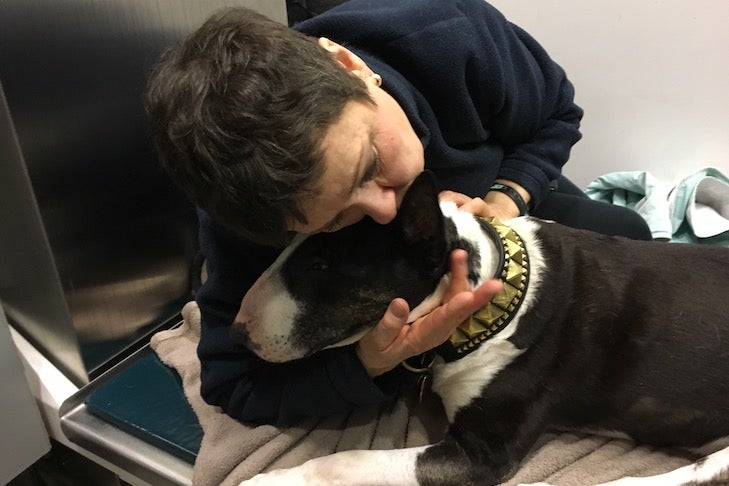 Teichner caresses Harry as she prepares to say goodbye to the aging Bull Terrier in late February 2018, 13 months after he had been diagnosed with cancer.

As one friendship reaches the finishing line, the four-legged pair continue to forge theirs, albeit short-term, too. But the Harry-Minnie love affair proves therapeutic for Teichner after the devastating loss of Fertig. Ironically, that doesn’t last long, either. On what would have been Fertig’s 71st birthday (January 19, 2017), Harry is diagnosed with cancer and passes 13 months later.

Carol’s and Harry’s memories remain all about Teichner’s apartment. Carol’s bequests assume a label: Bull Terrier-abilia – supplies, photos, paintings and knick-knacks. All exist in Carol’s image for Teichner. “They look like her sense of humor. I thought she touched them with her magic wand,” she maintains.

In a tender reminiscence, Teichner concludes, “Harry did love Minnie, and she loved him. He was like a guest, fashionable, with impeccable manners, who arrived with a lot of luggage and some complicated dietary needs, but filled our hearts and left too soon. Minnie misses him. So do I.”

P.S.: I reached out to the author after reading this work to inquire if she would have written it had Fertig not owned a Bull Terrier.

Her response: “I suspect not, because being Bull Terrier owners brought us together. The events recounted in the book might never have happened. Harry WAS a Bull Terrier, so the issue never came up, but knowing myself, and what a soft touch I am where dogs are concerned, I suspect I might have taken Harry even if he’d been some other breed or a mutt, as long as he and Minnie got along.”

Related article: Do Dogs Grieve Other Dogs?
https://www.akc.org/wp-admin/admin-ajax.php
Get Your Free AKC eBook