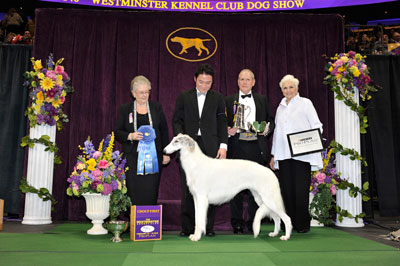 It was an exciting first night of the 2016 Westminster Kennel Club Dog Show presented by Purina® Pro Plan® on Monday, Feb. 15 at Madison Square Garden in New York, as winners of the Hound, Toy, Non-Sporting, and Herding groups were named.

CH Belisarius Jp My Sassy Girl, aka “Lucy,” a 3-year old Borzoi won the Hound group, with the Whippet, Saluki, and Beagle following in second through fourth, respectively. Lucy, who was the No. 1 dog in Japan last year, is owned by Mai Ozeki and was bred by Kyoto Ozeki of Japan. Virginia Lyne of Saanichton, British Columbia, Canada, judged the group. Lucy is fed Purina® Pro Plan® Focus Adult Sensitive Skin & Stomach.

In the Non-Sporting group, GCH Imperious Hamitup Southern Bell, a 3-year-old Bulldog was selected by judge Luc Boileau of Lake Geneva, Wisconsin as the winner. She was followed by the Dalmatian, the Standard Poodle, and the Boston Terrier. Annabella was bred by Suzanne and Rick Glover and Rick and Kelly Franz and is owned by Ellen Charles, Imperious Bulldogs, HamItUp Bulldogs, and Hetherbull. She is fed Purina® Pro Plan® Active 26-16 Sport Chicken & Rice.

As for the Herding group, GCH Lockenhaus' Rumor Has It V Kenlyn won the group that was judged by Dorothy Collier of Sapphire, North Carolina. She was followed by the Australian Shepherd, Border Collie, and Puli. Rumor, a 4-year-old German Shepherd Dog, is owned by Deborah Stern, Pamela Buckles, Patti Dukeman, Pam McElheney and Kent Boyles, and was bred by Pamela McElheney and Kent Boyles. Rumor is fed Purina® Pro Plan® Sport Performance 30/20 Salmon & Rice.

The Sporting, Working, and Terrier groups will compete Tuesday night before Best In Show.