After Surviving IED Blast Together, War Dog and Handler Reunite 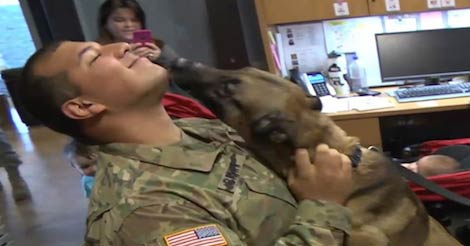 In December, a photo went viral showing Rocky, a military working dog, and his handler, Army Specialist Andrew Brown, recovering in a hospital bed together. Both had been injured when an IED exploded during a tour of Afghanistan.

As a sign of respect and solidarity, a Purple Heart was placed on Rocky. (Click here to read why dogs don’t receive Purple Hearts officially.)

One of our Military Working Dogs, Rocky, and his handler were injured this week during operations in Afghanistan. Rocky…

After the above photos were taken, Rocky’s treatment continued in Germany, while Brown recovered at Walter Reed National Military Medical Center in Maryland.

Last Friday, after undergoing multiple surgeries and physical therapy, Rocky finally returned to the United States and was reunited with Brown (scroll down for video).

Brown, who also underwent a lengthy recovery process and hasn’t yet returned to duty, found comfort in having Rocky with him again.

“I’ve known him longer than both of my sons have been alive,” he told ABC News. “I think we make a pretty good team—you know, you've got to have 100 percent trust in your dog.”

Rocky and Brown will spend quality time together as they continue to recover. It has not yet been determined if Rocky will be able to go back to work but if he is retired, Brown plans to keep him as a pet.

Rocky seemed to be in good spirits and health today when SSG Aldaco brought him home from Germany. After a quick stop at Walter Reed to visit SPC Brown, Rocky is finally home.