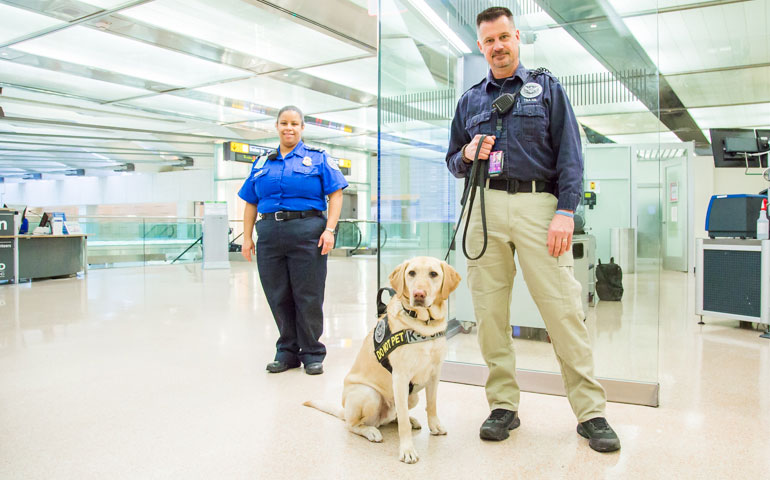 If you’re planning to travel by air this year, except to see more four-legged officials working the security lines at the airport.

The Transportation Security Administration (TSA) is more than doubling the number of canines they’ll have working at U.S. airports, the Washington Post reports, adding that currently, the agency has more than 140 Golden Retrievers, German Shorthaired Pointers, Vizslas, and Labrador Retrievers, among other breeds, working at more than 35 airports.

The dogs are trained to sniff out explosives, and often are stationed at the security checkpoints as well as the PreCheck line.

The news of the expansion of the K9 program comes just weeks after the “working dog” was named New York’s state dog, a gesture to celebrate the many different ways dogs serve and protect the public.

So why are dogs so successful using their nose to sniff out the bad guys? A dog’s nose has about 300 million smell receptors, compared with a human’s 5 million. (See an animated video of how a dog’s nose works.)

“Let’s say you have a cheeseburger. He can smell the ketchup, the bun, the burger, the pickles, bacon, mayonnaise—whatever’s on. He breaks it all up,” TSA K9 handler Michelle Ramos told The New York Daily News.

That ability, combined with the strong food drive and the high energy of the dogs selected, makes training a cinch.

“Dogs live in a world of smell. This is their primary sense,” handler Douglas Timberlake told the Washington Post. “They have the innate ability to keep the public safe.”

Want to know more about the individual dogs working for TSA? Follow the agency on Instagram, where the dogs are frequently featured:

#TSAOnTheJob – Meet Bart. He’s an explosives detection canine at the Kansas City International Airport (MCI). He’s been trained to find explosives, but it looks like he found Santa instead! See you in 2016. Oh yeah, good boy, Bart! #DogsOfInstagram #WorkingDogs

#TSAOnTheJob – Meet Maggie. Maggie works with her handler as an explosives detection canine at the Washington Dulles International Airport (IAD). Hundreds of canines and their handlers work hard around the clock to keep our transportation systems safe. Good girl, Maggie! #TSAOnTheJob #DogsOfInstagram #WorkingDogs

#TSAOnTheJob – Meet Bimbi. He retired yesterday at the ripe old age of 11-years and 10 months from the Honolulu International Airport (HNL). Bimbi has served as both a cargo and passenger screening explosive detection canine helping keep countless passengers safe over his career. He’s retiring in Hawaii and living with his former handler. Good boy, Bimbi. #DogsOfInstagram #WorkingDogs

#TSAOnTheJob – Meet Toro. Toro visited #Alcatraz Island this week for some training along with other canine teams from local and federal agencies. He works as an explosives detection canine at the San Francisco International Airport (SFO) with his handler, Nickolas. Hundreds of teams such as this one work hard weekly to keep our transportation systems safe. Good boy, Toro. #DogsOfInstagram #WorkingDogs