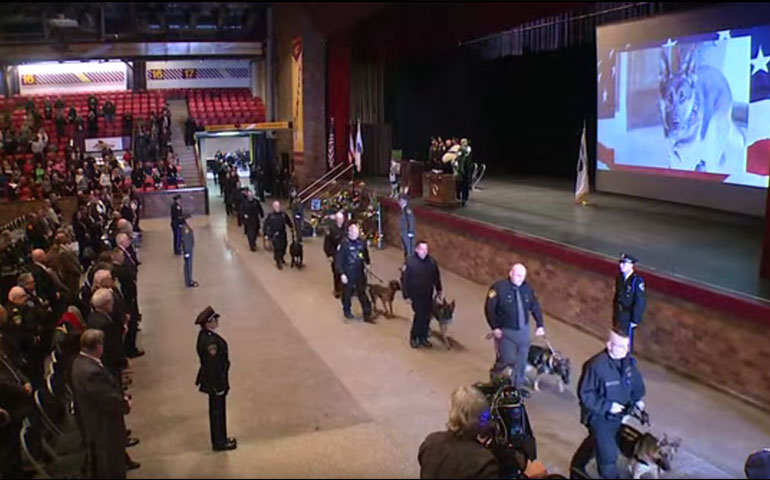 Yet another K9 is being buried this week. Three police dogs have been killed by gunfire in this month alone—a fourth also died in the line of duty by choking on an object.

On Saturday, January 23, at 1 p.m. CST, funeral services will be held for K9 Ogar, the latest K9 to be shot and killed in the line of duty this month. The service will be at First Baptist Church in Lindale, Texas. Ogar, who worked with the Smith County Sheriff’s Office, was killed on Tuesday, January 19, while pursuing suspect Michael Paul Koch, who fled on foot during a traffic stop and has not yet been captured. The sheriff’s office asks that anyone with information on Koch’s whereabouts contact them at 903-566-6600.

“It's a very tragic thing when something like this happens,” Lt. Gary Middleton told KLTV. “The dog lives and breathes with the handler and becomes part of law enforcement community…so in a sense, it's like we lost one of our own.”

Ogar’s death comes just after receiving a bulletproof vest from the nonprofit organization Vested Interest in K-9s. Constable Kenneth Bibby told AKC Ogar was not wearing his vest at the time of the incident, “however if he had it on, the impact area would not had been protected.”

On Thursday, January 14, hundreds of K9s and handlers from all over the country came to Canton, Ohio, to honor K9 Jethro as he was laid to rest. Jethro was shot four times when a suspect opened fire as police responded to a burglary on January 9. He succumbed to his wounds the next day. He likely saved his handler Ryan Davis’s life during the shootout.

See a video of Jethro’s service:

The next day, January 11, four-year-old K9 Krijger of the Norfolk Police Department in Virginia was shot and killed after a seven-hour standoff related to a domestic violence call. In response to Krijger’s death, former Navy SEAL Jimmy Hatch, who runs Spike’s K9 Fund, launched the K9 Krijger Ballistic Vest Campaign to raise money for bulletproof vests for Krijger’s canine colleagues. Anderson Cooper made a hefty donation to the fund, which paid for ballistic vests for the entire K9 unit.

See a video of Krijger’s service:

We thank all three brave dogs for their service and their sacrifice.