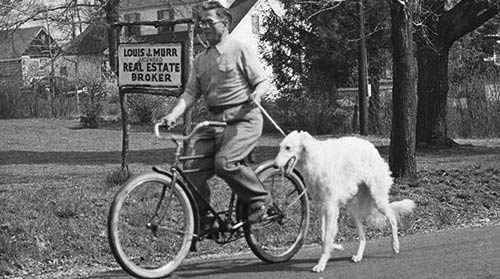 After much coaxing from a friend, a Greenwich Village antiques dealer reluctantly agreed to attend the Westminster Kennel Club show. If on that cold day in 1920 the antiques dealer had been more adamant or the friend less persuasive, a great career in dogs might never have been.

“It was my first show and I was entranced,” Louis J. Murr told Walter Fletcher of the New York Times. “Soon I was showing.”

Murr was born of Basque parents in northern Italy. The family came to America when Louis was 14. He served in the Army during World War I, and then opened his antiques shop on West Fourth Street.

Through the 1920s Murr learned the dog game. He acquired his real-estate license and moved to Spring Valley, New York, 22 miles north of Manhattan. There he built his Romanoff Kennels into America’s most influential Borzoi line.

He got his big break in 1929, when he bought Ch. Vigow O’Valley Farm. The O’Valley Russian Wolfhounds, as Borzoi were known in America until 1936, were of stock imported from the kennels of Russian aristocrats. This was the first of several Vigows for Murr, who embraced the sport with the zeal of a convert. At its height, Romanoff housed 90 Borzoi.

The first Vigow sired Ch. Vigow of Romanoff, called—“by most authorities,” Fletcher assures us—the greatest Borzoi ever bred in this country. He was never defeated in breed competition, and his 21 Bests in Show is still a Borzoi record. In 1935 Vigow won the AKC’s first Best American-Bred award, and, as if to prove a point, Murr’s haughty white hound won it again in ’36.

After Romanoff dogs took the group at Westminster in 1942 and ’43, Murr decided to become a judge. A revered and sometimes feared all-rounder, he was among those who could vie for the title “Mr. Westminster”—he judged at the Garden for 21 straight years.

As Fletcher reported, Murr ran a tight ring: “Murr would put up a class dog as quickly as a champion. ‘I judge them according to the standard and not for their pictures in dog magazines,’ he maintained. … He wouldn’t tolerate a steward chatting idly with spectators. He was tolerant of amateurs but a professional handler had to follow his instruction to a T, or take a verbal lashing.”

During his 56 years in the sport, Murr played many roles—breeder, exhibitor, judge, AKC Delegate and Board Member, parent-club president—but Karen Staudt-Cartabona remembers him best as a mentor. Her Majenkir Borzoi line goes back through Murr’s Romanoff stock all the way to the O’Valley hounds from tsarist Russia.

“Mr. Murr maintained it took him 40 years to perfect his ideal and create his main line,” she says. “He explained that when it was necessary I should breed out, but to always breed back on, and stay with the main line, as it would never do me wrong. It never has.”

Murr judged his final show in 1976. Two years later, the diminutive real-estate man who cast a giant shadow in the ring died at 84.

“Louie Murr was a great storyteller,” Staudt-Cartabona says. “I soon realized that each story was actually a parable. Over the years, I have often recalled small bits of advice that still prove invaluable.”

Murr, who could rightly lay claim to the title “Mr. Borzoi,” actually hated the name Borzoi and went to his grave calling his dogs Russian Wolfhounds. For more on the Borzoi versus Wolfhound debate, see “The Great Borzoi Controversy“.