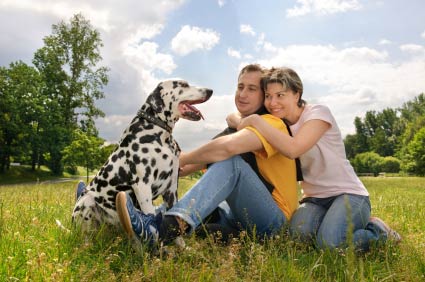 Whenever a new study comes out proving that dogs are exquisitely attuned to our emotions and highly skilled at reading our body language, the general reaction of dog owners is, “well, of course! Everyone knows that.”

People who live with and love dogs may believe in a dogs' sensitivity to human emotion, but scientific research is needed to provide the solid evidence.

A new study published in Current Biology does just that. Conducted by the Messerli Research Institute at the University of Veterinary Medicine Vienna, the study asserts that dogs can tell the difference between an angry human face and a happy one. Even more exciting is that it reveals that a non-human animal is able to make this distinction in a species other than his own.

Ludwig Huber, the senior author and head of the research group, told Current Biology, “Our study demonstrates that dogs can distinguish angry and happy expressions in humans, they can tell that these two expressions have different meanings, and they can do this not only for people they know well, but even for faces they have never seen before. Another one of the researchers, Dr. Corsin Müller, says, “We think the dogs in our study could have solved the task only by applying their knowledge of emotional expressions in humans to the unfamiliar pictures we presented to them.”

The researchers trained dogs to discriminate between images of the same person making either a happy or an angry face. In every case, the dogs were shown only the upper or the lower half of the face. After focusing on 15 pairs of photos, the dogs’ ability to differentiate was tested using four criteria. (As with most studies, the process was fairly involved. See the abstract above for details.) The researchers found that in every case the dogs were able to select the angry or happy face more frequently than could be expected by random chance. And not only did the dogs learn to identify facial expressions, they were also able to transfer this knowledge to new training.

It’s difficult to know exactly what dogs make of the different emotional expressions, but Dr. Müller thinks it’s what we dog owners would probably guess, too: “ … it appears likely to us that the dogs associate a smiling face with a positive meaning and an angry facial expression with a negative meaning.” It took the dogs in the study longer to associate an angry face with a reward. This suggests that their prior experience told them to steer clear of people when they look angry.

There have been numerous other studies conducted in the past decade to determine if, and how much, dogs and other species can understand how we’re feeling. This team will continue to study how dogs’ experiences inform their ability to recognize human emotions. Next up for them: A study of canine emotions, and how human emotions can impact them.

“We expect to gain important insights into the extraordinary bond between humans and one of their favorite pets, and into the emotional lives of animals in general,” Müller says.

Study in Sum: The researchers say the study demonstrates that:

More on the intersection of canine- and human emotions and thinking:

Study: Owners Use Dogs to Aid with Family Discourse