See A British Military Dog Gear Up For Front-Line Training 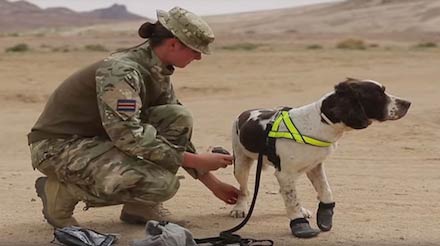 When it comes to their canine soldiers, Britain’s 105 Military Working Dog Squadron (MWDS) knows that the best protective equipment is essential, even during training.

In a recent video by the MWDS, a dog is outfitted with personal protection equipment, including ear defenders, goggles, a reflective collar, and booties.

This English Springer Spaniel is among 35 dogs recently sent to Jordan for a training exercise.

“It's really important to train away from your home base,” says Major Ross Curnick Royal Army Veterinary Corps. “It allows you to practice moving your animals, your people, your equipment… to prove we have the ability and capability to deploy and work anywhere in the world.”

The safety of dogs working in police and military roles has become a hot topic over the past several months following the death of Diesel, a French K9 killed during a raid related to the November 13 terrorist attacks in Paris last year, as well as the killing of multiple police dogs while on duty in the U.S. earlier this year.

Recently, Russia introduced advanced new body armor for its working dogs. The two-part system, created by Russian defense company Scientific Production Association of Special Materials, covers the chest and neck of the dog and can be expanded to cover the head and legs if necessary. The armor can protect against stabbing, bullets, and explosive fragments, the company says.